The Cloned Queen is a cloned Xenomorph Queen and one of the two main antagonists (along with Mason Wren) of the 1997 film Alien Resurrection.

The Cloned Queen was a clone of the Xenomorph Queen whom gestates in Ripley's body after she was impregnated by a facehugger at the beginning of the events in Alien 3. Not wanting Weyland-Yutani get their hands on the queen and cornered by Bishop and his men, Ripley took an extreme measures by slowly and gracefully let herself fall towards the molten lead. The queen erupted from her chest, but she still had enough strength to hold onto it as they were taken by the lead, resulting the death of both of them.

However, Ripley's sacrifice was temporarily in vain as samples of Ripley's blood were recovered from the facility. After Weyland-Yutani was bought out by USM, the United Systems Military took control of all the weapons and R&D interests previously held by Weyland-Yutani and attempted to resurrect the Xenomorph race through the use of Ripley's DNA that contained the Xenomorph embryo. It took two hundred years and seven attempts to successfully clone Ripley on the medical vessel USM Auriga. The eighth clone produced was dubbed Ripley 8, with the Queen herself inside her body that later surgically extracted and used to create more Xenomorphs.

The queen indirectly responsible for the breakout in USS Auriga by telepathically ordered one of her children to killed each other so their blood could create a hole to escape and free the others. Once they succeed, they later free her and she established a hive within the ship.

Over the course of the chaos which caused the ship automatically set the course to the Earth, The Queen underwent a drastic transformation in its reproductive methods by changing its eggsack into a womb. As a result, it ceased laying eggs and instead gave birth to live offspring without the need for eggs and human hosts.

The Queen proceeded to give birth to a new form of Human-Xenomorph hybrid called the Newborn, while being witnessed by both her surrogate mother Ripley 8 and Dr. Gediman who was taken by the Xenomorphs earlier and was cocooned to the walls. The Newborn proceeded to talk to the Queen through low growls.

Due to bearing a mixture of human and Xenomorph traits, the Newborn recognizes Ripley 8 as its mother and kills the Queen by decapitating her with a single slap, much to Gediman's shock.

She behaves much similar with her original versions, as her memories and gene passed genetically. However, when realized that the gene-tampering that done for her creation caused her generated egg-sack turned into womb, she considered the embryo inside it as her child much like other xenomorphs. Unfortunately, this proved to be her downfall as the newborn ultimately killed her with a single slap. 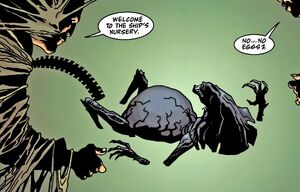 The comic depiction of the Cloned Queen. Noted that unlike in the film, instead of having her eggsack modified into a womb, the womb is located on her midriff just like a human female.