Member of the Elders of the Universe

Keeper of The Collection and its musem

Expanding his collection by collecting and obtaining more and more objects.

Expand his collection by collecting and obtaining more and more interstellar fauna, relics, and species.

Egotistic Cosmic Entity
Taneleer Tivan The Collector, is an anti-heroic supervillain appearing in the Marvel Comics universe. He is one of the eldest beings in the universe and his own species at Cygnus X-1 are the first to evolve after the Big Bang, a member of the Elders of the Universe, and a powerful cosmic being who is the obsessive keeper of the largest collection of interstellar fauna, relics, and species of all manner in the galaxy, and he seeks to expand this collection by collecting and obtaining more and more objects.

Death took Tivan as the last surviving representative of the species and gave him total immortality. Tivan, as well as one representative of each of the first species of the Universe, cannot die. These people have associated among themselves to create the Elders of the Universe. As they are relatively few, they call each other "brother". Tivan spent his first millenia of existence with his wife Matani and daughter Carina in a planet he chose as HQ. Carina eventually reached maturity and left them. After this, Matani died because of mysterious causes. Tivan, who had thought that Matani was as immortal as him, could not resist it.

He eventually understood that a factor in an Elder's immortality was the will to live, and that Matani had lost hers. Tivan then decided he would not suffer the same fate, and looked for a goal to dedicate his life.

Tivan then had a vision seeing powerful things that would rise, determined to destroy the universe. He decided to avoid this from happening and that he would dedicate his life to collect artifacts and living beings throughout the universe to place them out of danger. Then, after the destruction of the universe, he could re-populate it and bequeath the knowledge and cultures from past. He built a great spaceship and began his work, stopping in every world to get a sample of its greatest achievements, as well as living representatives of each of their life forms.

In a matter of years, the ship was full and he had to stop his mission to collect expanded facilities for his "permanent collection". Using robo-mechanics bought on planet Cron, the Collector transferred his collection. Every time his ship's hold was full, the Collector would return to his museum-worlds to place the new samples. He has currently filled in ten museum-worlds with artifacts from one hundred thousand planets. With the passing of eons, his monomania became more obsessive, until he forgot the original reason of his collection.

In recent years, the first of the powerful beings in his prophecies, Thanos of Titan, was born and eventually defeated without the Collector's intervention. Meanwhile, the Collector had had his frictions with heroes from the Earth, including Daredevil.

The second of the threats was Korvac of Earth. Tivan, then known as the Collector, contacted his daughter Carina and sent her to spy Korvac. The intelligence led to the Collector attempting to report to the heroes of Earth. However, Korvac found the Collector before he could do so, and destroyed him. Korvac was, anyhow, eventually destroyed.

Resurrected, the Collector returned to his previous task and he also predicted the attempt of Surtur to destroy Asgard. However, Surtur was also stopped without the Collector's intervention.

The Collector eventually resurrected the Grandmaster in a complex scheme including the Avengers fighting the West Coast Avengers, each team following one of the elders and believing the other one was a villain.

The Collector then joined the other Elders in the Grandmaster's scheme to kill Galactus. Thus, the existing universe would collapse. The Elders would survive the big crunch and the subsequent big bang of a new universe, becoming Galactus-like beings in the new universe. The scheme failed, but the Collector had become one of the threats to the universe he had once predicted and against whom he had schemed.

The Collector attempted to collect every major hero of Earth except for Hulk and Spider-Man, who he saw unfit for his collection after receiving altered information from J. Jonah Jameson. In the end, he was stopped by Spider-Man and Hulk, who rescued the captive heroes. 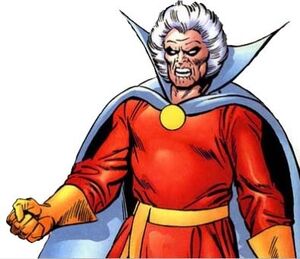 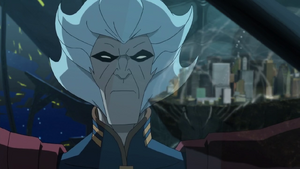 The Collector in Ultimate Spider-Man.