NOTE: This article is about the incarnation of the Collector from the Marvel Cinematic film series. The mainstream version can be found here: The Collector (Marvel).

Alien Collector and a member of the Elders of the Universe

High intelligence in cosmic artifacts like the Infinity Stones

Collecting things from all types.

Find out about the Infinity Stones and collect them in order to complete his own collection (failed).

Taneleer Tivan, also known as The Collector, is a recurring character in the Marvel Cinematic Universe, serving as a cameo antagonist in Thor: The Dark World, a major antagonist in Guardians of the Galaxy and a cameo character in Avengers: Infinity War. A version of him also appears as the main antagonist of "What If... T'Challa Became a Star-Lord?", the second episode of the Marvel animated anthology series What If...?.

He is the obsessive keeper of the largest collection of interstellar fauna, relics and species in the galaxy by operating in a cosmic place named Knowhere. He is the estranged brother of the Grandmaster and the self-serving former master of Carina.

He is portrayed by Benicio del Toro, who also played the title character in the 2010 remake of The Wolf Man, Dario in License to Kill, Jack Rafferty in Sin City, Aaron Hallam in The Hunted and DJ in Star Wars: Episode VIII - The Last Jedi.

He made a minor appearance in the mid-credits scene of the film following the deaths of Malekith and the Dark Elves. He is tasked by Sif and Volstagg to protect the Aether (the Reality Stone) and keep the stones separated, because it would be dangerous. After they leave, Tivan utters the phrase, "One down, five to go", implying that he plans to collect all six of them for his collection.

Tivan struck a dubious bargain with Gamora, former assassin and agent for the Kree fanatic, Ronan the Accuser, to retrieve the stolen Orb for 4 billion units, which contained a cataclysmic Infinity Stone that Ronan desired. Gamora arrived at Knowhere with her companions, Peter Quill, Rocket Racoon, Groot and Drax the Destroyer. Drax was not present, but before their arrival, The Collector informed his attendant Carina that they had visitors and threatened her by reminding her about the result for the disappointment his previous attendant had been. Once the Collector reminds Carina of this, she gets back to work to prepare everything for the arrival of their guests.

Later, when Gamora and her team arrived, Tivan was presented and greeted Gamora, when his attention was then caught by the tree alien Groot. When Rocket commented on Tivan, he mocked him, calling him a "pet" due to his racoon appearance. Gamora broke it up and showed Tivan the Orb containing the Power Stone. Tivan explained the origins of the Orb and the destruction power that the Infinity Stones contained, much to the boredom of Rocket, who instantly demanded their payment for bringing the Stone.

Before Tivan was about to make the payment as promised, Tivan spotted Carina approaching the Power Stone. Ignoring his warning to step away from the powerful stone, Carina yells "I WILL NO LONGER BE YOUR SLAVE!" and grabbed the stone, despite Tivan's protests. Unfortunately, this causes the Stone to destroy most of Tivan's collection and kill Tivan's servants (including Carina herself) while Gamora, Groot, Tivan, Quill and Rocket survived and escaped. The Power Stone later ended up in the hands of the Nova Core of Xandar after Ronan's death.

In a post-credits scene, a depressed Tivan is seen sitting in his destroyed archive with two of his still living exhibits: a canine cosmonaut named Cosmos and an anthropomorphic duck named Howard.

In the film, Tivan is confronted and threatened by the mad alien warlord Thanos, who intends to take the Aether by force during his quest to collect all six Infinity Stones for himself, much to Tivan's distraught.

Upon arriving at Knowhere and witnessing Thanos torturing Tivan, the Guardians attempt to ambush Thanos in an attempt to kill him and save Tivan. However, they soon learned too late that Thanos has already obtained the Aether and that the entire scene was an illusion to lure them into a trap as Knowhere is currently being burned down. This allows Thanos to kidnap Gamora to coerce her into giving out the location of the Soul Stone.

The Collector has been revealed to have survived Thanos' attack on Knowhere and the Decimation.

The Collector meets Lady Sif and Volstagg after Carina introduces them.

The Collector holding the Aether in his possession after being advised by Lady Sif and Volstagg to safeguarded it; Unbeknownst to them, The Collector had been seeking the Infinity Stones with the Aether now in his collection.

The Collector summarizes to the Guardians about the Infinity Stones.

The Collector having a tranquilizing drink after surviving the explosion upon licked by his pet dog, Cosmos to cheer his spirits in which the action was being mocked by Howard the Duck.

The Collector being interrogated by Thanos. 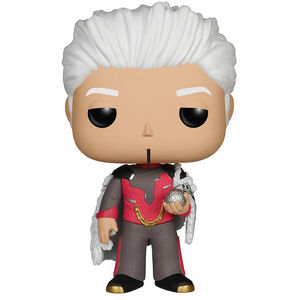 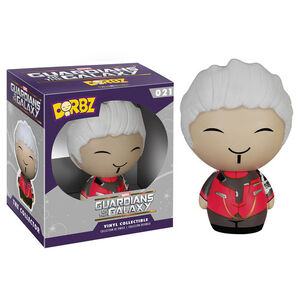