Torturing.
Experimenting and "collecting" people.
Mutilating people and shaping them like insects.

Kill as many people as possible and add the only-alive victim to his collection (succeeded for a while).

You'd better be prepared. Give it everything you got. 'Cause if he catches you, he's gonna make you wish you were dead.Arkin O'Brien, describing The Collector in the second film.

The Collector's first and last words of the series.Are you here to kill me?

The Collector is the titular main antagonist of the 2009 horror film The Collector and its 2012 sequel The Collection, and he is one of the most sadistic villains in cinema, even by horror standards, willing to murder and "collect" dozens (maybe hundreds) of people to satisfy his sickening urges. He always wears a mask to hide his identity.

He was portrayed by Juan Fernández de Alarcon in the first film, and Randall Archer in the second film.

The man who would become the Collector was the son of a museum owner and entomologist. One day, the father went insane due to digesting chemicals meant for taxidermy and killed his family, stuffed them, and then placed them at the table on Thanksgiving and ate with them as though they were still alive. Only his son survived, but the experience warped his mind.

Later on in life, the Collector would himself become a licensed entomologist and presumably led a legitimate life, but underneath this was a murder and kidnapping operation, in which the man, called "the Collector" by the authorities and his victims, would target whole families and kill all but one member, who would have the misfortune of becoming a part of his "collection", and would either be killed through gruesome experiments (after which his/her body parts and bones would be reassembled to look like insects) or driven completely insane. The collection was kept at an abandoned hotel, which was rigged with traps to kill off any would-be escapees and intruders.

In the first film, the Collector targets an old couple named Gena and Larry, killing Gena while stuffing Larry in a red trunk and adding him to his collection. Later, he arrives at the home of the Chase family, posing as an exterminator to gain access to their house. Before he begins his assault, he places his traps systematically, locks all the doors and boards up the windows to prevent any escape. He begins by dragging Michael to the basement, chops his ear off, disembowels him and hangs him by his feet. When Arkin tries to escape with Victoria, she bumps into the Collector, who chains her to a gasoline-filled bathtub and sews her mouth shut, which kills her. He later watches Jill and her boyfriend Chad have sex on the kitchen table seeing that Jill has some body parts to add to the collection before they notice him watching. Chad attacked him and was killed when the Collector pushed him into a room filled with several bear traps. He then captured Jill, but not before she was able to make a 911 call (she escapes but is shot with large nails when she triggers a trap).

He is stopped from killing (or presumably collecting) the last member, Hannah, by ex-convict Arkin O'Brien (who is there to steal a ruby), who prepares a trap with Hannah to electrocute and kill the Collector. However, the Collector saw this coming and used Larry as a decoy, so the trap killed Larry instead. Arkin sends Hannah down a laundry chute where she hides, but the Collector attacked Arkin before he could go down the chute. During the ensuing struggle, Arkin rips off his mask, seeing his unknown face. The Collector knocks out Arkin and drags him to the basement, where he hammers off a tooth and allow roaches to feed off of a wound on Arkin's belly. The Collector is drawn outside by a police officer responding to Jill's 911 call, who confronts the Collector at gunpoint. The Collector distracts him long enough for his attack dog (seen near the beginning of the film) to kill him. He then takes the dog with him into the house to hunt down Arkin and Hannah, after Arkin frees himself from his binds. Once the collector re-enters the home, Arkin manages to kill the Collector's dog and lure the fiendish man into one of his own traps, supposedly trapping the Collector inside the house. Arkin and Hannah then escape the house, which detonates from the explosions; the Collector is seemingly killed in the explosion.

Unfortunately, the Collector was not killed, as he had escaped the trap and ambushed the ambulance carrying Arkin. He rams into the ambulance with his van, which proceeds to flip it over several times until it lands upside down, which reveals to Arkin that the Collector had escaped and is now ready to finish what he had started. He then kills the paramedic, kidnaps Arkin and locks him inside the red trunk, therefore adding him to his collection.

The film ends with a post-credits scene with the Collector sitting on the trunk watching film slides, with Arkin (inside the trunk) swearing that he will kill him. The Collector responds by kicking the trunk to keep him quiet.

In the sequel, the Collector kills a large number of teenagers at a party by shredding them with rotating blades, impaling them with swords, and squishing them with a falling ceiling. He kidnaps Elena, the daughter of a wealthy socialite, while Arkin manages to escape the red trunk alive, but breaks his arm in the process. Elena's bodyguard, Lucello, forces Arkin to lead a team of mercenaries into the hotel where the Collector keeps his victims to rescue Elena in exchange for terminating his criminal record. The mercenaries are either killed or captured one by one while they encounter murderous people driven insane with drugs, a bomb that detonates while attached to a teenage boy named Basil, wild attack dogs and a young girl named Abby, who is the Collector's favorite and refuses to break his rules. Elena manages to escape the trunk she had been stuffed in on her own, inside an autopsy room, and tries to find an exit, while Arkin separates himself from the group; he sees various people, all mutilated into insect-like appearances and presented in glass tanks while trying to find an exit. Eventually, only Arkin, Paz, Lucello, and Elena are still alive.

The Collector decides to burn down the building and traps all four in several different traps. Paz, Arkin and Elena escape and head for an exit. However, the Collector ambushes them, kills Paz and easily beats Arkin in a fistfight thanks to his broken arm. As he was about to kill Arkin, Lucello intervened, having escaped his trap. Lucello engages the Collector in a knife fight, but loses and is killed, but not before he hold the Collector in place, so that Arkin can stab him in the leg and gain the upper hand. The Collector is then beaten savagely, thrown down a chute (that has a pile of corpses and amputated limbs at the bottom, doused in gasoline) and set on fire by Arkin before the latter escapes with Elena. After the fire is put out, the police inform Arkin that no body was found, and he finds the Collector's charred mask in one of the many trunks.

Sometime later, The Collector returns to his home and turns on the radio where his past is heard. He checks his mail and goes upstairs but hears his radio suddenly change and arms himself with a switchblade as he finds several red trunks in the room. A gun is held to the back of his head, Arkin has tracked the Collector to his house and threatens him. He reveals his knowledge of The Collector's background and states locating him wasn't hard since he lived nearby from the last spot they met. Arkin gets the latter to face him (though the audience still can't see his face, Arkin can) as The Collector asks Arkin "Are you here to kill me?" (his only spoken line of dialogue in either movie), to which Arkin responds that'd be too nice and states he is going to put the Collector through the same torture that he subjected Arkin to before killing him. The Collector tries to attack Arkin with his switchblade but Arkin pistol whips and knocks him into his own red trunk and repeatedly slams the lid on his fingers before sealing him inside.

His further fate is left unknown, though it is possible that Arkin made good on his promise and tortured the Collector before killing him. It is also possible the Collector could have found a way to have escaped too.

An alternate end credits show Arkin driving to a seemingly abandoned house where Elena waits in the garage with many implements of torture. This implies they are both planning on torturing the Collector.

Despite the Collector's face never being seen (since he shields it with a tight-fitting foam-latex mask with rips for eyes and a mouth, tied behind with drawstrings), it is clear that he is a large white male with brown hair and gray eyes, though they glimmer an insectoid green in the first film. He usually wears black pants, a black long-sleeved shirt, a black leather belt containing knives and a pair of keys, black leather shoes and a pair of black nitrile gloves.

The Collector shares similar traits of most serial killers in horror cinema; intelligent, insane, murderous, destructive, sneaky, cruel, savage, merciless, aggressive, emotionless, and violent. A mentally deranged and brutal man, the Collector scopes out his victims by posing as an exterminator, giving him easy access to his victims as well as allowing him to plan ahead of time on where to place his traps. The Collector then kills his victims by locking them in their own homes and killing them in various gruesome ways.

His traps, which can vary to various rigged objects (golf club, trip wires, scissors), are lethal and extremely dangerous. Being an entomologist, he is very fond of insects (he is seen in the first film saving a dying spider) and those that are part of his 'collection' have their body parts re-arranged to resemble insects. The Collector is often and perhaps solely aided by bloodthirsty attack dogs, seen in both films. 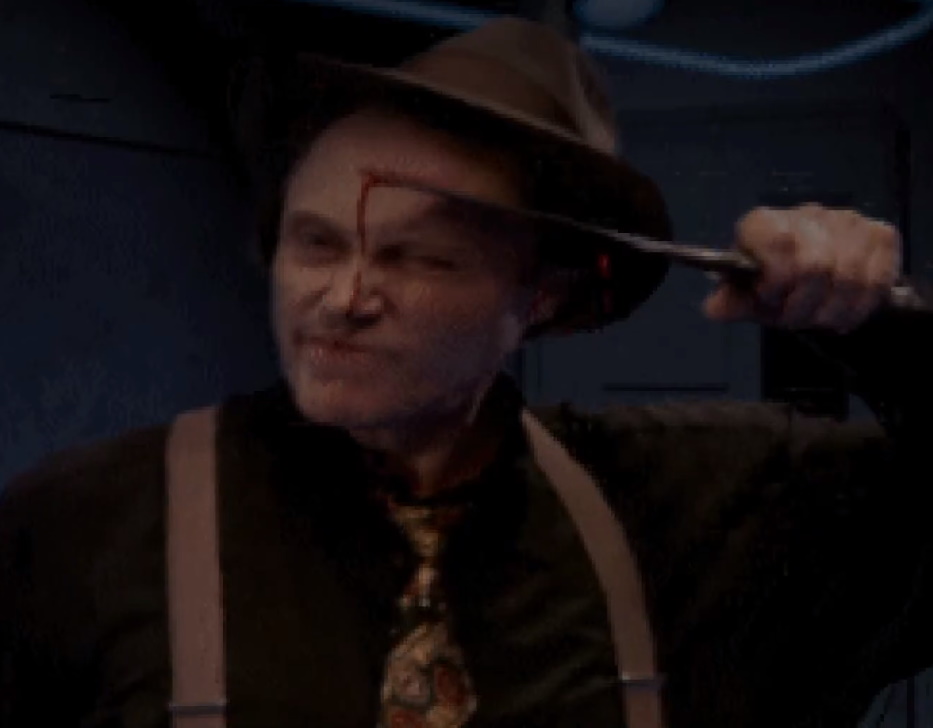