Villains Wiki
Register
Don't have an account?
Sign In
Advertisement
in: Spoilers, The Owl House Villains, Fantasy Villains,
and 54 more

The Collector (The Owl House)

The Grand Huntsman
Round Boy (by Belos)
Collector Kid (by Luz)
Mr. Collector (by King)
Child from the Stars (by Kikimora)
Enzo Gabriel (by Brazilian fanbase)

Deity of the Titan Trappers

Causing chaos.
Playing "games".
Annoying and teasing Belos (formerly).
Seeking anyone to "play" with him.

Escape from his imprisonment in the mirror (succeeded).

The Collector, also known as the Grand Huntsman, is the overarching antagonist of the Disney Channel animated series, The Owl House. He is a mysterious deity and the figurehead of the Titan Trappers, imprisoned in a mirror within the Boiling Isles who came in league with Emperor Belos, intent on gaining freedom on the Day of Unity.

In the Season 2 finale, after Belos betrayed him on the Day of Unity, the Collector was freed by King, Eda's adoptive Titan son. He then destroyed and possibly even killed Belos and began his "playtime" with King in tow, wreaking havoc on the Demon Realm while Luz Noceda and her friends escaped to the Human Realm.

He is voiced by Fryda Wolff who also voiced the Enchantress in Avengers Assemble, Poison Ivy in DC Super Friends, The Matriarch from Killing Floor, and Faora from Justice League Action.

According to Kikimora, the Collector is not witch or demon, but a child-like entity coming from the stars. According to both Eda Clawthorne's dream and the contents of Titan Trapper Island, the Collector took the form of a robed poacher in the Demon Realm's past, hunting down Titans with help of the Titan Trappers and converting the Owl Beast into a curse that would later infect Eda. During this hunt, King's father managed to seal the Collector away in the In-Between Realm, however at the cost of his own life as his corpse became the Boiling Isles. A moon-emblazoned mirror, the key to freeing the Collector from his prison, was kept in the Titan's skull guarded by a beast named the Stonesleeper.

Eventually in the Boiling Isles' Deadwardian Era, Emperor Belos (in his original identity of Philip Wittebane) went on an expedition to the Titan's skull where he evaded the Stonesleeper and obtained the Collector's mirror. After activating it and conjuring the Collector's spirit, Belos was told by him a "Draining Spell" that could fatally reap the magic of witches. Upon becoming the Isles' emperor, Belos plotted the "Day of Unity", a ploy to assemble every witch on the Isles and kill every single one of them with the Draining Spell, after which he would fulfil his end of the deal using Titan's Blood to free the Collector.

Centuries later in the present, Eda's apprentice, Luz Noceda, and Belos' grimwalker subordinate, Hunter, temporarily find themselves in the emperor's mind in the episode, "Hollow Mind", where they discovered of the Collector's existence and allegiance with Belos. After escaping, Luz, King, and Hooty travel to Titan Trapper Island in "Edge of the World" for help against Belos, only to discover both King's titan lineage and that the trappers worship the Collector. The trio swiftly escape the island, but not before King makes a psychic connection with the Collector in a botched ritual sacrifice by the trappers.

In "O Titan, Where Art Thou", King enters the In-Between realm in his dreams where he finds the Collector imprisoned inside an orb. The Collector goes into an insane rambling on how he's almost free and how he won't be alone anymore. When King calls out to the entity, the Collector's silhouette appears on the orb, where he notices King. King backs up only for the Collector to begin panicking and begging him not to leave, knowing he'll wake up soon, but King wakes up anyways.

In "Clouds on the Horizon", the Collector accompanies Belos as the latter sets up the functioning Portal Door in the Titan's skull, exactly where he found the Collector centuries ago. The Collector sadistically asks Belos if he's nervous to return home, bringing up the facts that the Human Realm must've changed drastically, and that Philip himself has changed in the measures taken to extend his lifespan. Angered, Belos tries to attack the Collector by morphing his arm, but misses.

The Collector rejoices at the fact he will soon be free from his prison, stating there are "so many games" he wants to play once liberated. He adda that, if he and Belos require a third player, another Grimwalker could be made; Belos rejects this idea, saying he will only make another once Hunter is dealt with. The Collector then painfully begs Belos to release him early, whining that the human did promise. Belos also rejects this, saying that the Draining Spell must first work, which the Collector himself promised in the bargain. The entity grumpily remarks that Belos should have more faith in pinky swears. The Emperor then says their partner's patience will be rewarded, as the Day of Unity is merely 24 hours away. The Collector watches with Belos as witches from all over the Isles approach the Titan's head, grinning widely.

Later, King once more hears the Collector's thoughts; he is talking to himself and expressing doubt that Belos will uphold his end of the bargain. The Collector desperately tries to convince himself that the Emperor is his friend, but notes that the two of them have spent centuries "playing [Belos'] game", and angrily states he wants to play a new game. In "King's Tide", the Day of Unity finally comes, and the Collector is excited by the prospect of freedom.

However, Belos reveals that he won't be releasing him, both because he's only using the Titan's Blood from the key to activate the Portal and because he doesn't want anyone else learning about their powerful spells, and instead drops his mirror down a pit in the Titan's skull. Later in the episode however, while Luz and her allies battle Belos, an equally betrayed Kikimora brings King down to the pit. There, he makes a deal with the Collector to free them and play a game of "Owl House" in exchange for ending Belos' Draining Spell. King uses his Titan powers to break the Collector's mirror, allowing him to escape it and regain his physical form, before he stops Belos from killing Luz and instead splatters his body against the skull's wall.

Right afterwards, he honors his end of the deal and ends the Day of Unity by moving the eclipsing moon out of the sun's way. However, the Collector decides that, to play Owl House, he's "gonna need an Owl House" and begins to use his powers to break the skull to pieces. While Luz and company escape to the Human Realm through the Portal, King is pulled back to the Collector to play with him, leaving the Boiling Isles' and its residents, including Eda, fate hanging in the balance.

The Collector first appears in Eda Clawthorne's dream (implied to be set hundreds of years prior to the series' events), where he wears a cloak that has celestial decorations on it; one side black with moons and stars, and the other grey with black suns. His face is obscured by a shadow with a moon symbol on it.

As a shadow, he appears as a two-dimensional being with a half-split design; again with one side black with three sun symbols, and the other grey with three crescent moon symbols. He also has a half-moon face pattern and his head is shaped like a cowl. This form is projected by a dark, circular mirror with a crescent moon symbol upon it.

Upon regaining his physical form, the Collector appears as a yellow-skinned boy with a patch of blue skin on both his left leg and the left side of his face (the latter, which includes freckles, simulating a crescent moon), as well as white hair and eyes with yellow sclera and orange irises. He wears pajama-esque clothing, consisting of a dark nightcap with purple rims and starry dots and a baggy white-and-black onesie with split accents; his right light sleeve is patterned with dark suns, while his left dark sleeve is patterned with blue moons. He also wears dark slippers with white buds, and where a yellow necklace with a white tag of a black smiling crescent moon attached to it.

The Collector is a childish and reckless entity whose personality mirror that of a pre-character development Luz Noceda. Just like Luz at the beginning of the series; the Collector is an impulsive child who was trapped and lonely and just wanted to be free, play games, and make friends, but his idea of fun gets other people hurt and he doesn't acknowledge/recognize this and doesn't feel any guilt for his actions. The Collector is innocent and that's exactly the problem. The Collector appears to have as much malice in his heart when he begins tearing apart the Boiling Isles at the end of Season 2 as Luz did when the snakes she brought snakes and fireworks to school at the beginning of Season 1.

Though the Collector has an underdeveloped and warped sense of morality he is not completely amoral. In contrast to the deceitful and manipulative Empror Belos, The Colelctor is honest and holds pinky swears for instance to be sacred.

The Collector loves speaking in riddles, though he shows irritation when he was unable to come up with a word to rhyme with "unity." 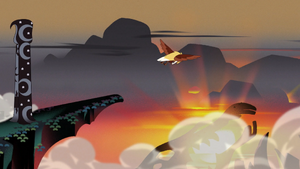 The Collector watching the Owl Beast escape his trap in Eda's dream. 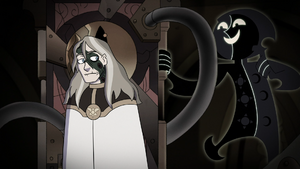 The Collector tries to get Belos to admit he enjoys killing his Golden Guards. 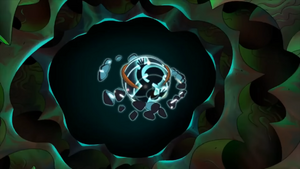 The Collector trapped within the In-Between Realm. 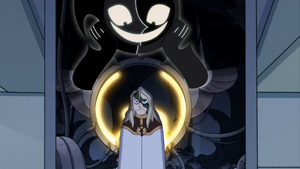 The Collector and Belos prepare for the Day of Unity. 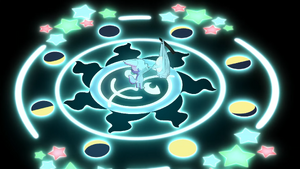 King makes a deal to free the Collector. 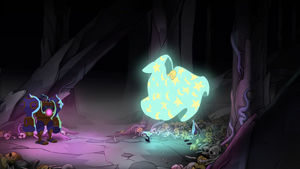 The Collector retakes shape after being freed from his prison. 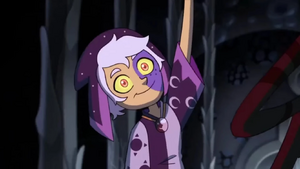 The Collector's debut in physical form.

A projection of the Collector.

The Collector depicting the Day of Unity. 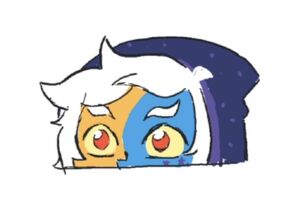 A teaser of the Collector from Dana Terrace's 2022 charity stream. 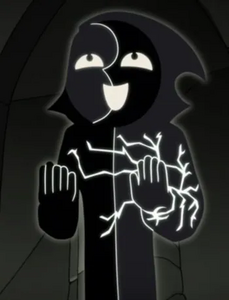 The Collector impersonating a dying witch. 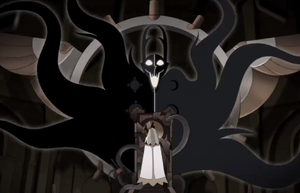 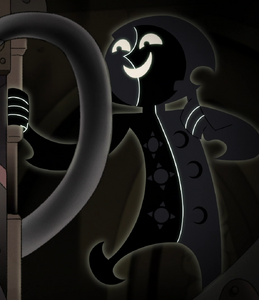 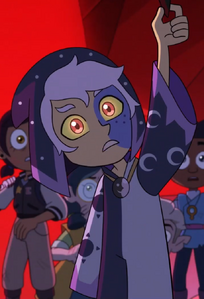 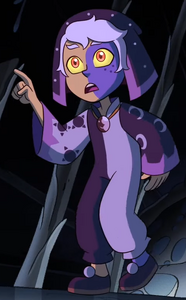 The Collector approaches Luz and her friends after presumably killing Belos. 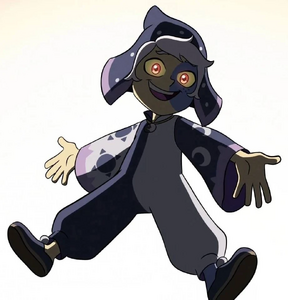 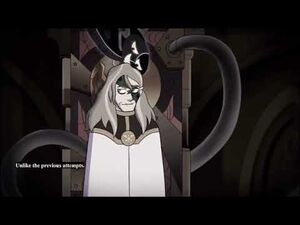