Destroy the Russian Mafia and continue to reign as the most powerful criminal organization in Miami (failed).

The Colombians are a major antagonistic faction in the indie top-down shooter video game Hotline Miami 2: Wrong Number. Shortly after the downfall of the Russian Mafia, the Colombians moved in to steal the rest of the Mafia's territory for themselves and effectively took over the criminal underworld of Miami by 1991. The Colombians are most commonly presented as bald, Latin Americans wearing black suits and pink shirts.

They serve as the main antagonists of the Son's storyline and, by further extension, are the main enemies encountered in "Act 6: Catastrophe".

Following an onslaught of terrorist attacks secretly orchestrated by 50 Blessings, the Russian Mafia is devastated by the masked killings during 1989, especially after their current leader, the Father, is defeated by Jacket. Left unharmed by the masked killings, the Colombian crime syndicate uses this opportunity to seize what is left of the Russian Mafia's territory for themselves while the Mafia is at its most vulnerable. Although other operations are taken over by smaller gangs, it is the Colombians that essentially replace the Russian Mafia as the most powerful criminal organization in Miami following the seizure of their turf.

The Colombians gradually became more powerful over time, becoming involved in the drug trade and establishing a monopoly which would have rivaled the Russian Mafia's businesses while they were still in their prime. Other businesses owned by the Colombians include a bank used as a front for their money laundering scheme to keep the organization's finances safe and shipping cargo at Port Boulevard. Due to the success the Colombians have garnered in Miami, the Son has held a bloodthirsty grudge on them ever since they stole his father's business and is not willing to let them off the hook easily.

Several weeks pass since the beginning of the gang war, and the media has already made several reports on the war, publicly informing the citizens of Miami that the police fear Miami is facing yet another drug war. Despite being larger numbers and more power than the Russian Mafia, the odds have been significantly stacked against the Colombians ever since the drug war had been started, and only worsens once the Son picks the next location to attack: the Colombians' bank.

By December 10th, 1991, the situation becomes even more dire for the Colombians once the Miami police force becomes involved in the gang war. In anticipation for the continuous assaults from the Russian Mafia, the Colombians have fortified one of their cargo ships at Port Boulevard, heavily guarding it with almost a hundred armed Colombian mobsters to defend the operation from whoever might strike. The Miami police department's attention is brought towards the Colombians' activities at Port Boulevard and seek to crack it down.

Unexpectedly, Detective Manny Pardo arrives at Port Boulevard early and instead of waiting for backup, decides to storm the ship by himself. Even against all odds, Pardo makes his way through the ship unscathed and kills countless Colombians guarding it. The mission is ultimately a success for the police once the armed mobsters are all killed by Pardo while the surviving Colombians are apprehended by the police, although Pardo himself is chided by one of his colleagues for his recklessness. This assault was a heavy blow to the Colombians, with not only losing their business resources to the police, but their armed numbers are left heavily crippled and vulnerable against the Russian Mafia.

Unlike the Colombians, the Russian Mafia do not seem to face the same problems with the police and have been avoiding attempts made by Pardo to crack down on their gradually rising business. In between December 10th and December 14th, the Son had also taken two Colombian mobsters captive, killing one of them while sadistically using the other as a make-shift punching bag, keeping him chained up and naked for the Son to throw punches at him. The police assault on Port Boulevard was an unintentional victory for the Russian Mafia, and the Son decides that it is time to take down the Colombians once and for all by invading their headquarters and confronting their leader himself. 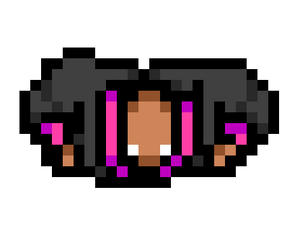 The in-game sprite for the Colombian mobsters. 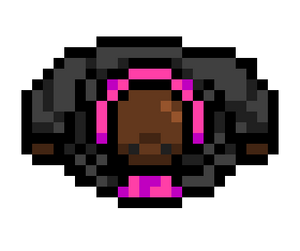 The in-game sprite for the fat Colombians. 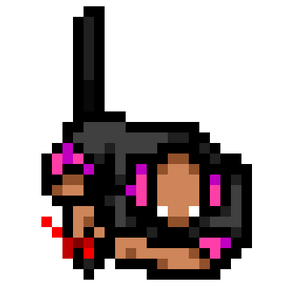 The in-game sprite for the Colombian Dodgers, who wield katanas. 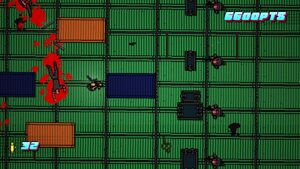 The Colombians defend against Manny Pardo on their cargo ship. 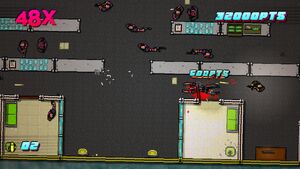 Manny Pardo fights his way through the Colombians. 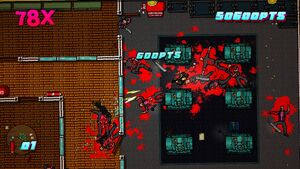 Manny Pardo slaughters the last of the Colombians on the ship. 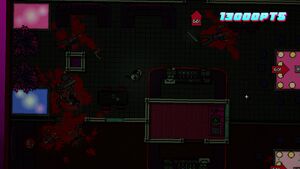 The Son massacres the Colombians at the strip club. 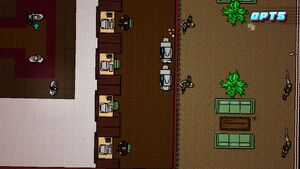 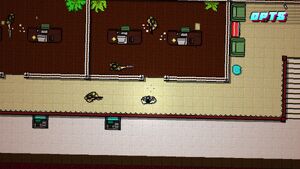 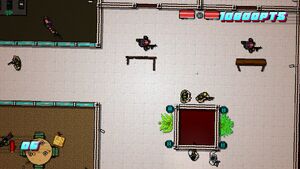 The Colombians take cover during the Son's bank robbery. 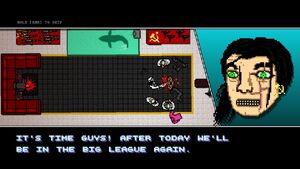 The Son tortures a naked Colombian before his assault on the Colombian mansion. 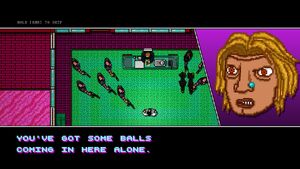 The Colombian Boss is greeted by the Son. 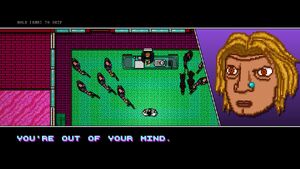 After being demanded to surrender by the Son, the Colombian Boss thinks he is bluffing. 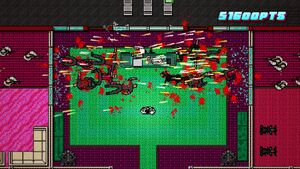