AI member of the Patriots

Keep the members of the Patriots a secret (both failed).

The Colonel is a major antagonist in the video game Metal Gear Solid 2: Sons of Liberty. He is a computer AI that was created by GW, that took the form, as well as the voice of Colonel Roy Campbell, and is a member of the Patriots. He first serves as Raiden's guide during the Big Shell Incident, but then becomes Raiden's enemy after he found out the Colonel's secret.

The AI Colonel was a creation of GW, one of the Patriot's AIs. He was based on both GW itself, as well as Raiden's expectations of the Colonel, due GW being able to access Raiden's nanomachines whenever he used the Codec.

The Colonel was originally served as a guide for Raiden during the Big Shell Incident. Most of the time, The Colonel would give Raiden information about the "terrorists", and give him specific direction on how to complete the mission. But as Raiden's mission progressed further and further, The Colonel began to act rather strangely, as he kept calling Raiden's mission a simulation when Iroquois Pliskin, aka, Solid Snake arrived on the Big Shell to assist Raiden.

Though the Colonel doesn't appear as a playable character in Super Smash Bros Brawl, he does appear as one of Snake's taunts, though only when calling while fighting Luigi (to which he insults Luigi by calling him the King of Second Banana), where he is implied to have replaced Roy Campbell during that instance.

At first the Colonel had roughly the same personality as Roy Campbell's, however was far more gruff and formal than the real Campbell, resembling the archetypal military officer. He was a convincing liar, being able to deceive Raiden and Rosemary into believing that he was a real person, and went along with "looking into" President Johnson's reveals about the Patriots.

After Raiden found out the Colonel was an AI, the Colonel's personality changed, becoming far more explicitlyhostile to him. He firmly believed that the Patriots were the only beings with the qualifications to rule humanity, and took a very dim view on the human species, believing that they squandered free will. 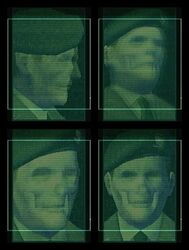