Spirit: Stallion of the Cimarron

Commander of the US 7th Cavalry (presumed)

Breaking horses.
Serving his country the way that he sees fit.

Obliterate or subjugate the Native Americans (both failed).
Break or kill Spirit (formerly).

He was voiced by James Cromwell, who also played Robert Callaghan in Big Hero 6, Dr. Arthur Arden in American Horror Story: Asylum, Captain Dudley Smith in L.A. Confidential, Joseph Campbell in The General's Daughter, William Donahue in Eraser and Warden Hazen in the 2005 remake of The Longest Yard.

The Colonel (who is loosely based on the nonfictional Colonel George Custer because of similar appearance and behavior) is the commander of a cavalry battalion (presumably the 7th cavalry which is what Custer commanded). Like most Americans who expand the west and his real-life counterpart, he is completely prideful and bigoted towards Native Americans and believes that the United States is destined to dominate all of the Western areas of North America. He possesses a calm and calculating attitude and rarely loses his patience. However, he’s a relentless horseback rider and a strict disciplinarian, as shown when he denies Spirit food or water for three days after numerous failed attempts at breaking him. He is also shown to be bellicose in battle, as demonstrated when he ambushed a Lakota village, endangering not just the warriors, but the unarmed women and children.

However, the Colonel also appears to have at least some sense of honor and humility if he realizes he has been beaten, as shown after Spirit and Little Creek got away by jumping the Grand Canyon. Realizing he has lost, he tells his men to stand down and depart, even nodding in recognition.

The Colonel met Spirit after the treacherous gang of wranglers brought him to his army base. The Colonel orders his men to bring him to a blacksmith named Murphy for him to be tamed, only for him to get severely beaten by the wild mustang. The Colonel then takes Spirit to the corral and tries to have his soldiers break him, but all attempts fail miserably. The Colonel then orders his men to tie up Spirit and deprive him of any food or water for three days as punishment for his defiance. During those three days, the Colonel is introduced to a Lakota tribesman named Little Creek, who was caught and arrested by his men for stealing supplies from the base. The Colonel then orders his soldiers to tie up Little Creek to the post and deprive him of any food or water as well. When Spirit's three days were up, the Colonel nearly succeeds in breaking Spirit. As the Colonel proudly boasts about his apparent success, Spirit quickly regains his confidence and manages to throw the Colonel off his back. As the Colonel gets back up, he notices the other cavalry horses cheering for Spirit's victory and tries to shoot the mustang. However, Little Creek manages to free himself and stop the Colonel before escaping with Spirit and the other cavalry horses.

The Colonel and his men got more horses and launched a surprise attack on a Lakota village. Ironically, the village he was attacking was Little Creek's village. Rain (whom Spirit had strong feelings for) came to Little Creek's aid and ran against the Colonel, but she gets mortally wounded by the Colonel and is swept away by a river. The Colonel then tried to kill Little Creek, but Spirit knocked the Colonel off his horse. The Colonel was surprised at Spirit's coincidental reappearance, while Spirit ran to rescue Rain. As Spirit lay by Rain's side, the Colonel's soldiers capture him and take him away to a railway station to have him transported to the construction site of the Northern Pacific Railroad, while leaving Rain to die. However, Spirit destroys the railroad once he realizes that it was going to invade his homeland and escapes the construction site with Little Creek after he came to rescue him in exchange for saving his life.

The Colonel and his Cavalry unit accidentally found Spirit and Little Creek in the Grand Canyon the next day after the destruction of the Northern Pacific Railroad. A dangerous chase is ensued and Spirit and Little Creek manage to knock out a few soldiers before being cornered by the Colonel. However, the pair successfully manage to escape their pursuers as Spirit leaps across the canyon, amazing the Colonel. One of his men raised his rifle to shoot at the pair, but the Colonel stopped him. Both exchanged nods of recognition and the Colonel left quietly with his men. 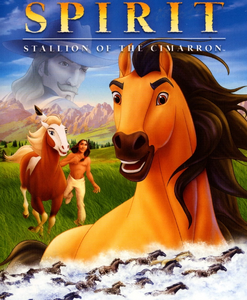 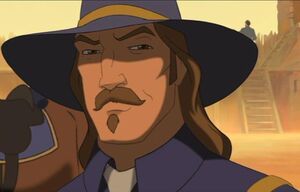 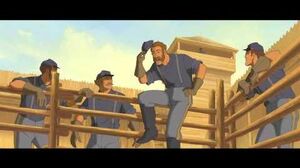 Spirit - Get Off My Back (English Blu-Ray Version) HD 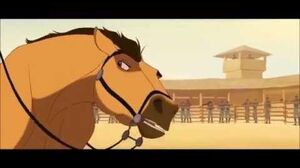 Spirit the stallion of Cimarron - Spirit VS Colonel + Escape 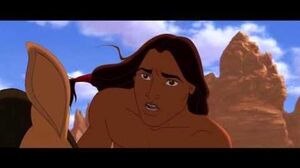 Spirit Stallion of the Cimarron-Canyon Chase and Leap of Faith