Beasts of No Nation

The Commandant is the main antagonist of the 2005 war novel Beasts of No Nation, as well as its 2015 film adaptation of the same name. He is the leader of a Native Defense Force rebel battalion in an unnamed West African country. He recruits Agu, a preadolescent boy and the main protagonist, as a child soldier.

He was portrayed by Idris Elba, who also portrayed Colin Evans in No Good Deed, Russell "Stringer" Bell in The Wire, Krall in Star Trek Beyond, William Roque in The Losers, Shere Khan in the 2016 The Jungle Book film, Macavity in the 2019 Cats film and Brixton Lore in Hobbs & Shaw.

The Commandant leads a rebel army in a civil war in an African country, and recruits children in his battalion; those who fail their training are killed. A recently-orphaned boy, Agu, is forcibly recruited into the battalion, where he meets a mute boy named Strika. When the army stops and robs a gang of innocent people, The Commandant forces Agu to kill an unarmed man with a machete to prove his loyalty, amongst other acts of violence, of which Agu feels strong remorse for.

The Commandant and his battalion commit acts of brutality throughout the land, raiding and destroying villages and massacring and raping their victims. At one night, The Commandant lures Agu into a room, saying that he favors Agu, and proceeds by raping him (he is implied to do this to the other child soldiers as well, such as Strika).

The Commandant was a charismatic and arrogant leader of the NDP army. He convinced Agu to join the army, although he didn't have much choice. The Commandant was very cold, as shown when he forced Agu to kill an innocent man with a machete by exploiting the fact that Agu's entire family was killed by members of ECOMOD, although the innocent men obviously didn't have anything to do with it. He also turned out to be a child molester as he molested Agu along with other children in his army. He was also very uncaring for his soldiers when several of them dies along the way to the war-zones. He even had no problem with threatening children as well, as shown in the final scene when he points a gun towards Agu's head. 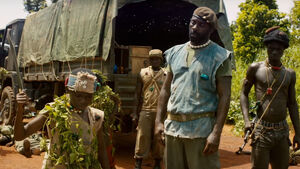 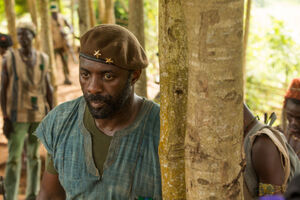 Retrieved from "https://villains.fandom.com/wiki/The_Commandant?oldid=3892220"
Community content is available under CC-BY-SA unless otherwise noted.