Villains Wiki
Register
Don't have an account?
Sign In
Advertisement
in: Mature, Female, Destroyer of Innocence,
and 79 more

Become queen of all trolls.

Destroy all of existence.
Kill lord English/Caliborn for killing most of the troll race.
Get her stolen ring back from Aranea (all succeeded).
Find and kill Dirk Strider (failed).
Kill the entire human race (succeeded before the population was rebuilt).

Her Imperious Condescension is the central antagonist in Andrew Hussie's webcomic Homestuck. She is also the ancestor of Feferi Peixes. She is also known as The Condesce and The Baroness.

The Condesce, despite being portrayed as a heartless tyrant, has a surprisingly laxed personality from what's been shown. She seems comparable to her Pre-Scratch self Meenah Peixes, always using slang and has a terrible attitude. Despite this, she is extremely cruel, exterminating the entire human race simply because they weren't biologically compatible with her own. According the Draconian Dignitary, she actually enjoys baking, implying she really did start Betty Crocker as a genuine baking company.

She takes the appearance of a female troll with very long hair and a black suit. She has pointy horns that go straight up and are very long. She also has a very long trident which is a similar trident to Feferi's. Her trident seems to have some red rope tied around it. This rope might resemble the blood of her victims. Her large black suit has a long Zodiac symbol that is the symbol for the Zodiac known as Pisces. Likewise Feferi Peixes and Meenah Peixes also have a Pisces symbol as their Zodiacs.

The Condesce is mentioned by Doc Scratch Act 5 Act 2, when he tells the reader (and the Handmaid) about the story of the Sufferer (Karkat's ancestor). The Sufferer was a troll who had started a rebellion after remembering fragments of what happened to him in the previous session. She is mentioned to have captured him, and then tortured him to death. Part of this torture involved pressing a hot iron with the Cancer symbol in his chest. She also puts the Psiionic (one of the Sufferer's friends and Sollux's ancestor) in her battleship to be used as a living battery whose lifespan was extended until the Condesce's death.

Later on she appears on Alternia, where she meets the Handmaid, who she challenges to a duel. Eventually she killed the Handmaid in an act that is, according to Scratch, both punishment and reward. The punishment and reward for The Handmaid is her death, which Lord English didn't allow her to do until she finished her task, whilst the reward for the Condesce is immortality from Lord English, with as punishment eternal slavery to him. Further information is witheld from the reader, as Hussie assaults Scratch later on. The story is later told to be "Troll Fanfiction".

In Act 6, Roxy Lalonde tells Dirk Strider that The Condesce is supposed to make them do something that will be a part of her evil plan of destruction.

In Act 6 Act 2 The Condesce is seen ordering DD to get to the decapitated head and figure out who decapitated him.

The Condesce wanted to capture the foe. DD only found a note on the head that said "The prince is here, your sh*t is rekt". Soon Caliborn tells Dirk that The Condesce will try to kill him because he messed with her. The Condesce ship lands on earth and her minions try to kill Dirk.

Meenah Peixes says that she devotes herself to be like The Condesce one day. She wants to become like her because she thinks The Condesce is "cool".

In Act 6 Act 4 Jack Noir accidentally sends The Condesce a pumpkin with a head in it. When The Condesce sees this she sends down a bunch of guards to beat him down. Later The Condesce states that she wants her ring back since someone stole it and gave it to Jack Noir. She also says that she regrets letting the boys do the work.

In Act 6 Act 5 she is wandering around Derse until Roxy falls in front of her.

The Condesce locks Roxy in a jail cell and Roxy finds The Condesces journal which contains lots of glitter as well as dancing clowns. Roxy then falls asleep and in her dream Alternate Calliope tells Roxy to rescue her from Caliborn. While Roxy goes The Condesce invades her dream. Roxy successfully sneaks past her. Alternate Calliope tells Roxy that The Condesce wants to kill Caliborn because Caliborn would soon grow up to become Lord English who would kill most of the troll race. Later while Roxy and Jane were talking The Condesce interrupted them and got angry at Roxy for escaping her jail. The Condesces ship is then seen landing on Derse and The Condesce (who had Sollux's powers at the moment) shot a Psiionic blast from her eyes which she shot at Derses moon so she could destroy it (which was a success). However doing so she accidentally released Roxy and Dirks God Tier. The Condese then flew to Roxy and Dirk and prepared to fight them. Before Dirk could attack The Condesce, The Condesce took over Jade Harley's mind and turned her into Grimbark Jade who would serve The Condesce. The Condesce ordered Grimbark Jade to zap Jane which turned Jane into CrockerTier Jane who also would serve The Condesce. The Condesce ordered them both to beat Jake, Dirk, and Roxy. Grimbark Jade and CrockerTier Jane managed to beat them without a problem and give them to The Condese who put on an evil grin. She then beat them till she got all of their money. She started smoking a cigarette and put on a new pair of glasses with we're white with stripes on it. She then held up their treasures as if it were her own and she achieved it.

Although Act 6 Act 2 was discontinued from Homestuck to become Act 6 Act 5 Act 1, The Condesce made an appearance while it was not discontinued. The Condesce is contacted by Roxy to arrest Jake and Jane after they went into trickster mode. However The Condesce did not care so she ended the contact.

In Act 6 Act 6 Act 4 The Condesce forces Aranea to flip her thumb so that The Condesce can get her ring back. After getting her ring she snaps Aranea's neck and drops her corpse into a pit of fire.

Vriska Serket formed a plan in which the heroes would defeat their biggest threats. One of the biggest threats was The Condesce. John Egbert, Rose Lalonde, Jane Crocker, Kanaya Maryam, and Roxy Lalonde formed a team to take down The Condesce. As the team planned out how they were going to defeat her, she overheard them and was furious. Once the team spotted her, they prepared to have a final battle.

The Condesce fights John, Rose, Roxy, and Kanaya and seems to have the upper hand. She beats all of them down until Roxy comes behind her and stabs her in the back by surprise.

The Condesce appeared in a fan video of Homestuck called "Rex Duodecim Angelus" where the trolls fight the Black King The Condesce makes a appearance along with the other ancestors, like The Sufferer and Marquise Spinneret Mindfang.  She makes another appearance in another fan video called "The Condescension song". This video is a parody of Oogie Boogie song from the movie "The Nightmare Before Christmas". In the video itself The Condesce finally captures Dirk Strider and she teases him by saying things like "He's anime, he's yaoi" or "This can't be the right guy". She constantly pushes Dirk to the wall when he talks back to her.

The Condesce wants nothing more then the destruction of everything. She will do anything to achieve it. Create wars, torture, kill, just about anything in order to make the world topple out of existence. She wants to cause as much chaos and destruction as Lord English. One of her attempts to eternal destruction was to become queen of the trolls. She tries to achieve this by making all the trolls fear her so she can take control over them and make them destroy everything. Although she is the employee of Lord English she hates him with a burning passion and plans on killing him.

As a fuchsia blooded troll the Condesce has an incredibly long lifespan, superhuman strength, speed and durability, and an immunity against telepathic attacks. She is proficient in using a double ended trident (2x3dent), enough so to effortlessly kill a god tier player. She can extend other people's lifespans. Her gold tiara gives her access to several other troll's powers, including control over animals (including nigh omnipotent First Guardians), telekinetic powers strong enough to move planets and the ability to shoot psychic eye lasers that can vaporize an entire moon. 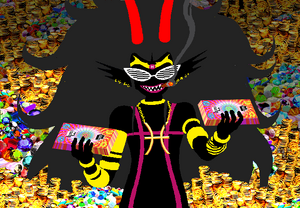