Leader of the Conquistadors

To conquer the city of Cuzco (succeeded).

To conquer Tepulpai village and steal all the treasure (failed).

The Conquistador Chief is the main antagonist of the 2018 French-Luxembourgian-Canadian animated movie Pachamama.

He was voiced by Juan Antin, who happens to be also the director of the movie.

He is first seen assieging Cuzco, the Inca capital, leading his men. However, the protagonists Pulpai and Naira have heard about them before by the chasqui, a messenger for the Inca Empire. The latter described them as "metal monsters" who spits fire and coming on "floating houses".

Their attack causes the Grand Inca to fall on the ground and the rest of the population to hide into the city. Tepulpai notices that the so-called "metal monsters" are just bloodthirsty thieves (in fact Conquistadores). Entering the palace, the Chief and his minions strippes all the occupants from their gold clothes. The Conquistador Chief sees the Huaca, a very sacred item from Tepulpai's village, and wants to take it for himself. Tepulpai asks to leave it but the Conquistador pushes him away with his foot. Then, he shakes the Huaca and hears sound who souds like if gold coins are hidden in the statuette. He disembarks from his horse, takes his sword, and tries to slice the Huaca in half, but it's his sword that breaks instead. The children manages to escape with the Huaca. They manage to hide in an abandoned house, and Tepulpai deceives the plunderers with Kirkincho, an armadillo, while Naira returns to the village with the Huaca.

The Conquistador Chief later meets Naira in her run. Seeing that she holds the Huaca, he orders his men to pursue her. Naira falls into a canyon but she is saved by Tepulpai who rides a condor. The Spanish sees Lamika, Naira's lama, and comes to take her but he is hitten by Kirkincho before he can do anything. Frustrated, he orders his men to shoot the two children and the condor. Fortunately, they manage to escape but the condor is injured, having been touched in the wing. The invaders ride to the protagonists' village.

When they arrive, they quickly steal the inhabitants' treasures. The Conquistador Chief notices that Tepulpai is going into a cave with the Huaca. He follows him and kills the snakes who are guarding the cave by beheading them. Rendered in the cave, he is about to steal the Huaca but an earthquake shatters the artifact in two. It therefore no longer has any value in the eyes of the chief. He turns his attention to Tupalpai to attack him. But at the same time, the statues in the cave begin to come alive. The Conquistador is frightened, believing in a curse, and runs away at full speed. He is not seen afterwards. 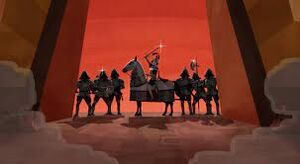 The Conquistador Chief (the one on the horse) and his men at the Inca Palace's gates. 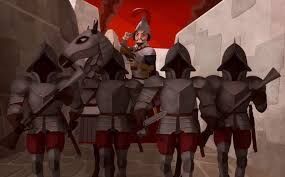 The Conquistador Chief and his men in Cuzco.