Working with the Klaww Gang.

Hypnotize her prisoners into revealing where their stolen loot is so she can steal it for herself (failed).

Use Clockwerk's eyes to hypnotize Carmelita Fox into taking the blame for The Contessa's crimes (failed).

When she was younger, the Contessa once married a wealthy aristocrat who "mysteriously" died of poisoning after the wedding. After gaining her fortune, the widowed Contessa used her psychology and psychiatry skills she learned in school to become Interpol's top interrogator. She would use her hypnosis techniques to reform criminals to a better life, but only after she makes them tell her where they keep their loots so she can have them for herself.

The Contessa first appeared in Episode 2 at Rajan's ball, accompanying Carmelita Fox and Neyla undercover. She later appeared with them at Rajan's spice temple, where she placed Sly, Murray, and Carmelita under arrest (after Neyla betrayed all three of them). Following her to Prague, Bentley bugged her with his sleep darts, which he had discovered would transmit the sound of her voice after making contact, resulting in her unwittingly revealing Sly's location in her prison. Later on, Murray is held hostage by the Contessa who is working on controlling Murray's mind with her hypnosis. He discovered her to be a secret member of the Klaww Gang, hypnotizing criminals to learn the location of their loot. She was also using illegal spice to help with the hypnosis and contributed hypnosis light wave generators to Arpeggio's blimp.

After failing to hypnotize Murray, the Contessa fled from her clinic and escaped to her castle estate, where she held possession of the Clockwerk Eyes and had Carmelita bound to an Iron Tech 250 in her re-education tower, where she tortured her and attempted to brainwash her with the Eyes and make her take the fall for her at Interpol.

Whilst the gang headed there to get the Eyes back, a war broke out between the Contessa and Constable Neyla, in which both had their own respective armies at their disposal. The Contessa's immediate plan, and one Sly and his friends would not allow, was to brainwash Carmelita with a Mind Shuffler into becoming her personal slave, so that she would take the fall at Interpol. However, Sly, Bentley, and Murray stopped her plans and Sly defeated her in combat.

Apparently, the Contessa knew all about Sly's family line, and even taunted him into fighting. Even after losing once and playing the innocent routine, she still declared herself mentally superior to Sly's gang. However, after fighting and defeating her for a second time, it is clear that Sly, Murray, and Bentley are a much tougher match. The Contessa is then arrested and stripped of her title.

She is mentioned by Arpeggio later on in the game when he reveals his master plan to Sly, speaking of her skills in hypnosis aiding the plan to hypnotize Paris. During the credits of Sly 2, it is said that after her incarceration, the Contessa became a highly successful real estate broker, with her clients displaying eerie hypnosis-like symptoms. Nonetheless, it is not known if this is actually true, seeing as how Dimitri was revealed to be a criminal even though he was stated to have become a dance teacher. In the second Sly Cooper comic, she is shown as serving time in Heathrow Prison, with her cell underneath Muggshot's. The time stamps for these events are not given. The slide could be years in the future the jail being the present.

The Contessa is an anthropomorphic spider, possibly a Black Widow spider due to the recurring theme of an hourglass symbol associated with her character. She has the upper body of a human woman where the spider head should be and has claws instead of hands. She wears a red dress and also has a pocket on the back on her abdomen. It was assumed Contessa was Italian in origin, given her name means Countess in Italian. But further research showed she is of Czech origin, given the thickness of her voice and locations in which she chooses to live.

The Contessa is highly intelligent and manipulative, able to trick Interpol into sending her criminals who she then steals from. She is also an accomplished hypnotist, able to hypnotize criminals into revealing where they hid their treasure. She is able to spawn spider eggs that can explode or attack her enemies. Her hypnosis is also increased by the Clockwerk Eyes, although strong minds, like Sly and Carmelita, are able to resist her. She is also skilled enough in fighting to temporarily hold her own against Sly, before being defeated. 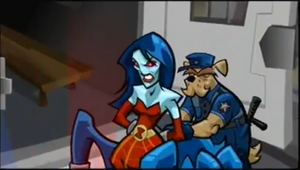 The Contessa's defeat.
Add a photo to this gallery

Retrieved from "https://villains.fandom.com/wiki/The_Contessa?oldid=3780922"
Community content is available under CC-BY-SA unless otherwise noted.