The Crew of the Blackwatch

Find the Treasure of Captain Flynn

One-Shot Pirates
The Crew of the Blackwatch is a group of one-time villains from the Cartoon Network original series, The Powerpuff Girls, only appearing in the episode "Mizzen in Action". They are a crew of 17th century pirates, that went through a time vortex to the 21st century, on an adventure to find the legendary buried treasure of Captain Flynn.

They are lead by crew captain, Captain Crack McCraigen, with Reginald, being the dumb muscle, Mr. Larson being the short guy with the brains, and the Parrot, being the team pet.

In "Mizzen in Action", The Crew of the Blackwatched sailed the seven seas, during a great storm, searching for the legendary buried treasure of another well-known pirate, named Captain Flynn. This happened way back in the 17th century, and just as they did, Mr. Larson spotted a big blue vortex in the middle of the ocean. He warned Captain Crack McCraigen about this, but Captain Crack McCraigen thought that it was unimportant and told them to just sail right through it. Little did they know, this was actually a time vortex, that would send them to the 21st century, once they entered it.

In the 21st century, The Crew of The Blackwatch finally made it to Townsville, still none the wiser of the fact that they were in the future. They followed the map, exactly as it instructed them to do, and they ended up going straight to home of The Powerpuff Girls and Professor Utonium. At the time, all the house's residents were away. The trio broke into the house and completely wrecked the place.

The Crew of the Blackwatch started devouring all of the Chemical X they could get their hands on, giving themselves the powers of the Parrot. As they did, a bunch of Chemical X was junked onto the floor of the ship and the liquid seeped through the floorboards, enhancing not only the pirates, but the ship itself, with the superpowers of Chemical X. Before long, The Crew of The Blackwatch had become a team of superpowered, ghost pirate-esque buckaneers, who sailed their flying, green flaming, ghostly ship, across the skies above Townsville, to find the real treasure of Captain Flynn.

When Professor Utonium got home, he was shocked to see that his house had been ransacked by hoodlums. Just then, The Crew of The Blackwatch arrived and they kidnapped him. They had him tied up in ropes and they pumped him for information on where the treasure was located. It didn't take for for The Professor to figure out that this was The Crew of The Blackwatch. He knew about them from history books. He told them that they led a legacy as a bunch of pirates that mysteriously disappeared, while on a search for the treasure of Captain Flynn. He noted that it was a widely believed myth that the reason for their disappearance, was because they entered a time vortex, that sent them into the future, and he was happy to see that the rumors were true, as this was the future, that they had apparently been sent to.

After asking Professor Utonium once more, if he had any knowledge on where the treasure of Captain Flynn Was, Professor Utonium said that he had no idea, leading Captain Crack McCraigen to make him walk the plank. The Powerpuff Girls showed up on the scene, having heard the distress call from The Mayor, and saved The Professor. The Powerpuff Girls fought with The Crew of the Blackwatch for a while, but because they had the powers of Chemical X, they were too equal for them to take down. 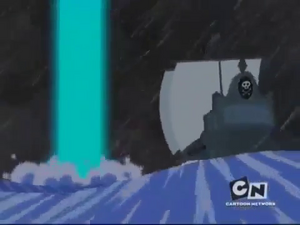 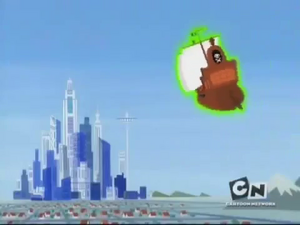 Blackwatch under effect of Chemical X 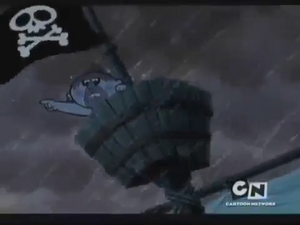 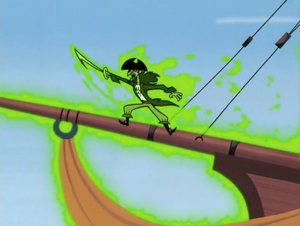 Captain empowered by Chemical X
Add a photo to this gallery
Retrieved from "https://villains.fandom.com/wiki/The_Crew_of_the_Blackwatch?oldid=4078217"
Community content is available under CC-BY-SA unless otherwise noted.