Brute
Crusher is a brutish boxer shown in 1948's Rabbit Punch and as a professional wrestler in 1951's Bunny Hugged (directed by Chuck Jones). He is voiced by the late Billy Bletcher in Rabbit Punch and John T. Smith in Bunny Hugged. Crusher also appeared in a Tiny Toon Adventures episode, featuring two songs by They Might Be Giants: Particle Man (as a wrestler) and Istanbul (Not Constantinople) (as a henchman).

Crusher also had a cameo role in Carrotblanca as a doorman, and appeared in an episode in The Sylvester and Tweety Mysteries. He also appeared in two episodes of Duck Dodgers, voiced by John DiMaggio. Crusher appeared on the web show "fast food" on looneytunes.com.

In 2003's film, Looney Tunes: Back in Action, The Crusher makes a cameo as one of the judges on DJ's stunt performance. 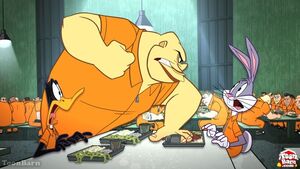 The Crusher in The Looney Tunes Show.