Trying to get God's attention.

Phillip Krahn also known as The Curse, is a recurring antagonist from the Image-based Spawn series.

A religious fanatic and a genius, the man who would become The Curse was obsessed with the upcoming apocalypse and believed that he should lead the armies of Heaven in their war against Hell.

Transforming himself into a monstrous cyborg, The Curse has become a deadly opponent to Spawn, the current Hellspawn.

Phillip Krahn was born to a religious zealot and placed his entire life in his faith. He prepared his entire life for entry into Heaven. When he was a boy he removed his own left eye and scarred his face with a large, deep scratch from a rusty metal fence running horizontally over his right eye. When he was older, he removed his right arm to show his dedication to God.

Doctors felt he was craving attention and any help given to him did not change Phillips devotion to God. After attending college, he grew to become wealthy and studied the occult. He used technology to rebuild his arm, far stronger and better than it was before.

Dawning the mantle of The Curse he used street bums he converted to find Spawn. Upon spotting him in an alley, He sought to gain Spawn's powers, believing him at first to be a soldier of Heaven, but Spawn destroyed his bionic arm and beat him severely, leaving the Curse crucified on a wall in Rat City to teach him and others that the alleys belong to Spawn. He was found and tortured by the demon-hunter, Sankser.

Spawn was too weak from having recently reviving his friend Bobby to fight back. The Curse left Spawn in the alleyways and preached to the bums of God's superiority.

However, Spawn did not die. He retaliated while the Curse was distracted and blew off The Curse's bionic arm. The ensuing fight was fairly quick but an enraged Spawn savagely beat The Curse unconscious.

Then Spawn gives a warning to the Curse by hanging him in the alleys. After several days of torture, The Curse was freed by John Sansker only to be tortured further by Sansker. John wanted to know the horrible things Spawn did. The Curse lied and said that Spawn performed heinous acts to stop the torture John was inflicting.

Later, The Curse escaped from the alleys and returned to his mansion where he began to plot his revenge and recuperate from his many injuries by combining cybernetics with demonic parts.

The Curse appears as a playable character and a boss character in the game. 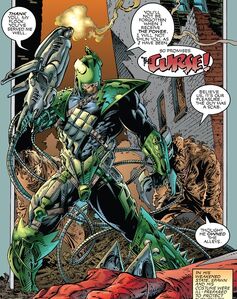 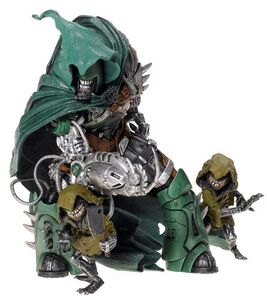 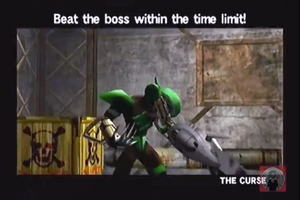 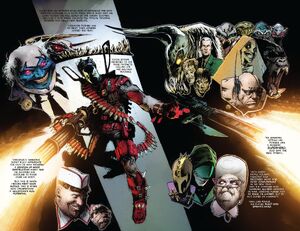 Retrieved from "https://villains.fandom.com/wiki/The_Curse?oldid=3404376"
Community content is available under CC-BY-SA unless otherwise noted.