The Damned is a villainous gang which Lara Croft encounters in Tomb Raider III.

The gang appears to have greenish skin tone, hooded jackets, wearing a pair of jeans. Hidden their faces with masks.

The Damned were once a group of people looking for jobs who signed up to participate in experiments being conducted by Sophia Leigh. The aim of the experiments was to immortalize the subject. However, they failed, and the subjects were presumed dead. As a result, they were dumped into the sub terraneous areas of London. Their faces disfigured and their lives ruined, the Damned attempted to kill themselves. However, it was only here that they discovered the full extent of the experiments, for they were unable to die. So they are forced to exist in the depths of London.

In the Level Aldwych Lara will encounter two types. Both of them have a bat with which they will hit Lara. One of them has a burning bat, after Lara has been hit with it a couple of times, she will catch fire meaning they can be quickly fatal if there is not water around.

The normal weapons are enough to beat The Damned members when they're hostile in the Aldwych level. If the enemy has a burning bat, it's best to avoid getting hit by it. In the following level, Lud's Gate, however, The Damned will become allies, much like the monks from Tomb Raider II. Please note that firing upon one of them changes this instantly. 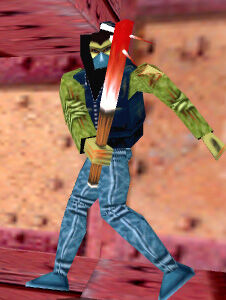 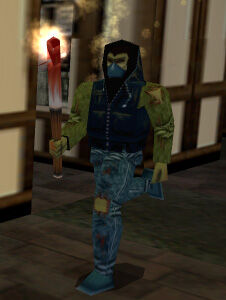 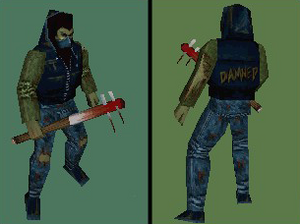 Retrieved from "https://villains.fandom.com/wiki/The_Damned?oldid=4203949"
Community content is available under CC-BY-SA unless otherwise noted.