Personification of darkness and evil

Seeking power through its hosts which are titled the Dark Ones.

To plunge all of the worlds into eternal darkness.

When taking the form of Rumplestiltskin, he is portrayed by Robert Carlyle.

It was created by Nimue. It is an evil force that was battled by Merlin the Sorcerer centuries ago. Unable to destroy it, Merlin bound the powerful evil to the soul of a human, as well as the Dark One's Dagger that would eventually become the chosen Dark One's very cursed weapon, allowing the possessor of the dagger to control the evil human. Upon the Dark One being killed by the dagger, the Darkness would then possess the killer, making them the new Dark One and branding their name onto the dagger. Thus, the Darkness is indirectly responsible for every villainous action taken by Rumplestiltskin and controls every Dark One throughout the entire franchise.

The Darkness is the final antagonist of the second half of Season 4 and the main antagonist of the first half of Season 5, being the force behind Emma, Nimue and Hook's powers. It can be considered the true and most dangerous villain of the entire franchise, given that Merlin, the second most powerful known force of good and righteousness,(second only to the God Zeus) was unable to destroy it, and that it was the power behind every dark action taken by Rumplestiltskin, meaning that it is indirectly responsible for the entire series from the casting of the first Dark Curse to the present.

It can be said that the Dark One, and the Sorcerer Merlin, the only other recipient of the magic and immortality from the Holy Grail, are the most powerful sorcerer's in all the realms and are the ying and yang of light and dark magic. However,thanks to Merlin having much more experience,he is stronger than almost every Dark One,except Nimue,who is apparently the only Dark one and Sorcerer with power matching Merlin's. This is however until the current Dark One, Rumplestiltskin received the power of every Dark One who ever lived, multiplying the Darkness as well as his power, and making him the single most powerful sorcerer in all the realms.

The Darkness was a shapeless form of evil, presumably sentient. In the Season 5 episode "Nimue", it is revealed that the Darkness tethered itself to the soul Nimue, Merlin's lover, and she became its first-ever host after she succumbed to its temptations, crushing the heart of the man who destroyed her home and family, Vortigan. This allows the darkness from within Vortigan's heart to infect her, transforming Nimue into the very first "Dark One". The Promethean Flame is extinguished to an ember, and Nimue goes on to shatter Excalibur into two pieces, in order to prevent Merlin from ending the immortality of both of them. Then, Nimue apologizes to him for her actions, but Merlin says no, that he is the one who is sorry. Merlin was unable to finish it off, and because of its pure wickedness, he was forced to seal its might to the dagger - the broken tip of Excalibur. The human wielding the power would eventually become the Dark One. Nimue, under the Dark One's influence, binds Merlin within a tree after obtaining the dagger.

Eventually, Nimue was destroyed by a new future host, and the Darkness leapt into them, now using their body. After a series of unnamed hosts, Zoso became the Dark One and was later killed off by Rumplestiltskin, who became the most recent Dark One and sparked a series of terrible events in his long reign, including apprenticing the witch Cora Mills and her two daughters Zelena and Regina Mills (Regina later going on to be the first person to cast the Dark Curse). Regina was groomed by Rumple into casting the Curse, all so that he would be taken to the Land Without Magic and re-unite with his son Baelfire, who was already there after he attempted to get his father over to that world so that they could be together and get the Darkness to abandon his body and presumably vanish from the world altogether.

After the First Curse

When Rumple is attacked by Captain Hook and poisoned outside of Storybrooke (the only place in the Land Without Magic where any magic exists), he starts dying, with the Dark One's Dagger showing off that fact as the letters of Rumple's name start vanishing from its surface. Cora states to Regina that, should he die without the Dark One's Dagger being involved, the Darkness would vanish from the world; all that power would cease to exist. It is unknown if this is true, as Rumple is later healed by Snow White, who curses Cora to lose her life force and put it into Rumple, which saved both him and the Darkness.

Before the Second Curse

The Darkness can be seen as a black puddle in the Vault of the Dark One when Baelfire resurrects Rumple. This is presumably a weak and primordial form of it.

Over the series, the Darkness has been darkening the heart of Mr. Gold, also known as Rumplestiltskin, meaning that he will eventually die inside if he loses his last bit of love within, allowing the Darkness to have complete and utter control. In the final episode of Season 4, "Operation Mongoose Part 2", after Henry Mills (now the Author in place of Isaac Heller) undoes the alternate reality created by Isaac, Rumple falls down on the ground in his shop. When he warns of what happens if the last bit of love in his heart disappears, the heroes realize that they have to get rid of the Darkness; if they didn't, then Rumple would die and the Dark One would stay, and no-one would want to have a Dark One around who doesn't have a leash. The Apprentice pulls out Rumple's heart, which is almost completely-black from his centuries of dark deeds coupled with his Dark One title, and uses the Sorcerer's Hat to absorb the Darkness from his heart. After managing to get it out of Rumple's heart, which is now completely-white due to now being pure, the Apprentice puts it back into his body, then puts him under a preservation spell to hold him until his body can adapt to not having the Darkness within it.

Much to everyone's shock, the Apprentice's hesitation to remove the Darkness is justified, as he had previously stated that Rumple's heart has more blackness on it than any before seen; with the Darkness proving too powerful for the Sorcerer's Hat, it escapes, taking the form of several tentacle-like substances that fly through the air. It first attacks the Apprentice, attempting to possess him, but the Savior Emma Swan attacks it with her powerful light magic, driving it out, at which point it escapes out the door and into the town of Storybrooke. As it surrounds everyone, it next attempts to possess Regina Mills, but Emma, using the Dark One's Dagger, summons it to her instead, where it leaps upon her and binds itself to her instead, causing her to disappear out of their world. The dagger drops to the ground, now possessing the name, "Emma Swan".

The Darkness is the Bigger Bad of the first half of Season 5. It takes the form of Rumplestiltskin, telling Emma that he's the manifestation of the Darkness, and the evil side of Rumple. Throughout the first few episodes, Darkness Rumple attempts to persuade Emma to embrace the role of the Dark One, trying to persuade her to crush the heart of Merida, and attempting to get her to steal the dagger back from Regina, whom Emma entrusted it with. Emma realizes, when she can be happy with Hook and focus on him, Rumple vanishes from her mind. When Merlin and Emma go to complete the sword Excalibur by retrieving the ember from the first Dark One (Nimue), Emma calls Nimue forth and the Darkness within her summons Nimue, who tries to persuade Emma to kill Merlin, until Emma snaps in rage and forcefully rips the ember from a stunned Nimue, who dissipates, saying she'll be waiting in Emma's mind. Nimue then manipulates Captain Hook, who became the new Dark One, into being the fourth person to cast the dreaded Dark Curse so that he could return to Storybrooke and finally kill Rumplestiltskin.

The Darkness is not one to be undaunted so easily, however, and returns in Storybrooke (once again as Rumplestiltskin) even after Emma has accepted her role as Dark One, instructing her to build up a hero to retrieve Excalibur - the now-reformed Mr. Gold.

With Gold now a hero, Excalibur is within Emma's grasp. The Darkness within her mind summons not only Rumple and Nimue, but every other Dark One from the past to observe her completion of the ritual. She merges the dagger with the blade using the ember - Excalibur is whole again, and despite Merlin's warnings not to take the sword, after Rumple and Nimue urge her on, Emma grabs it out of the air as the Dark Ones around her smile in triumph.

It is revealed that the Dark One was also influencing Captain Hook, who was shown to be another Dark One at the end of "Birth". The Darkness compels him to get revenge on Rumple, but Hook loses the ensuing duel. Nevertheless, he has the blood needed to let Nimue, the original host of the Darkness, to cross over, along with all other Dark Ones.

The Darkness is the ultimate antagonist and omnipresent force of evil in the Winter Finale, "Swan Song". Its power grows as all the Dark Ones, Nimue included, descend upon the town and begin their takeover. The heroes fight against the Darkness in a bid to save the town, and Hook desires to make Rumplestiltskin pay. The Darkness appears to be winning as Nimue begins to defeat Emma, but in the end, Hook decides to destroy Nimue and the others and sacrifice his own life to seal the Darkness away with him and all other Dark Ones. Instead, Gold performs a swap, believing his loved one Belle has given up on him, and becomes the Dark One once again, meaning that, in the end, the Darkness got away with every evil action it performed and was never destroyed like the previous Dark One souls were.

The Darkness appears one final time to Gold (as himself, humorously) in the Season 6 finale, "The Final Battle". He reminds Gold that even though he destroyed his mother, the Black Fairy, to save the realms, her last command to Gideon cannot be undone and says that he will always love having the Darkness. Gold disagrees and vows to become a better man for the Savior and his own family before commanding Gideon to stop using his heart. Fiona's spell on him proves too powerful, and the Darkness walks away through the tunnels laughing and confident in the belief that Gold has only further strengthened his son's destiny. However, the entity's taunts on its host prove meaningless as Gideon is brought back as child after stabbing Emma and Emma herself returns to life after True Love's Kiss form Henry.

Gold finally decides to accept that light and darkness will always have a place in him and joins the rest of the cast at the dinner table at Granny's. 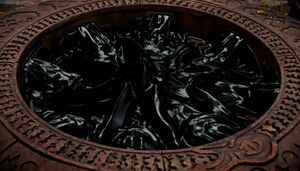 The Darkness in it's slimy form. 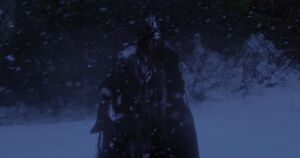 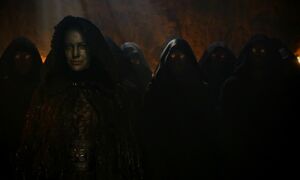 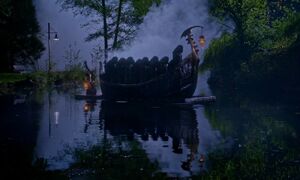 The Dark Ones has returned. 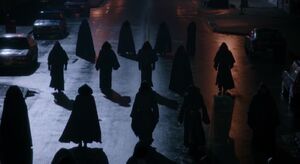 The invading Dark Ones took over the town of Storybrooke.
Add a photo to this gallery

Retrieved from "https://villains.fandom.com/wiki/The_Darkness_(Once_Upon_a_Time)?oldid=2589516"
Community content is available under CC-BY-SA unless otherwise noted.