To return the universe to an original state of darkness.

To seek revenge against her brother God.
Be "bound" to Dean Winchester.

The Darkness, also called "Amara", is a villain appearing on the CW television series Supernatural, first debuting in the Season 10 finale "Brother's Keeper" and serving as the main antagonist of Season 11 and arguably the Bigger Bad of Seasons 9, 10.

When incarnated in human form, it is played by Emily Swallow (as a grown woman), Gracyn Shinyei (as a prepubescent girl), Yasmeene Ball (as a pre-teen), and Samantha Isler (as a teenager).

The Darkness is God's older sister, an ancient, primordial force that existed before God Himself came into being. Sometime in the far past, God, along with His Archangels, battled His sister before locking her away using what would later become the Mark of Cain, which He then entrusted to Lucifer. However, Lucifer became corrupted by the mark as the Darkness began to assert her malign influence upon him, leading the Archangel to rebel against God's command to bow down to humans. After Lucifer was banished from Heaven, he later transferred the mark to Cain who, many centuries later, passed it to Dean Winchester.

The Darkness could only remain imprisoned if the Mark of Cain was passed to another person. Thus, the removal of the Mark of Cain from Dean, caused by a spell cast by Rowena at Sam Winchester's behest, had the unfortunate consequence of unleashing the Darkness upon Earth at the end of season 10. Once freed, the Darkness grew to gigantic size and descended upon the Winchester brothers as they tried to flee in the Impala.

In the Season 11 premiere "Out of the Darkness, Into the Fire," Dean remembers encountering the Darkness in the form of a human woman. The Darkness tells Dean that they are bound to one another and will help one another, revealing she has the Mark of Cain, before Dean regains consciousness in a field, separated from Sam for a brief time.

Later, while driving, Dean and Sam come across a couple of men with black veins, and they find Deputy Jenna Nickerson, who's injured. They take Jenna to the hospital, where they meet Mike Schneider, a man who's contracted the Darkness from one of the infectees. Mike asks the Winchesters and Jenna to take his newborn daughter; after he succumbs to the disease, he confronts Dean and Jenna and asks for his daughter back. As he dies, Mike says the baby's name is "Amara." In the final scene, while Jenna is changing Amara's diapers, she notices the Mark of Cain on the infant.

Dean drops Jenna and Amara off at Jenna's grandmother's house. A few hours later, Amara displays telekinesis, which she uses to throw letter blocks onto the wall to spell out the words "Feed me." While her grandmother, believing Amara to be possessed by the Devil, calls a priest, Jenna calls Dean, who speeds back to the house. After Dean arrives, he's stunned to see that the priest that Jenna's grandmother called is Crowley. Dean and Crowley step outside for a tense discussion, and Crowley tells Dean that he senses something dark and ancient in Amara.

While Dean and Crowley are talking, Jenna goes to check on Amara, who proceeds to consume her soul. Moments later, after Jenna kills her grandmother before being killed by Crowley after she attacks Dean, Amara suddenly ages into prepubescence and flees while Dean and Crowley are fighting. By the episode's end, Amara is found by Crowley, who offers her a family to consume; she accepts his offer with a smile.

Crowley takes Amara in, assigning to her a demon nanny and educating her about everything that's happened since her imprisonment long ago. Amara accepts Crowley's hospitality, even regarding him as an uncle despite being much older than he is, and asks him about the universe that God created. She also shows a fear of God. Unknown to Crowley, however, Amara conspires with an adult reflection of herself in a mirror. She also feeds on a surplus of human souls provided by Crowley, but her hunger increases to the point where she consumes the souls of both her demon nannies and ages into a pre-teen. When a concerned Crowley tries to tell her to stop consuming souls, Amara becomes angry and demands to be fed.

Amara sneaks out of Crowley's base and explores the outside world, eventually arriving in Fall River, Massachusetts, where she encounters Len, a fan of Lizzie Borden, and consumes his soul. She then goes on a soul-sucking spree, resulting in a handful of ax murders that draw the attention of the Winchesters. After the actual perpetrator is killed by Len and the Winchesters leave town to track down Amara, Amara herself, unseen, watches the brothers, smiles, and thanks Dean.

In "Our Little World," Amara, now a teenager, is confronted by Crowley about sneaking out and consuming souls, and she grudgingly agrees to go on a diet of sorts and be patient. Later, Dean arrives to kill Amara, only for Crowley to telekinetically pin him to a pillar. When Crowley then prepares to kill Dean, Amara intervenes, pinning the King of Hell to the wall and torturing him into granting safe passage for Dean. She then ends her alliance with Crowley, who assents to her terms and leaves.

Amara then releases Dean and stands before him with the demon-killing knife in her hand. Dean finds himself unable to attack Amara, who goes on to explain that she's on Earth to settle "the oldest score" of all time. As this is happening, Castiel confronts and interrogates Metatron, who reveals that Amara is actually God's older sister, whom He had to lock away in order to create the universe. Dean and Sam try to attack Amara, who flings them away before departing and vanishing. In the final scene, Amara is seen walking among humans, admiring them.

Amara is now a growing woman. As searching for her brother God, she discovers protesters of a religious sect, who said that only the ones who will repent of their sins will be allowed to enter Heaven a tthe end of days. Amara, tired to hear peoples said fake about God, decides to reveal herself to everyone around, before killing them with lightnings. She go in a church, thinking that a priest could help her find his brother. The priest tells her that she just had to pray, she trie, but angry that it does not work and that peoples still thinking that God is good, Amara kill everyone in the church after eat their souls. Soon after, the Winchesters investigating on the carnage, Amara find Dean and talk with him after teleporting him and herself in a countryside. She explains to Dean that she is not the evil, that everyone think she is. Dean answer by saying she is trying to became the "new God", and then trying to stab her with a knife, but the knife broke himself in smithereens. Unfazed by the attack, Amara advise that he know it will be pointless. She then kiss Dean, saying that she knows he tried to resist but that she can be resisted. Three angels appears, asking her to submit, or alls angels in Heaven will uses their celestial blasts a the same time on her. She refused and kill the three angels by differents ways. As the angels are about to smite her from Heaven, she teleports Deans aways and prepared to face the powerful celestial blast.

In "Hell's Angel", Amara fully recovers from the celestial blast thanks to the powerful witch Rowena, who offers her help and to become her ally. She later tracks down Rowena to a place where the Winchesters are confronting Lucifer and trying to exorcise him from Castiel. Lucifer then attacks and tries to kill Amara with the but fails. She then telekinetically grabs her nephew and tell him that they need to talk and they teleport away. Lucifer then tries to make a alliance with his aunt saying that they both have a common enemy, God, which she agrees saying that he could be useful. Amara then tortures the archangel in order to draw God out. 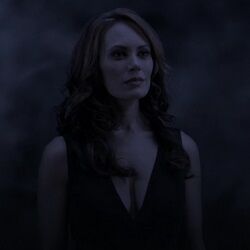 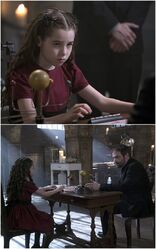 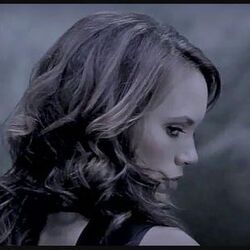 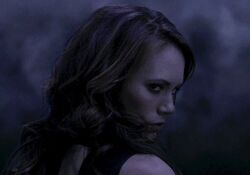 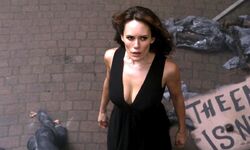 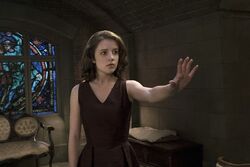 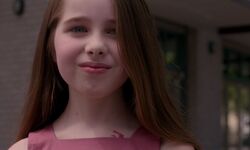 The Mark of Cain on the chest of Amara (The Darkness) in her infant human form.
Add a photo to this gallery

◾The Darkness also shares a lot of similarities with the Great Darkness from Hellblazer/Constantine, which was a major inspiration for TV writer/producer Eric Kripke and Supernatural. They are named similarly and both existed before God created light and was released as a form of an engulfing blanket of thick smoke.