Villains Wiki
Register
Don't have an account?
Sign In
Advertisement
in: Article stubs, Metroid Villains, Evil Vs. Evil,
and 11 more

The Deleter is a supporting antagonist in Metroid: Other M. His role is to to kill any witness and destroy everything that links the Bottle Ship (the area where the game takes place) to the Galactic Federation.

He is first seen when he shoots another marine known as Maurice Favreau to death with a Freeze Gun.

Moments later, he fights the game's protagonist Samus Aran in the vehicle known as the RB176 Ferrocrusher, but Samus wins the fight though.

He escapes and kills K.G. Misawa by freezing his body and tosses it into a pool of molten lava.

Much later he attempts to murder the mysterious MB (who goes under the name Madeline Bergman at that time), only to end up dead himself, either at the hands of MB or a Desbrachian. His body is later found by Samus. 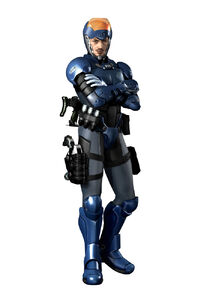 James Pierce, the most likely identity of the Deleter.