Adultfulize The Kids Next Door (failed).

Although the Delightful Children are in service of Father, they are seen acting independently from him just as often as not. The Delightful Children rarely partake in direct physical combat, usually sending other villains to do their work and controlling large combat machines. They make more appearances in the series than any other villains, and more than any character other than the five members of Sector V.

It is revealed in Operation: Z.E.R.O. that the Delightful Children are none other than the operatives of the legendary "lost sector" of the KND, Sector Z. They were captured by Father and placed in his first prototype Delightfulization Chamber, which had much stronger effects than intended and completely destroyed the children's individual identities, creating the hive mind that is the DCFDTL and destroying the unstable machine.

Shortly after this is revealed, the Delightful Children are re-commissioned by Re-commissioning Module, restoring them to their former selves as KND operatives. However, the effects of delightfulization were so powerful that any reversion is temporary, and the re-commissioning module's effects wear off during the final battle on the moon base. Sector Z's final words to Numbuh 1 as the delightfulization takes hold again are "Tell The Kids Next Door That we miss them!".

The Delightful Children celebrate their birthday five times a year, as they are technically five people. Each time, they prepare a delicious cake which they intend to eat it without sharing with any other kids and force their "guests" to watch as they do so. Sector V personally attempts to stop them from eating their cake at all costs whenever they celebrate their birthday, which occurs six times throughout the series and composes a recurring storyline, throughout which this simplistic scenario is repeated with several variations and exaggerated to absurd lengths.

In "Operation: C.A.K.E.D.F.I.V.E'.", Father creates a moon-sized ice cream cake for his children and attempts to remove all other ice cream, planning to have all the children in the world watch as they eat the last ice cream in existence. In each of these episodes, the cake is stolen, destroyed or in some way rendered inedible for the Delightful Children, save for "Operation: S.I.X.", where Numbuh 2 is tricked into personally delivering their cake to them. This leads to Numbuh 362 giving the mission to Sector W in "Operation: I.N.T.E.R.V.I.E.W.S.".

In "Operation: F.O.U.N.T.A.I.N.", it was revealed that the Delightful Children were responsible for making Numbuh 1 bald, which was done in such a way that his hair would never grow back. This occurred shortly before he joined the KND, and is never shown and only briefly mentioned, leaving the circumstances of the incident up to the imagination of the viewer.

Their first appearance was in Operation: C.A.K.E.D., the very first episode of the series after No P in the Ool and the first installment in the aforementioned "C.A.K.E.D." series. Their connection to Father was first revealed in Operation: G.R.O.W.-U.P., also the latter's first appearance, in which he gives them use of the "Really Really Incredibly Destructive Machine" and the Age-Changing Cigar from Operation: C.A.B.L.E.T.V.. Using these items, the Delightful Children successfully destroy Sector V's treehouse and turn Numbuh 1 into an adult.

The DCFDTL are obsessed with behaving properly and wish to become adults as soon as possible. In Operation: E.L.E.C.T.I.O.N.S.', they make a deal with Chad to let the students of his middle school enslave the students of Gallagher Elementary in exchange for being "promoted" to middle school level, thereby becoming "that much closer to glorious adulthood." In Operation: F.O.U.N.T.A.I.N., they attempt to destroy the Fountain of Youth in order to prevent anyone from remaining a kid.

When startled, the Delightful Children become disoriented and briefly cease their synchronization with each other. In "Operation: U.N.D.E.R.C.O.V.E.R.", Lenny, the boy with the helmet, is apparently revealed to be an undercover KND operative and leaves the DCFDTL to assist the team during their attack on the coffee rig, during which time he functions independently and acts like a normal kid.

However, this is revealed to be a ruse, as Lenny was only pretending to be an undercover KND operative so he can get his hands on the KND's top secret files and he returns to the Delightful Children towards the end of the episode. Even after this is revealed, Lenny alone is responsible for the error that causes the Delightful Children's defeat, as Numbuh 274 and Sector V (except Numbuh 4) knew Lenny was tricking them from the start and he would betray them sooner or later, so they turned the tables by pretending to trust Lenny and give him fake files. He and the other Delightful Children discover the files is actually a bomb, much to Lenny's dismay as the others call him an idiot.

In "Operation: I.T.", the Delightful Children betray Father in order to stop his plan to spread broccoli throughout the world to force feed to children, which even they are against, because they are still children, and even they hate broccoli.

The last we see of the Delightful Children is in "Operation: I.N.T.E.R.V.I.E.W.S.", in which they are on a scavenger hunt to retrieve their cake. When Numbuh 1 returns to the amusement park with Father's pipe, the children begin to battle him for it, and end up on a log-river ride. The Delightful Children get him into a hold and are about to end him once and for all, when Nigel grabs onto a sign while they fall into a broken part of the ride and into a deep hole below, presumably to their deaths. 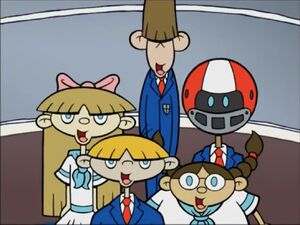 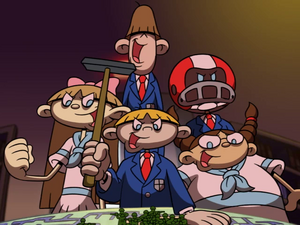 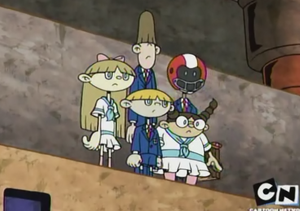 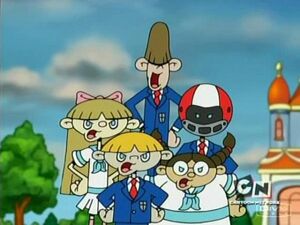 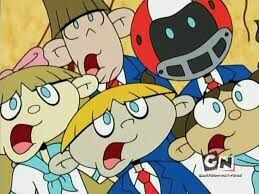 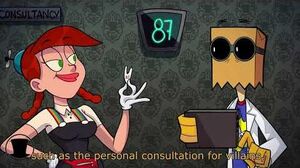 Retrieved from "https://villains.fandom.com/wiki/The_Delightful_Children_From_Down_The_Lane?oldid=3335225"
Community content is available under CC-BY-SA unless otherwise noted.