Head of The Eliminators

Kill The Darkness.
Eliminate all organic life.
Rule the universe.

He was voiced by Gary Anthony Sturgis, who also voiced the Phantom Virus in Scooby-Doo and the Cyber Chase, Ebon in Static Shock and Trogaar in Teen Titans.

The Destructinator seems to be far more intelligent and manipulative, compared to the other Eliminators. He also acts out against the Darkness when he becomes fed up with his master's reluctance to destroy Timmy Turner, eventually growing more powerful and becoming the true threat.

The Destructinator looks exactly like the other Eliminators but has red eyes instead of the regular green, save for a unique pair of sunglasses and a black leather jacket which he wears. After rebelling against the Darkness, he is destroyed, but manages to rebuild himself. With the ability to absorb any magic and weapons used against him, the Destructinator becomes even more powerful when Jorgen Von Strangle attacks him with his wand, turning into a more sinister looking robot form.

He was a parody of the original Terminator from the Terminator series.

The Destructinator is the first Eliminator to come after Timmy after he shouted his own name when his classmates didn't know him. He chased Timmy Turner and Jorgen Von Strangle through Dimmsdale. When they disappear into Fairy World, he crashes into the mall and takes a black leather jacket and sunglasses, a direct reference to the original Terminator, making him the most distinguishable Eliminator and de facto leader. He seems more intelligent than his comrades, as well as more vicious. He tries repeatedly throughout Wishology to kill Timmy. He and two other Elminator's in pink shirts chased Timmy across the country to the Middle-Aged Rock Festival. KISS destroyed his two fellow Eliminators but he destroyed their weapons with his own.

After Poof took his weapon (Timmy convinced him it was a teething ring), KISS used their fire breath to melt him, only for him to regenerate with an entire army of Eliminators. Just as he and his army cornered Timmy, the fairies (who were bubble gum at the time) arrived and struck them, sticking them down. When Timmy shot the White Wand into The Darkness, it recalled him and the Eliminators, and then they retreated back into space.

In Part 2, he led an attack on Mark Chang's planet Yugopotamia to steal their fake-i-fiers to trick Timmy. He then leads an invasion on Fairy World, capturing Cosmo, Wanda, Poof, and Jorgen. Fortunately, Timmy and Mark Chang manage to escape back to Timmy's house, where he attacks Timmy with a gang of Eliminators disguised as his friends and family (after the originals had been captured). However, when his gang formed a giant black hole to suck Timmy in, Timmy and Mark threw a boom box, roller skates, and a giant tub of weenies into the hole, causing it to overload and explode.

However, after Timmy and Mark leave, he and his comrades rebuild themselves and discover they absorbed the items Timmy used against them. They ambush him and his group once more on the way to the Blue Moon of Vegan, where he absorbs Denzel Crocker's "Fairy Freezer" and Dark Laser's Lightstick, using the former to capture Crocker, Vicky, and Dark Laser. Timmy tries to explain that Turbo Thunder is the real chosen one and be nice, somehow causing the Eliminators to shut down. He and an army of Eliminators confront Timmy on the Blue Moon of Vegan, where he says that they cannot be stopped. However, before he can throw Timmy to the Darkness, his friends, family, and enemies arrive and drive him and the army off with their wands. However, the Darkness begins to draw all of them into its swirling vortex, so Timmy sacrifices himself to save his friends and family.

In Part 3, he plays his largest role. While Timmy is trapped in the Darkness, he poses as Trixie Tang to keep Timmy happy so he doesn't realize what is really happening. After Timmy escapes, he wants to go destroy him, but the Darkness wants Timmy trapped inside him again. Tired of the Darkness playing around with Timmy, he betrays the Darkness and attacks it, only to be easily blasted apart by the giant creature. However, he crash lands on Earth and rebuilds himself, then sets about his revenge on both Timmy and The Darkness. He attacks Timmy and his group in the Timmy Cave. Jorgen attempts to drive him off with his wand, but Timmy's warning about the Destructinator's ability to assimilate weapons comes to late.

Using his new magical powers, he sends Jorgen flying and banishes Timmy's friends, family, and enemies into the Darkness before setting his sights on Timmy. Timmy and his fairies escape but he uses his new powers to track them down, causing mass destruction to the town as he does so. Cosmo tries to destroy him by turning into a giant, Godzilla-like monster but makes the mistake of getting rid of his and Wanda's wands. M.E.R.F. tries to destroy him with a great deal of firepower, despite Timmy's warnings he'd just absorb them. He does just that and grows to giant size. It is at this point he dubs himself the Destructinator, the main antagonist of the Wishology trilogy. When Timmy and his fairies escape the Earth, he uses his magical power to transform it into a giant metal planet and all of its inhabitants into robots. He then has the Earth filled a ton of explosives. Using Timmy as bait, he plans to get the Darkness to take Timmy and the Earth into its heart, where he will then detonate the explosives, destroying both Timmy and the Darkness. When a newly superpowered Timmy returns to Earth, he captures him. 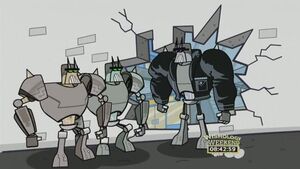 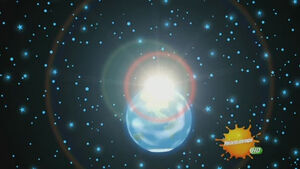