Creating and guiding the Anti-Christ.

Take over Briarcliff and the church.

Keep God far away as possible from himself.
Maintain control over Hell (all succeeded).

The Devil, also known as Satan, is the main antagonist of American Horror Story franchise.

Initially introduced as a powerful entity wrecking havoc in Briarcliff Manor, as well as the unseen influence in Hotel Cortez, it is revealed to be Satan itself (or even possibly a segment to Satan itself).

In both seasons of American Horror Story: Murder House and American Horror Story: Apocalypse, the Devil was revealed to be the true mastermind behind the birth of Michael Langdon, the Anti-Christ born from the rape of Vivien Harmon by Tate Langdon, due to Satan brainwashing and influencing Tate's malicious actions and even took possession of his corporal spiritual form to rape and impregnate Vivien with Michael.

Mary Eunice was portrayed by Lily Rabe in both the second season and the fourth season (pre-possessed), who also voiced Honerva aka. Haggar from Voltron: Legendary Defender. Jed Potter was portrayed by Devon Graye.

At least while at Briarcliff, the Devil lacked a true form, and only existed in a host. While its behavior while in control of Jed Potter was monstrous and uninhibited, it initially stayed very low key under the guise of Sister Mary Eunice, subtly manipulating and mentally torturing Briarcliff's inhabitants (especially Sister Jude with her dark past, and Dr. Arden with his previous life as a Nazi scientist). However, as time went on, the Demon revealed itself to Jude (who it had previously encountered during Jed's exorcism) and Dr. Arden (who desperately followed the Demon in hope of seeing at least a glimmer of Mary Eunice, whose innocence he cherished). After Jude was removed as head of Briarcliff and incarcerated within, Mary Eunice grew closer to Monsignor Timothy Howard, promising to help elevate him through the ranks and make him Pope. The Demon's master plan was thus set in motion: a take over of the Catholic Church. It had the power to possess people, make their eyes glow demonically, as well as reading the minds of people and telekinetically moving objects. The demon often enjoyed reading a person's mind to see their secrets, such as Sister Jude's alcoholic past and the "murder" she committed to its own amusement. The demon thrived solely through possession and if its host died, it died along with him, making the host both its strength and its ultimate weakness.

Jed Potter is a seventeen-year-old boy admitted to Briarcliff Manor by his parents after he is found in the family barn having disemboweled their best cow and muttering an unknown language while under the possession of a demonic entity. It is unknown how Jed was possessed by a demon in the first place. After his death, Sister Mary Eunice was then under its control. During his brief time in the sanatorium, the Devil mocks Sister Jude and Dr. Oliver Thredson. He mocks Sister Jude about killing Missy Stone by accident.

After initially getting into Briarcliff through Jed, the Devil took over young, innocent Sister Mary Eunice, and slowly used malice and manipulation to get Jude fired from Briarcliff. Acting as Eunice, it replaced Jude as head of the establishment, becoming superior over Dr. Arden. "Mary Eunice" slowly began to get Monsignor Timothy's approval of "her" changes to Briarcliff's conduct and daily life for the inmates. This included a Christmas party, and a showing of "Rudolph the Red Nosed Reindeer", things Jude had previously described as acts of turning "away from God". Still, despite the public face as sweet, innovative Mary Eunice, the Demon was committing dark, far less subtle crimes in the shadows, such as killing the Briarcliff security guard Frank, setting serial killer Leigh Emerson loose on Jude, and killing a man Jude was using to get information on Arden (the Demon used this murder to reveal himself to Jude).

At one point, the Devil confronted Shachath, the Angel of Death, demanding she leave Briarcliff after the Angel was "called" by a dying inmate. Shacath retorted that she had been invited, unlike the Demon, whom she referred to as a cousin - "like [Shacath], but fallen". The Angel also noted that she could hear Mary Eunice trying to fight against the Demon, and momentarily, Mary Eunice took control of her own body again, sobbing and pleading to Shachath to free her. The Demon quickly resumed control; before leaving, Shachath warned it they would meet again.

Later, the Demon confronted Timothy and repeated its promise to manipulate events until Timothy was made Pope, so that the Church would finally be under Satanic control. Defying this, Mrs. Howard attempted to appeal to any vestiges of Mary Eunice's true self and her inner virtue. This infuriated the Demon, who attacked the Monsignor and promised to devour the "last morsel of [Mary Eunice's] soul". Briefly, Mary Eunice regained control of her body once more, tearfully telling the Monsignor she was tired of fighting against the Demon, and that she wanted to go (die).

Taking pity upon the tearful nun and seizing advantage of her weakened state, the Monsignor quickly cast Mary Eunice over a nearby staircase railing. They exchanged one last gaze as the young nun fell, before she hit the floor far below. Shacath then appeared, kneeling down before the fatally injured Eunice, who again asked the Angel to take her. "I'll take both of you", Shachath replied, and kissed her.

It is implied that the Demon was destroyed or sent back to hell by Shacath, while Sister Mary Eunice's soul was saved and ascended to Heaven, freeing her from the demonic control once and for all. However, the Devil's influence still exist in Braircliff, so strong that pushed Timothy towards his desire of power, leaving him to abandon both Sister Jude and Briarcliff to their destruction.

The Devil itself is confirmed to be the dark force that drove Tate Langdon into raping Vivien Harmond as the Rubber Man, whilst conceiving Michael Langdon, the Anti-Christ, as well as being responsible for all of Tate's other atrocities, by influencing and controlling actions, and even taking full possession of Tate (in spite of Tate being a corporal ghost).

Although not appeared or mentioned in American Horror Story: Hotel, the Devil is implied to be the one behind the supernatural dark power of Hotel Cortez, corrupting the guests and making them commit vile actions, as well as the creation of the Addiction Demon, who worked for James Patrick March.

This was suggested in "Could It Be... Satan?", where it is revealed that the Hotel Cortez is a "hellmouth", or gateway into Hell itself, thus implying that the Addiction Demon may have originally hailed from somewhere in the depths of the underworld and appeared to Sally McKenna as her personal tormenter.

There're also Satanists who appeared in American Horror Story: Apocalypse that believed Michael was their Dark Messiah and plotted the Apocalypse with him, eventually starting the organizing of the Cooperative and the world's destruction.

After the death of Michael at the hand of Mallory, the Satanists who involved in the conspiracy didn't get punished due to the renewal of the timeline. They began to search for a new Anti-Christ in this renewed timeline, where they eventually found Devan Campbell, the son of Timothy Campbell and Emily, presumably caused by their special genes that made them targeted by the Cooperative (in the old timeline) at the very first place, suggesting at least one of them were somehow related to the Devil to some degree. 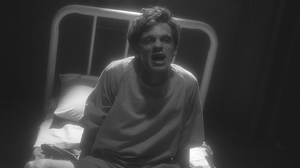 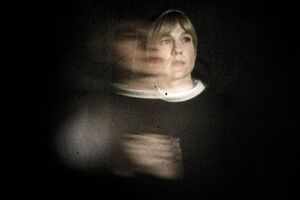 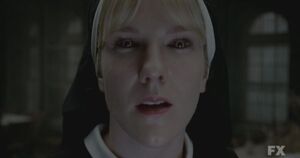 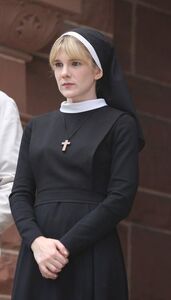 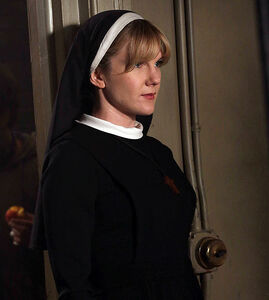 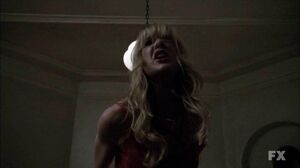 Sister Mary Eunice's Performance of You Don't Own Me