Taking random jobs and then quitting them

The Devil, also known by many names such as. Satan, Lucifer, Beelzebub, the Prince of Darkness, actually, Princess of Darkness (in her current form and gender), is the former main antagonist of the 2000 supernatural comedy remake film Bedazzled.

She was portrayed by Elizabeth Hurley, who also portrayed Vanessa Kensington in the Austin Powers films and will later portray Morgan le Fay in Marvel's Runaways.

She would answer the call of a geeky San Francisco native, Elliot Richards when he wants to be with the woman of his dreams, Alison Gardner who is a co-worker of his. She appeared to him in a sports bar and offered him anything and everything his heart's desired. After he asked her how can she achieve all of this, she whispered into his ear that she is The Devil. She told him to test her powers. He wished for a big mac and coke. A city bus appears and they drive to the nearest McDonald's. They made the order and she made him pay for it and little did he know that it was setting the tone for what his wishes will be like.

Shortly after, they drive via her BMW car with a licence plate titled "Bad 1" (an allusion to her another alias "The Evil One") to a club called DV8 (which could be short for the word "Deviate") where to his surprise, he was the guest of honor. They would go to her office and she would finally prove to him that she was The Devil by appearing as a red-skinned humanoid with horns, cape, tail, goatee, and a Satanic trident. She then gave him a large book which was his contract. She gave him a pen and he was hesitant to sign at first. But then she tempted him, via a large screen TV, a vision of himself with Alison, showing them happy together. It made him crack and he signed the contract. She gave him a pager with instructions; Should anything with his wishes were to go wrong to hit the number "666" and she would help him out.

He made his second wish, which was to be wealthy and powerful and to be with Alison. But he did not make the wish specific. So The Devil made him a Colombian drug lord with Alison being a cheating wife who was dating Raoul, someone who worked for him. Later on Raoul would not only take his woman, but his power and money as well. When he was nearly killed, he paged The Devil She made it quite clear that he was granted everything he asked for, but he did not ask for Alison to be in love with him.

She would immediately grant his third wish, that is to be a man with sensitivity who knows the wants and needs of women. But the problem was he was too sensitive. He kept on crying about how beautiful the sun was and constantly treating Alison like she was a delicate flower. This set her off and she leaves him for a group of thuggish and rude guys. The Devil once again tricked him. He dialed her again on her pager. She got him out of that situation and told him that once again, he was not being specific.

She would make him a 7 foot tall NBA basketball player who was feared, lusted, and respected, his fourth wish. He would then meet Alison and he was charming her with his barbarian appeal. When she was ready to be with him, to his horror he discovered he was tricked yet again. His penis was for a lack of a better term, undersized. Alison left him and in his rage, he cursed The Devil to Hell. He would then pick up his pager and call her. She pulls him out and reminds him that he needed to be specific.

His next wish was to become an intellectual whose penis was a good size. He would dazzle a room full of people with his singular wit and humor. He met Alison there and it was an instant crush between the two. After a few drinks, they kissed and would go to his room only to discover that he already had a lover, another man. He was gay. After he gave another kiss to Alison, he found he was never attracted to her, sexually. He then shook her hand and bid her adieu. With a great deal of silent frustration, he picked up the pager again and called her yet again. He would make yet another wish and became president of the USA and to his horror, he was Abraham Lincoln just before his assassination at the Fords Theater.

After that wish, he said he was done with wishing. So the Devil did everything in her power to make him make another wish. He would eventually make his last wish, for Alison to have a good life. That wish null and voided the contract since it was a truly selfless act. He gets to keep his soul. The Devil and Elliot parted ways pleasantly after the Devil told him that the battle between good and evil was really about humans that do not have to look hard for Heaven and Hell for they are both here on Earth and the choices they make.

Later on, it is revealed that The Devil and the same man Elliot met in jail hinted to be God are friends. They even play games like chess together, even though she at times tries to cheat. 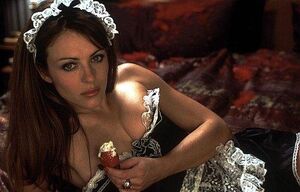 The Devil dressed up as a maid.
Add a photo to this gallery
Retrieved from "https://villains.fandom.com/wiki/The_Devil_(Bedazzled)?oldid=3553708"
Community content is available under CC-BY-SA unless otherwise noted.