Kill every group of 5 gathered sinners and collect their souls.

The Devil is the unholy soul-collecting ruler of Hell and the titular main antagonist of the story The Devil's Meeting and the 2010 supernatural thriller movie Devil.

Ramirez speaks in a voice-over about stories that his mother told him about the Devil sometimes actively seeking out individuals who have sinned, while they are still alive on Earth. While taking human form, he traps them in a confined place only to turn them against each other, before killing them all one at a time. Ramirez explains that the last victim will die in front of his or her loved one to make cynics of everyone else. He says that the signs are set in motion with a suicide, as that is when the Devil first makes his presence known. This story is abruptly interrupted by a violent suicide of a man who had fallen from the 35th floor of a Philadelphia office building. The truck he falls on rolls silently away.

Detective Bowden, a recovering alcoholic who is now assigned to the case of the suicide later explains that the reason for his alcoholism and attempted suicide was the hit and run death of his wife and son, 5 years previously, in which the perpetrator was never apprehended.

Meanwhile, five strangers board an elevator, which becomes stuck between floors. When security finds them, they notice that there is CCTV and a radio with which they can call into the elevator, but they have no way of hearing the passengers in return. Bowden takes the investigation regarding the elevator as it is the same building from which the suicide victim jumped.

Ramirez is revealed to be one of the security guards and is disturbed by an image of what looks like a screaming face frozen on the video monitor. His skeptical boss Lustig dismisses the superstitious suspicions and sends repair technician Dwight to investigate the elevators while Bowden tries to ascertain the identities of the individuals. Only four of the five are accounted for: Vince McCormick, a sleazy mattress salesman; Sarah Caraway, a pathological liar who plans to leave her rich husband and take his money with her; Ben Larson, a temporary security guard with a history of violence, Jane Kowski, an older woman who is seen on video to be a thief, and another man who later introduces himself as Tony, who does not appear to have signed in at the security desk.

The power goes on and off in the elevator and each time the power is restored, disproving what Detective Bowden thought would be the next Kensington Sniper incident, something evil takes place.

Soon people in the elevator start dying and the suspicion keeps shifting between all in the elevator. Finally Jane, who is the Devil, is left with Tony, now revealed as Tony Janekowski by his fiancée named Cheryl, who confesses to having been responsible for a hit and run five years ago. Detective Bowden hears him apologize over the radio.

The Devil, powerless now that Tony has repented of his sin, curses before vanishing, and the elevator comes back on line, sparing Tony's life. As Sarah, Ben, and Vince are wheeled away, Bowden offers to take Tony into custody for the confession, and while en route, informs him who he is. But despite saying he had gone over what he would say, or what he would do if they'd ever cross paths, he forgives Tony.

Ramirez, again in a voice-over, says that his mother always reassured him at the end of her stories, "If The Devil is real, then God must be real too.". 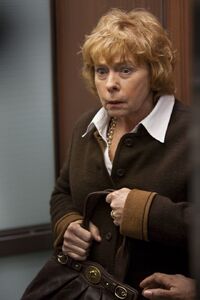 Jane Kowski before being possessed by the Devil.

Kowski about to enter the elevator.

Jane Kowski aka the Old Woman.

The Devil as Jane Kowski.

The Devil's evil stare.
Add a photo to this gallery

Retrieved from "https://villains.fandom.com/wiki/The_Devil_(Devil)?oldid=3971303"
Community content is available under CC-BY-SA unless otherwise noted.