Villains Wiki
Register
Don't have an account?
Sign In
Advertisement
in: Mature, Satan, In Love,
and 16 more

The Devil (Hell and Back)

Recapture Remy and Augie so to win Barb's heart.

Sacrifice Curt and the others.
Kill Orpheus (all failed).

The Devil is the main antagonist of the 2015 stop-motion adult comedy film Hell and Back.

He was voiced by Bob Odenkirk.

According to the Devil, he fell in love with Barb a millennia ago, but unfortunately for him, she was in a relationship with God. Without a second thought, God sends the Devil to Hell, and he becomes the ruler over the realm.

Upon hearing that the pier carnival is going bankrupt, Remy discovers a Crying Devil book, which was given to Madame Zonar by the Dark Lord himself. Forcing Curt Myers, their assistant manager, into performing a blood ritual and paying Remy back with a mint, Curt is immediately dragged into Hell when he confessed that he didn't have a mint. Augie and Remy then take a car, and they travel into the portal to save Curt.

After being discovered by two demons, they are taken to the Devil himself. Returning from a meeting, the Devil casually mentions Orpheus, a figure from Greek mythology refuted to deliver mortals from Hell. The duo is forced into hiding when the Devil realizes that Barb, an angel that he was infatuated it, was to meet him. Barb arrives, and she informs the Devil that she was sent to retrieve the two mortals that were sent to his domain. Promising him that she would do naughty things to him if he would capture the mortals, the Devil sends his minions to capture them. Unfortunately, the two are saved by Deema, a half-demon who was searching for Orpheus.

Meanwhile, Curt began to befriend the Devil by sharing drugs with him. However, he attempts to persuade him into sparing his life upon being informed that he would be sacrificed for not living up to his blood oath. He signs a contract with the Devil ensuring that he would be spared, but the Devil eats the contract, fully intent on continuing the sacrifice. The Devil then opts to sacrifice all of the protagonists; Orpheus realizes that Deema was his daughter, and he attempts to save them, but he too gets captured.

Barb arrives, and she falls in love with Orpheus upon hearing him sing. Enraged, the Devil tries to kill Orpheus with a bazooka gun filled with T-shirts. He accidentally ends up hitting Barb, and the group fall into the depths of Hell, which is inhabited by sex offender trees. Orpheus meets one tree who had raped him earlier, and states that he would forgive him, if he raped the Devil.

The group gets captured by the sex-offender trees, and before they could be violated by the sentient trees, a mint falls out of Curt's pocket. Realizing that the spell could be reversed if Remy ate the mint, he eats it, and a portal to the human realm opens. Failing to capture them, the Devil finds himself about to get raped by the tree from earlier. However, it's unknown what happened to the Devil afterwards, but it's possibly that he escaped from the sex-offender trees and secretly sneak into the carnival, since in the end of the movie he is seen being used as a High striker by a child.

The Devil is actually a comical figure who acts more like the CEO of a corporation rather than the tyrannical ruler of Hell. Rather than being genuinely villainous, the Devil instead uses weapons such as the aforementioned T-shirt bazooka cannon in order to kill Orpheus, among other things. While in the presence of his fellow demons, he appears as the stereotypical representation of Beezlebub, though he states that this is merely a business suit. In reality, the Devil is a loser who was madly in love with Barb, and ends up falling out of favor with her when she chose Orpheus. 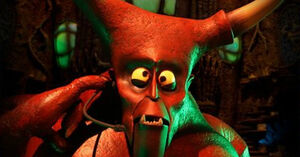 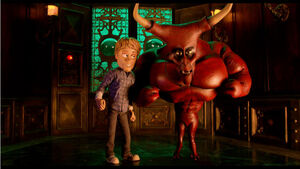 Curt with the devil

The Devil and Barb. 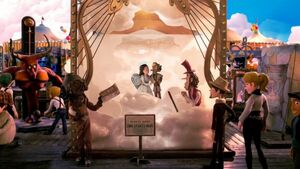 The Devil's defeat and humiliation