Villains Wiki
Register
Don't have an account?
Sign In
Advertisement
in: Articles under construction, Spoilers, Satan,
and 78 more

The Devil (The Cuphead Show!)

Founder and Owner of the Carnevil (formerly)

Harvest the souls of Inkwell Isle's residents through the Carnevil (temporarily succeeded).

Get revenge on Cuphead for destroying the Carnevil by claiming his soul through any means necessary (ongoing).

The Devil is the main antagonist of the 2022 Netflix animated series, The Cuphead Show!.

He is the demonic ruler of the Underworld, the boss of King Dice and various demons including Henchman and Stickler, and Cuphead and Mugman's archenemy. Using his carnival business to bring souls to the Underworld, his plans were foiled when Cuphead and Mugman outsmarted him and destroyed his carnival, putting him at odds with the brothers and leading him to attempt to claim Cuphead's soul at all costs after the latter lost his game, unwillingly owing his soul to the Devil.

He is voiced by Luke Millington-Drake.

The Devil mostly resembles his game counterpart with a few changes. The Devil now is always depicted with a tail (unlike in the game), his nose is red, and the red irises he is only occasionally depicted with in-game are now a permanent part of his design. His fur, horns, and claws have both also gained slight blue and yellow tints, and his ears are a bit longer and spikier.

The Devil is manipulative and evil with a flamboyant demeanor and an obsession with collecting souls. He's more jolly and playful than he is in the game, and behaves in a more childish manner. However, he can be very intimidating, shown when he threatens King Dice after his failure.

The Devil is also more actively involved in pursuing his goals than his counterpart character from the game.

The Devil is the demonic ruler of the Underworld beneath the Inkwell Isles. He often plays cruel tricks upon the archipelago's inhabitants and comes up with evil schemes to collect their souls (which is unexplained). His former right-hand man, King Dice, also worked in collecting souls for him while presenting as a popular celebrity.

At some point, the Devil sets up a sinister carnival (spelled Carnevil) to attract victims, and if they lose a game, their souls get sucked out and are then transported directly to him. However, his scheme his interrupted by the arrival of Cuphead, who begins a winning streak at a skee-ball booth. Angered by this, the Devil appears and scares away the other patrons and approaches both Cuphead and his brother, Mugman. Cuphead nearly loses his soul in the process, but Mugman saves him and they both run for it. The Devil chases them down while spewing fire at them. Afterwards, Mugman gets an idea and as the Devil fires one last shot from his trident against the brothers, they jump out of the way in time, causing him to destroy the skew-ball booth, and by extension, the pipes connected to his Soul Vault, freeing the captured souls, much to the Devil’s anger. The Carnevil was destroyed during the scuffle and the Devil swears his revenge on Cuphead.

Later on, the Devil is taking a bubble bath when he gets a call from King Dice that he had just captured Cuphead, making him proud. He then warns King Dice not to fail him or else before hanging up. Later after King Dice fails he fires him from his role as both "Number One" and the host of "Roll the dice".

After that, he decided to have a celebration in honor of himself, only for Stickler to point out that he has not yet collected Cuphead's soul. Soon he tries to take Cuphead's soul quick to only notice that Cuphead was wearing an invisible sweater that blocks him off, then he tries to get Cuphead to take off the sweater almost succeeding with this anger then failing by Mugman giving Cuphead a hug blocking also his flames causing him to go crazy. Then he returns ripping apart Stickler's book to give him time.

Afterwards, he decides to try and take Cuphead's soul failing many times despite knowing Cuphead has the sweater. Then he makes a deal to paint the fence so that Cuphead could take off the sweater in return. After finishing, he notices he was tricked then goes to the carnival where Cuphead and Mugman are, later for Mugman to go to get this sweater. After hearing some jokes from Cuphead he finally notices that Cuphead isn't wearing the sweater, by then trying to take his soul, almost succeeding, if it weren't for Mugman putting the sweater on him. Now he notices he can now take Cuphead's soul whenever he wants, but it will most likely be when his wounds heal. 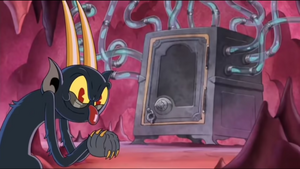 The Devil next to his soul vault. 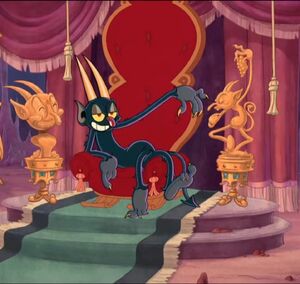 The Devil on his throne. 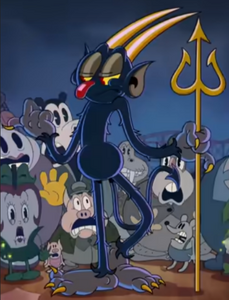 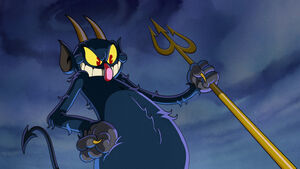 The Devil’s evil grin when he confronts the Cup Brothers. 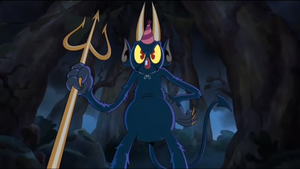 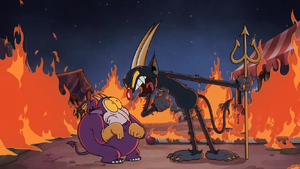 "His soul belongs to me!" The Devil swearing revenge on Cuphead, thus becoming the Cup Brothers' archenemy 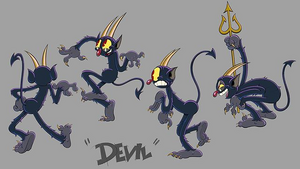 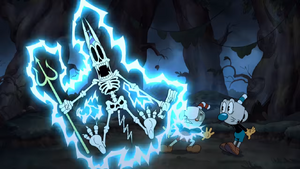 The Devil getting shocked by Cuphead's invisible sweater. 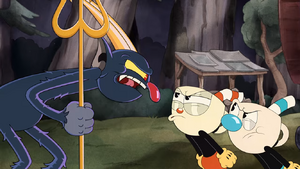 The Devil confronting Cuphead and Mugman at their house,