Villains Wiki
Register
Don't have an account?
Sign In
Advertisement
in: Demon, Immortals, The Simpsons Villains,
and 50 more

The Devil (The Simpsons)

Take over the world and the universe

The Devil, also known as Satan, is in charge of Hell and a major antagonist in the TV show The Simpsons. Ironically, Ned Flanders is sometimes the Devil.

He often appears in visions or dreams. Whenever Charles Montgomery Burns has a near death experience, Satan tries to get Burns there, but continually fails, much to his fury.

He also appears in the music video "Deep, Deep Trouble" after Bart ends with him. Bart was ordered to be reincarnated but as a snail.

The Devil appeared in "Treehouse of Horror XI" at the end of the segment "G-G-Ghost D-D-Dad". Homer could not fulfill his good deed in time and was sentenced to Hell where the Devil was waiting for him. Homer tried to scare him but the Devil rebuffed and sentenced him to an eternity of horrible pain. He then gives him noogies much like Nelson Muntz earlier, making Homer squeal to which Satan told him to be quiet or he would wake up John Wayne, but the deceased iconic actor was already up.

The Devil also appeared in "Treehouse of Horror XXII", in the segment "Dial 'D' for Diddily" and he is referred to as being in charge of God himself, and when Ned Flanders says "Can this get any worse?" then it turns out that Maude Flanders is sleeping with the Devil.

During one of the segments of "Treehouse of Horror XXIII" that parodies the Paranormal Activity series, The Devil returns, this time being a monstrous being resembling Moe that Marge apparently made a deal with when younger. 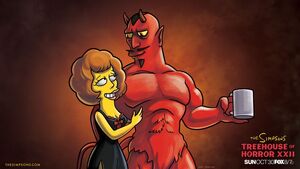 The Devil with Maude 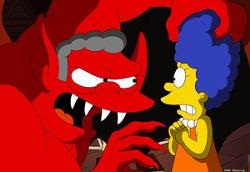 The Devil as Moe 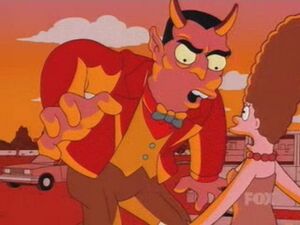 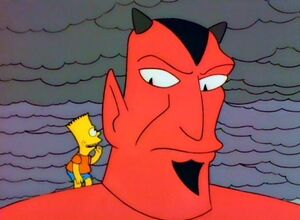 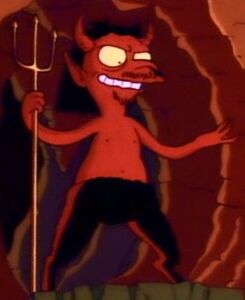 The Devil's original appearance in season 2 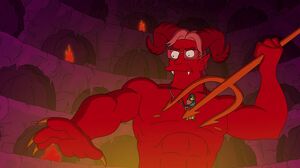 The Devil as Richard Dawkins 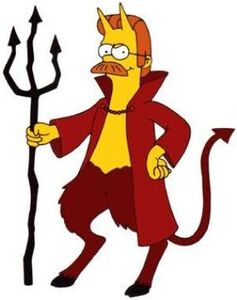 The Devil as Ned Flanders