Villains Wiki
Register
Don't have an account?
Sign In
Advertisement
in: Symbolic, Demon, Tom and Jerry Villains,
and 13 more

"The Devil" or "Devil" refers to a symbolic villain found in Tom & Jerry and represents the evil side of Jerry Mouse, being a horned version of the protagonist rodent with green fur and a habit of appearing in order to try and tempt Jerry into doing evil - he may also be an embodiment of jealousy as he appears often when Tom is distracted and thus ignored Jerry (usually when Tom is lovestruck).

"Devil" is not an official name (the creature lacks one) but is fitting as the creature is clearly meant to represent a Devil (small demonic creatures popularly believed to tempt people into doing evil - in fiction they are often opposed by an angel, representing a character's conscience).

"Devil" under the name "Devil Jerry" appears in the 2000 Game Boy Color videogame Tom & Jerry: Mouse Attacks! (Tom & Jerry in Mouse Attacks!) as the opposite of his benevolent counterpart named Angel Jerry and he is mean by his looks but not by his nature however.

"Devil" should not be confused with Satan - who (believe it or not) actually appeared in Tom & Jerry (in the form of a demonic Spike) during "Heavenly Puss" though this was actually a nightmare on Tom's half. 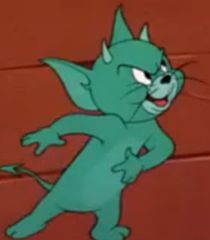 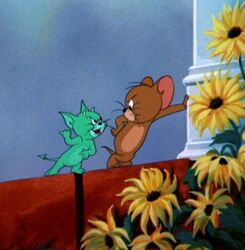 The "Devil" is the dark half of Jerry Mouse.