The Devil
Satan
Beelzebub
Mephistopheles
Lord of Darkness
King of Darkness
Prince of Darkness
Lord of Illusion
Prince of Lies
Father of Lies
Lord of Lies
The Dragon
The Great Deceiver
The Deceiver
The Morning Star
The Adversary
The Accuser
The Fallen Angel
The Serpent
The Snake
Nicholas Scratch
Mr. Stratch
Old Stratch
Old Nick
Pol Gornek
Iblis
Shaitan
Shataan
Lord of Vermin
Abaddon
Belial
Man of Sin
Son of Perdition
The Wicked One
The Light Bringer
King of Hell
The Evil One
The Dark One
Lord of the Flies
The Darkness
Angel of Darkness
Apollyon
The Archfiend
The Evil Spirit
The Anti-God
The Evil

Corrupt humanity and damn all of them to Hell.

Overthrow God.
Rule Heaven and the rest of the universe (all ongoing).

He is regarded by many religions as the supreme overlord of Hell and demons. Alternatively, he is also considered to be the living embodiment of evil, whose power is second only to that of God. Although Satan was originally a Judeo-Christian concept, almost all orthodox religions have an evil godlike (or semi-godlike) figure that can be said to be connected to Satan in their mannerism and purpose.

To some, Satan is nigh-omnipotent, whilst others limit his power to only corrupting or deceiving mankind. Some religions do not regard Satan as absolute evil, believing that he serves to test people's faith through suffering. However, in the popular mind, Satan will always embody the evil demonic influence in the universe, though, in the Bible, his role was outranked by evil humans themselves.

In the Old Testament, Satan was originally called Lucifer, the Morning Star, which means "light-bearer". He was a cherub, according to one interpretation of Ezekiel 28:12-15. Some Christians believe that Lucifer was the first of the angels and had no superior other than God Himself. Lucifer also held the position of Accuser and would act as a kind of prosecutor in Heaven.

Eventually, following the creation of humanity, he grew prideful and jealous of God's power as well as humanity for being favored by God over him and attempted to overthrow Him, gathering up legions of followers in his fellow angels and revolting against God in the first war in Heaven. He was defeated by Michael the Archangel and cast into Hell as punishment. Satan also once attempted to undermine God's power by tempting Jesus Christ into bowing down and worshiping him, though Jesus refused to do so. Satan also attempted to convince Jesus not to be crucified as he would lose power because Jesus would bear the weight of humanity's sins. It is said that on the Day of Judgment, Satan shall rise to power again and lead another war against Heaven, only this time, he and his followers will be cast down by God Himself and sent to the Lake of Fire as an eternal punishment for their many sins.

Unlike many depictions in popular culture, the Bible never explicitly states that Satan is the ruler of Hell. He is implied to be currently roaming around the world, according to Job 1:7 and 1 Peter 5:8.

In some interpretations of the Old Testament, he is simply an angel referred to as Ha-Satan, or the Accuser. It is important to note that he was viewed as the enemy of man, not God. He was one of God's closest angelic advisers, though alternatively, it could be said that God was using or manipulating him to be His adviser. Satan's job was to tempt man away from God's law, which was intended as a means of testing man's righteousness and loyalty to God.

In Islamic belief, Satan is referred to as Iblis and did not rebel against God out of a jealousy of the Creator's power, but rather out of contempt for mankind, whom God created and had his other creations bow down to. Iblis refused to bow to mankind and was thus banished from Jannah, or "Paradise", and given only the power to corrupt humans until the day God would return to pass judgment on the world. Some say that he only knelt before God.

The Devil is a popular figure in folklore and has appeared in countless legends around the world. A folk Devil is often more of a trickster than a malevolent embodiment of pure evil, but at the same time, is often seeking the souls of unfortunate mortals via trickery. Many haunted places in the world are said to have connections with Satan or the Devil, and some areas are even named after him. A famous example of Satan in folklore is the Jersey Devil, which is said to have been created when a woman yelled out "Let it be the Devil!" when pregnant with a baby, and to her surprise, her wish came true.

In popular culture, Satan is depicted as a red-skinned humanoid with the legs of a goat. Similar in many ways to the Roman god Pan, he varies from having red dragon-like wings or none at all and tends to have a long tail with a forked end. His weapon of choice tends to be a trident, and he is always seen tending to the fires of hell or tempting some poor soul. An adept shapeshifter, Satan is said to take on any form he pleases in order to tempt people, but the satyr form, known as a Devil, remains one of his most famous personas.

Satan is also frequently confused with Baphomet, a goat-headed demon strongly associated with black magic, and due to this, the two beings often merge. This is also the case of many of Satan's alter-egos, such as Beelzebub (lord of flies) or Baal. Many of Satan's alter-egos are based on ancient fertility gods or pagan deities that the early church viewed as evil, and thus added into an infernal hierarchy of demons with Satan as their lord and master. Over the centuries, however, demonology became less popular, and the infernal hierarchy concept faded away, though some still believe in it.

Satan is the embodiment of evil. In the story of Adam and Eve, Satan is represented as the Serpent, a mysterious talking snake who is the recurring symbol of deception and temptation. He tricks Eve into eating the forbidden fruit from the Tree of Knowledge (Tree of Conception) through deception and manipulation. It is said that sin is caused by temptation, which, in turn, is caused by Satan, thus, Satan was responsible for mankind's first sin.

Satan also embodies the evil parts of humanity that most civilized people frown upon. These things include violence, lust, and a lack of faith, and serve as a reminder of the more animalistic, or savage, origins that humans may have had. They also represent the fear that without proper guidelines, such as the Biblical Commandments or modern law, we would return to such savage behavior. A good example of this thought is seen in the story The Lord of the Flies.

Satan and other Satan-based villains are the chief antagonists of innumerable television shows, movies, video games, and novels. Though he is often renamed and his religious origins toned down out of the great controversy, his very name can inspire certain groups, mainly for politically incorrect shock value without actually having to believe in Satan or Satanism. Popular examples include bands belonging to particular subgenres of metal, particularly black and death metal.

Some notable films, novels, and other media that has Satan and Satan-based villains as the chief antagonist are: 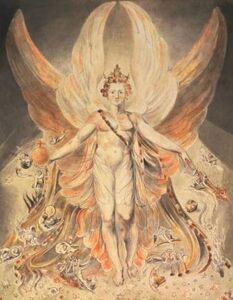 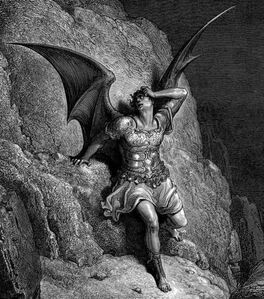 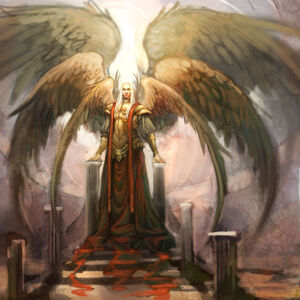 Lucifer depicted as a seraph. 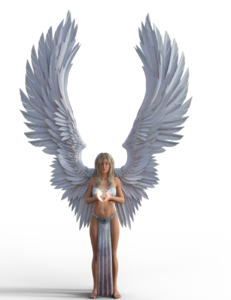 Lucifer as the Prince of the Angels and an Angel of Light. 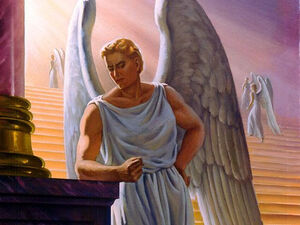 Lucifer in Heaven, plotting his rebellion. 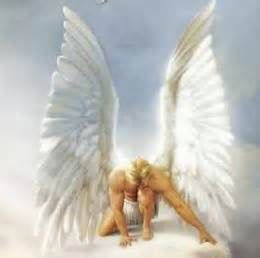 The Fall of Lucifer. 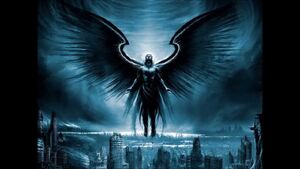 Lucifer's return as Satan during the Apocalypse. 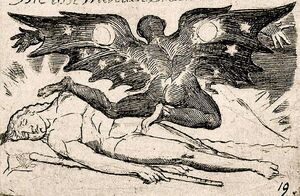 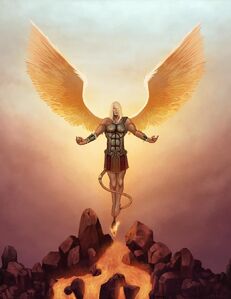 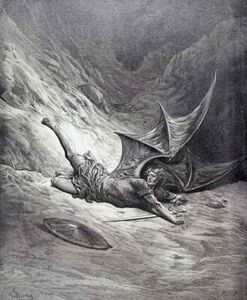 Lucifer having been cast out of Heaven. 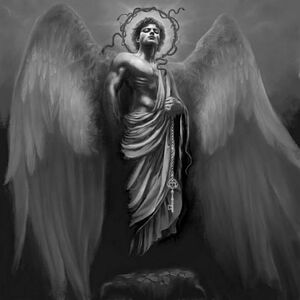 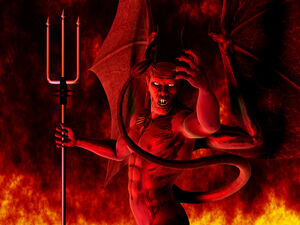 A classic depiction of the Devil. 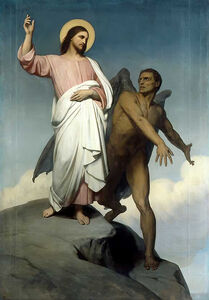 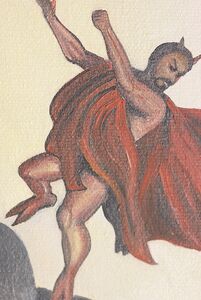 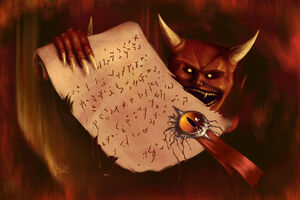 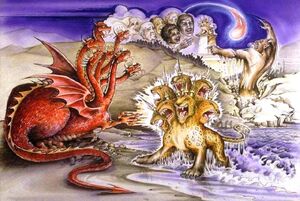 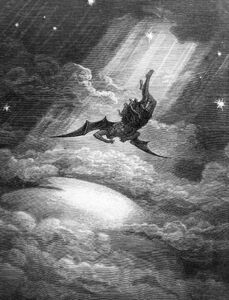 The Devil being cast out of Heaven in Paradise Lost. 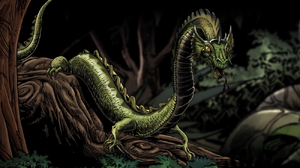 The Devil as the Serpent of Eden. 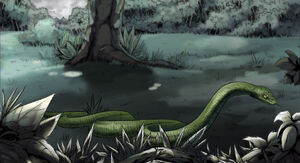 The Serpent, having been punished by God to slither on the ground after tempting Adam and Eve. 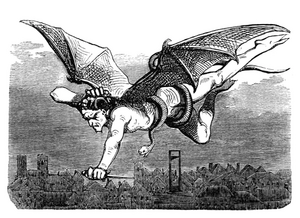 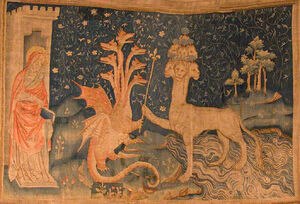 The Devil giving the Antichrist authority over the world.