Kill Spawn and prevent him from stopping Armageddon (failed).

The Disciple is a minor antagonist in the Spawn comics. He was the predecessor of The Redeemer, considered to be Heaven's greatest warrior. He watches over the Dead Zone, in which his first encounter with Spawn took place and proceeded to battle him.

During his second battle with the Hellspawn, it is revealed that the Disciple is a group of twelve, powerful warriors that carry the name and that this particular one was the twelveth one, once known as James the Less, the weakest amongst them.

The Disciple's appearance is that of a large, armored warrior. His black suit is covered in a silver armor and he bears a mask with a cross like the Redeemer, but with a flaming XII over his right eye. He appears to have suffered a large amount of battle damage, as his ravaged armor and mask have numerous gouges and holes and from them spills Celestial Fire.

The Disciple first appears in Spawn #150 He was Heaven's first and greatest soldier in their war against the forces of Hell His origins are unknown but his power is great. He appears to be the archetype and prototype for the The Reedeemer, and is definitely a formidable enemy for  the Hellspawns.

As the Redeemer's prdecessor, he possess the same powers only far more enhanced. He wields the ability to utilize pyrokinesis, controlling his flames to his will. The fire also appears to take the form of wings on his back. 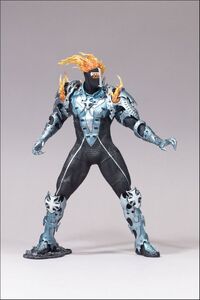 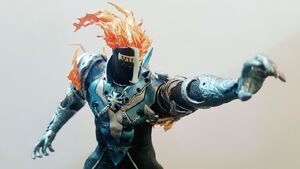 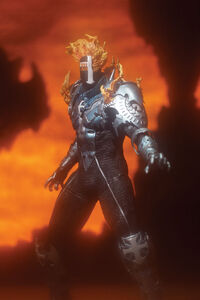 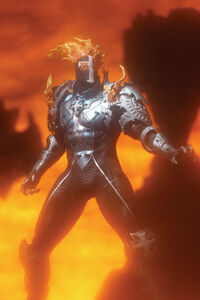