Control over Balrog and Misery
Superhuman strength (when mutated)

Turn all of humanity into monstrous slaves to him.

Kill Quote and anyone else who opposes him (both failed).

Doctor Fuyuhiko Date, better known as The Doctor, is the main antagonist of the videogame Cave Story. He is a tall, bespectacled man with tan skin and green hair. He seeks to dominate the world with an army controlled by the Red Flowers.

Fuyuhiko Date was accompanying Professor Booster and Momorin Sakamoto on their research expedition to the Island, serving as their medical doctor. However, his true intention was to find the fabled Demon Crown; after he donned the artifact and gained its powers, he terrorized the researchers, attempted to drop Momorin off the Island, and began abducting the inhabitants of the Mimiga Village. Date and his new minions, Misery and Balrog, began to search for the Red Flowers with the ultimate goal of turning the Mimigas into rabbit warmachines to unleash upon the Surface, in a bid to rule the world.

Despite the efforts of Quote and Curly Brace, Date succeeded in finding the Red Flowers and enslaving nearly all of the Mimigas. In addition, he also found a way to concentrate the power of the Red Flowers into a floating red crystal, which affects humans too. Quote confronts Date within a tower on the Balcony, where Date uses himself as a test subject for his new crystal to increase his power. Partway through the battle, Date is unable to control the Crystal's power, resulting in the mutation of his body into a hulking, ogreish monster. Ultimately, the Doctor is defeated, and his body dissolves into a misty cloud of blood.

In the top chamber of the tower where Misery has taken Sue hostage, the Doctor reveals himself to be very much alive, despite the destruction of his human form, and floats into the room as a sentient cloud of blood mist. Misery, wishing to be free of the Doctor's plans, attempts to destroy him, but her magic attacks have no effect on the Doctor's gaseous avatar. He decides to punish Misery for dissent, enveloping her in his cloud and causing her to mutate, before possessing the Core. Sue attempts to flee, but is caught by the Doctor's crystal and mutated. Ultimately, Quote destroys the Undead Core, freeing Sue and Misery and ending the Doctor's life. 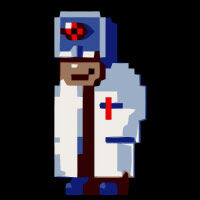 The Doctor's sprite in the game.
Add a photo to this gallery

Retrieved from "https://villains.fandom.com/wiki/The_Doctor_(Cave_Story)?oldid=4153589"
Community content is available under CC-BY-SA unless otherwise noted.