The Doctor (Dead by Daylight)

Experimenting on others (formerly).

Sacrifice the survivors to The Entity (currently).

Herman Carter, better known as The Doctor, is one of the playable killers in Dead by Daylight.

He is voiced by Alex Lin.

Herman Carter started off as a normal man with an obsession of the human psyche to deconstruct something as powerful as the human brain. He was a star pupil among his teachers, good in high school, and was published in a psychological gazette. Even here and at Yale's neuroscience program (a front for the CIA), Herman was a vicious figure, nightmarishly torturing his fellow classmates for an experiment on interrogation to gain data. After having the other leader kill the other subjects, the staff at the medical school were so impressed that they recommended him to the CIA.

At Léry's Memorial Institute, he became the one who interrogated anyone and under his mentor Otto Stamper got the tools he needed and gained the knowledge he needed because after all knowledge is power. Mr. Stampler encouraged Carter's inhumane methods onto prisoners but Carter eventually snapped and killed or experimented on everyone in Léry's Memorial Institute, including his mentor due to his obsession with knowledge and mind control. The horrified government condemned the building and redacted the information on it, with info on it likely staying so forever.

As the Doctor, he later became one of The Entity's servants and granted him electrical powers which he uses to his kill and induce madness on his prey.

The Doctor's Memento Mori involves him charging up his hands with electricity, grabbing the victims head to conduct the power through their brain. The Doctor turns the corpse, frozen in a pose, inspecting his victim before standing up. 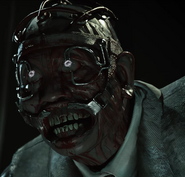 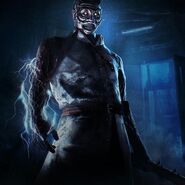 Herman Carter torturing his victims in his past life.

Herman Carter getting detained by the CIA.

Herman transforming into The Doctor.

Herman Carter on the Dead by Daylight Wiki.