Creating his own private experiments.

Mutilating his victims (or making them mutilate themselves).

Turning Fish Mooney into his lab rat.
To keep running his nefarious operations (all failed).

Dr. Francis Dulmacher, a.k.a. The Dollmaker, is a supporting antagonist in the first season of Gotham. A wealthy, respected doctor who runs a private hospital on his island, he is really a cold-hearted sociopath who engages in mass abduction, organ harvesting, and human experimentation.

He was originally the unseen overarching antagonist in the second episode of season one "Selina Kyle", and then appeared in the second half of the season as the main antagonist in a subplot involving Fish Mooney at his prison, and made two appearances in "Everyone Has a Cobblepot" and "Beasts of Prey".

He was portrayed by Colm Feore, who also portrayed Laufey from Thor, Donald Menken from The Amazing Spider-Man 2, Randall Flynn from Revolution, and André Linoge from 'Stephen King's Storm of the Century.

The Dollmaker has been running his operation for years, kidnapping innocent people and imprisoning them, so he can harvest their organs and body parts for his wealthy clients. He sent two of his lackeys, Patti and Doug, to Gotham, to abduct all the city's homeless children to ship them to his island, for this purpose. Thankfully, they were prevented by the actions of Detective James Gordon and Detective Harvey Bullock with some help from Selina Kyle.

He likewise had his henchmen raid boats to kidnap new victims. One such victim was fleeing former crime boss Fish Mooney. However, Fish took over for the prisoners, and manage to mobilize them so that they would beat any man called for organ harvesting to death, before Dollmaker's henchmen could get hold of them. Forcing his hospital manager to meet her, he however was ordered to remove her eyes for harvesting purposes. However, Fish managed to stop them by scooping out her own eye and crushing it.

Impressed by this, the Dollmaker gave her a new eye and agreed to meet. Fish offered to work for him, claiming as a crime boss she could be useful. The Dollmaker set her a test of breaking up her own resistance, but before he did he showed her the effects of what happened to people who failed him, by revealing what he did to his former manager. He experimented on the poor, replaced several of his body parts with ones that did not fit, and kept him alive throughout the whole process.

Fish succeeded, and gained the job. However, the Dollmaker told her there was no way to escape his island and gave his thugs orders to kill her if she got outside again. However, Fish managed to formulate a plan to escape, and steal the Dollmaker's key.

Realizing this, he confronted her, planning to personally beat her senseless. However, she had already released his former prisoners, who angrily beat him to blood for imprisoning and harvesting them. They didn't have time to kill him, so they were forced to run, leaving the still breathing madman lying on the floor in pain. 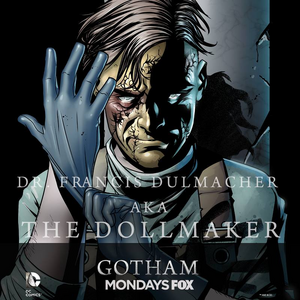