Kidnap an entire community of alien children and imprison them inside a factory (succeeded).

The Dominator is the main antagonist of Episode XCVI of season 5 in the Samurai Jack series.

He was voiced by Aaron LaPlante, who also played The Omen, another Season 5 villain in Samurai Jack.

The Dominator was a human male who had ransacked a village of extraterrestrials, taking the children to a factory to be used as an energy source. When Jack and Ashi arrive at the factory, the Dominator releases the brainwashed children onto them and takes Ashi hostage. Figuring that she must've been a sympathizer for Jack, he subjects Ashi to near-lethal electroshock torture only to need to refuel. Throughout this, he expresses his hatred for children, gloating about how easy it is to brainwash them, and he also comments Ashi for her "pretty face". Unbeknownst to him, Ashi had experienced abuse by her mother's hand, which she uses to overcome her restraints.

Much to the surprise of the Dominator, Ashi frees herself and proceeds to lay a brutal beat-down on him, causing his metallic suit to malfunction. Ashi then throws the unconscious Dominator into the control panel, causing it to explode, killing him in the process.

Very little is known about the Dominator in the short screen time he had. It is implied that he is either a minion of Aku or simply a rouge psychopath given the will to harm others in light of Aku's rule.

From what everybody sees of him, the Dominator is cruel, uncaring, and destructive, taking sadistic pleasure in his crimes with a joyful tone of voice. He also seems to hate children, calling them "brats" and making them his primary targets, as well as referring to them as "foolish things". He mocks Jack's efforts to avoid harming the children, seeing his unwillingness to harm an innocent as weak by calling him a "righteous fool".

The Dominator also seems to have a lustful side as he hits on Ashi when he captures her and feels her face without her consent. 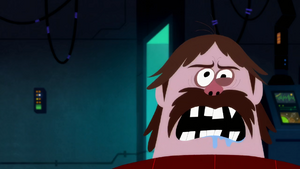 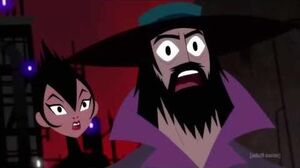 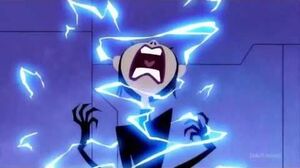