Defeat the Seven Soldiers of Victory.

Inventive Supervillain
The Dummy is an antagonist in the DC Comics universe. He is one of the archenemies of Vigilante as well as an enemy of the Seven Soldiers of Victory, the All-Star Squadron, Captain Marvel, and Infinity Inc. Two individuals have used The Dummy persona. The first one is an unnamed criminal and the second one is Daniel Matthews.

The first appearance of The Dummy is where he is present alongside a group of other bad guys who are all summoned by by the Hand (DC) to commit crimes across the United States of America. This causes the Seven Soldiers of Victory to be brought into action for the first time. The villains would be taken down by the superheores and The Dummy was defeated by Vigilante, which was revealed that he had clashed frequently with Vigilante in untold stories. The Dummy would try to challenge the Seven Soldiers of Victory by himself and fought Vigilante multiple times but he was defeated each time.

The Dummy would be responsible for the death of Vigilante's sidekick Stuff the Chinatown Kid. However, due to the events of Crisis on Infinite Earths, this was later retconned. Instead in the mini-series Vigilante: City Lights, Prairie Justice Stuff is killed by the mobster Bugsy Siegel. The Dummy would reappear in All-Star Squadron, in which he was recruited by the Monster Society of Evil in a plot to help them take over the Earth (this was Pre-Crisis at the time). It is revealed in the comic that when he battled the Green Lantern Alan Scott, he passed through Scott's energy force-field unimpeded which indicated that he indeed was an animated ventriloquist dummy (due to The Dummy's body being made out of wood which made him immune to Scott's power).

The Dummy would return again in as a member of Mister Mind's Monster Society but it was a larger and more powerful group. They would try to take over the Earth but would be impeded by Captain Marvel. Their battle against him lasted for almost two years before they were defeated with Mister Mind being executed, via the electric chair, for his war-crimes (although it was later revealed he survived due to his alien species being immune to electic shock). The Dummy would later become the leader of Injustice Unlimited and fought Infinity, Inc. but would eventually be defeated.

Daniel was a midget who was referred to as Danny the Dummy for his ventriloquist performance in which he would pose as the dummy controlled by his assistant Matt, but in a surprise twist, Daniel revealed that he was the ventriloquist all along. However, his fame cost him a normal life in society as he couldn't go anywhere without people calling him "dummy". Daniel became infuriated and would resort to crime. He had started a criminal spree and would force people to act strangely, making them appear as literal dummies. This caused Batman and Robin to confront Daniel and he would be defeated by the Dynamic Duo and was taken off to jail. 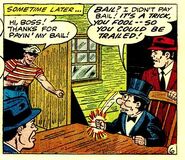 Daniel Matthews as the Dummy. 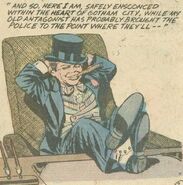 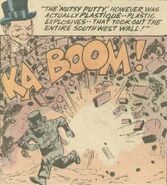 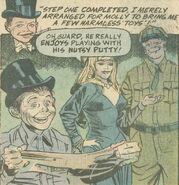 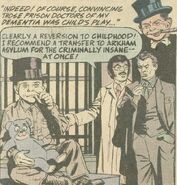