The Eagle (Benji the Hunted)

Kill the cougar cubs at any cost (failed).

The Eagle is a supporting antagonist in Disney's 1987 drama film Benji the Hunted. He is a ferocious bird of prey who wants to kill every cougar cub in the forest. He is the Timber Wolf's henchman.

His vocal sound effects were provided by Corey Burton.

Though the Eagle is a dangerous and aggressive predator who is just trying to survive like realistic predators, he is also regarded as a villainous character due to the fact that his antagonism and villainy are motivated by his odds with Benji and the cubs. However, the Eagle seemed to focus more on the cubs than Benji, which is seemingly obvious due to the fact that he was denied the opportunity to eat the cubs. The Eagle seemed to be a close companion to the Wolf as he signals him to chase Benji for the first time.

The Eagle is first seen watching Benji protect the cubs from above.

As the Mother Cougar and her cub are walking through the forest, the Eagle signals the Wolf to ambush Benji, but Benji manages to elude him.

After Frank Inn leaves, the Eagle swoops down, grabs one of the cubs in his talons and flies off. But, the Eagle either accidentally drops the cub or puts it in its nest in which Benji sees the cub in the nest and rescue it just as the Eagle flies towards the three other cubs for another success chance of grabbing a cub, Forunately, Benji barks at the eagle and scares it away in time.

It is unknown what happened to the Eagle afterwards, but he was most likely killed by the Wolf after he failed to kill all the cubs. 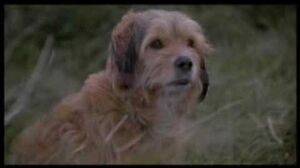