Millions of Years Ago

Controls aspects of the elements across existence

Take control of all life on Earth so they can rule it (failed).

Kill anybody who stands in their way (failed).

Hegemonic Immortals
The Elementals are villains from the Marvel Universe. They are a team of four powerful immortals who each control an aspect of nature.

The Elementals were later returned to Earth and pursued Zephyr and the Scarab. Ms. Marvel arrived and fought the Elementals, defeating them one by one.

During the "Dark Reign" storyline, Quasimodo researched the Elementals alongside other villains for Norman Osborn.

Adapted variations of the Elementals appear as major antagonists in the 2019 superhero film, Spider-Man: Far From Home. In this version, they are holograms projected by Mysterio under the guise of being powerful deities from Earth-833. Their membership consists of the franchise's versions of Molten Man, Hydro-Man and Sandman, while an air element called Cyclone was only mentioned, and a fusion of all four is seen near the end of the film.

Back in ancient times, Mandarin made a deal with the Deities of Death. They helped Mandarin by giving the powers to destroy China, they also helped create the Elementals. The Elementals being Earth, Fire, Wind and Ice. At the temple, the eyes in the image of the dragon begin to glow. The fog rolls up closer to the statue of the Mandarin and the four surrounding him. A creaking sound is heard just before the ground explodes upwards and the pieces swirl around the statue.

Suddenly the statues burst revealing four of the Demon Elementals. Earth Spirit, Ice Spirit, Fire Spirit and Wind Spirit. They each drop off their pedestals and gather on the image of the dragon. Wind brings its two fans out and begins twirling them around. A large storm is call forth and the four elementals are carried off.

A large tornado appears over England and drops off the four elementals. People go flying and buses crash into each other because of the wind. The four land and Earth slams the ground opening a large hole. The four drop down to see a decayed skeleton wearing a shiny ring.

In a snow capped mountain range in Switzerland, a storm builds and the four elementals descend once again. They land on a small ledge on the side of a cliff. The four burst into a cavern to find another decayed body. The ring on the skeleton's finger begins glowing as the four approach.

Over the Atlantic the elementals form another storm and drop into the ocean. As Wind Spirit creates a funnel down to the underwater temple, Ice Spirit freezes it around them. Deep below, soot covering the temple is uncovered as air is brought down. The entire temple is frozen around them. The four enter the ruins to find the hovering body of the monk perfectly preserved in the center. Earth hovers over to him and breaks the ring off along with the finger. The finger soon turns to dust. Soon the rest of the monk's body shrivels and turns to dust until all that is left is the clothes.

Iron Man shows up, The four elementals leave the temple but hear the ice breaking. Suddenly Iron Man breaks through the icy barrier allowing water to pour in. He flies out of the stream and scans the elementals. However, the spectral analysis comes up with nothing.

Ice flies up to attack Iron Man so the hero fires his beams at him. However, he is knocked back into the temple. The elementals fly around him as he gets up. Earth destroys a large pillar and Wind blows it towards the hero. He flies back into the ice opening another hole. The force of the water push him onto the temple steps.

Fire then walks up behind him and fires at him. Iron Man fires his beam knocking the elemental back. Iron Man and the elemental fly over the water but a wave catches the female force and she falls. She tries to get up but Iron Man blasts her apart destroying her.

Earth soon appears and slams Iron Man into the temple. He rises up and slams down on the top of the temple causing it to collapse trapping Iron Man underneath. The three remaining elementals fly up as the water rises.

Deep within the twisted caverns of the volcano the three elementals spot the last decayed corpse with the ring. Just as Earth is about to grab it, Iron Man fires his beam knocking the ring into the lava. Iron Man then dives into the lava after it. However, Earth also follows the ring down.

Wind and Ice walk up to the lava's edge waiting for Earth to emerge. Suddenly a large fountain of lava bursts up. Iron Man flies up and his shield goes off. He lands on the side and the ring drops out of his hand.

Suddenly the ground beneath the ring forms a hand and Earth rises up. The other two elementals hover over to join him. Earth opens a hole into his belt, drops the ring in, and closes the hole.

The three elementals run up to Iron Man and Earth smashes his hammer into his chest. Iron Man falls but it hit once again. Earth pushes him against the wall lifting him up. Iron Man scans the other two approaching elementals. He then activates his chest beam and knocks all of them away.

Ice attacks but Iron Man drops down to dodge. He dodges Wind's first attack but is hit by the next two. He is pushed back onto the ledge which breaks off. As Iron Man rides the rock over the lava Ice and Wind hover over the lava coming towards him.

Iron Man stands and fires his beams that they easily dodge. Wind leaps into the air and Iron Man hits him dead on. However, Wind simply dissipates and reforms behind him. Iron Man tries to fly away but Wind will not let him.

Iron Man spots Ice coming at him and fires his beam at Wind's feet. Wind gets distracted and Iron Man falls down barely missing Ice's spear. However, the spear hit Wind who freezes and falls into the lava.

Iron Man flies around and grabs Ice. Though his hands freeze he lifts him up. He activates his energy shield and dives into the lava. Once under he lets Ice go causing him to quickly dissolve.

He heads back up and sees Earth reforming himself. He tackles Earth and starts punching his head. However, Earth merely grabs his head, stands, and reforms his hammer. He twirls it around, drops Iron Man, and smashes his chest.

Iron Man turns around and fires his beams at Earth's head. He starts to punch Earth's stomach as he reforms his head. As Earth recovers he punches Iron Man knocking him back. Earth suddenly looks down to see that the area around his belt is broken. Iron Man looks up and shows him that he has one of the rings, Earth runs forward.

Back at the ancient city, the fog slowly lightens up. Earth suddenly bursts through the ground. He stands and walks along the Terracotta army around him. He then emits a blast of light out of his hammer. Soon the entire army is uncovered. As the winds of the blast die down Earth continues his march among the army. Earth looks up to see Iron Man suddenly slamming him into the ground.

Iron Man gets up and tries to shake it off, but Earth stands and grabs his head. He picks Iron Man up and tries to crush him. Iron Man struggles to get Earth's hand off of head. Iron Man suddenly activates his boots and blasts up into the air.

Once they get up high Iron Man turns off the boots and they begin free falling. Earth tries to punch him but Iron Man is too far away. Earth suddenly flies forward to catch Iron Man.  As Iron Man and Earth move closer together Iron Man fires his beams damaging the elemental. He then flies through him completely destroying his body. The four rings and Earth's mask fall to the ground. 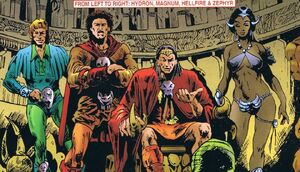 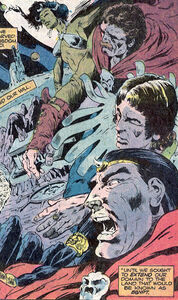 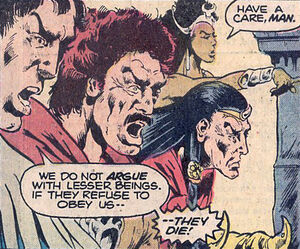 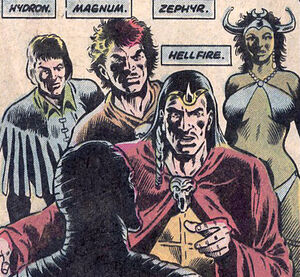 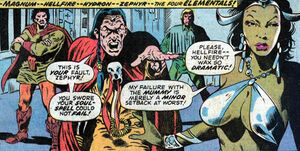 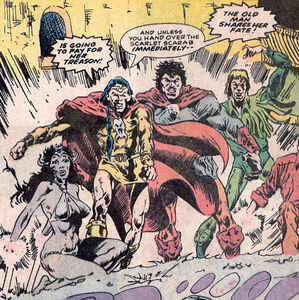 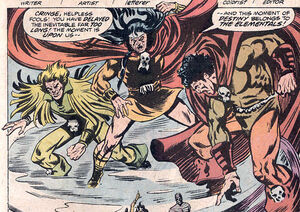 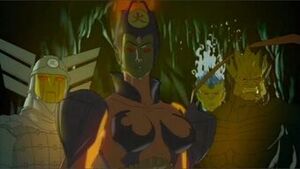 The Elementals in The Invincible Iron Man 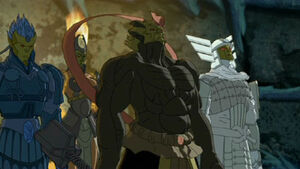 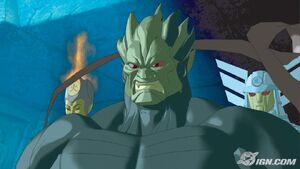 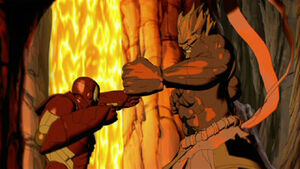 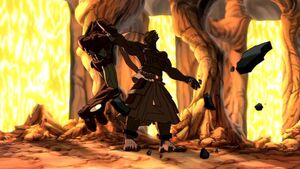 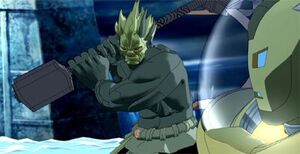 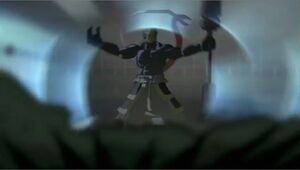 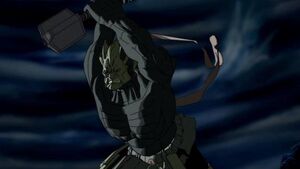 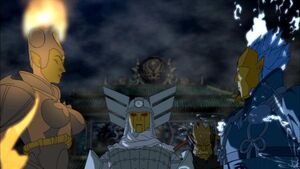 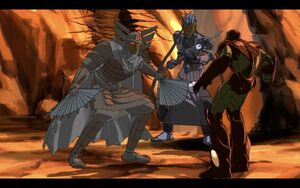 Air and Ice vs Iron Man 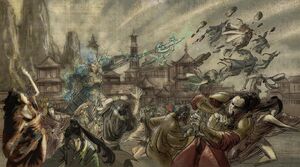 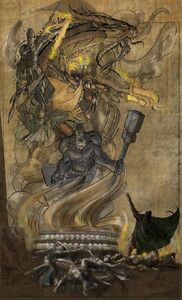 Elementals being created by The Mandarin 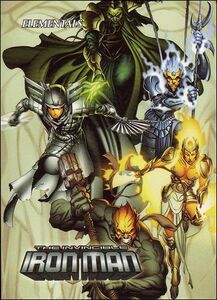 Elementals with The Mandarin 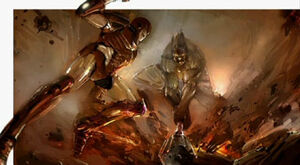 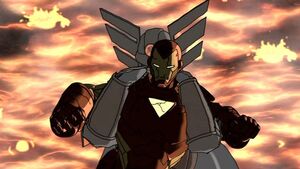