Your Highness (by Prime Minister Honest and Esdeath)

Ruler of The Empire (formerly)

Trying to lead others to greatness.

Maintain order and peace within the Empire and destroy both Night Raid and the Revolutionary Army (all failed).

The Emperor is a major antagonist of the Akame Ga Kill! manga/anime series.

He is the supreme ruler of the Empire, though everything he does is through the influence of Prime Minister Honest (the true ruler and mastermind behind the events).

The Emperor is a naive boy who wishes to lead his people to a great future. But unfortunately, due to the Honest's influence, he is immensely ignorant and dim do to the suffering of his people, and contributed to the collapse of the Empire which causes it's downfall in the end and his own death in being executed by Najenda.

He was voiced by Yo Taichi in the original Japanese version, and by Shannon Emerick in the English dubbed version.

The Emperor is a young boy with green hair and eyes. He wears a purple outfit with white boots and a blue mantle, as well as a large headdress. He also carries a golden scepter with a blue orb attached to it.

The Emperor is immensely naive, gullible, and blindly trusting to the Prime Minister, who is using him as a puppet to do whatever he wants. Constantly under the watchful gaze of his "most trusted adviser", the Emperor's perception of morality has become warped as he is incapable of discerning right from wrong, believing that all he does is for the good of the Empire. He obediently listens to Honest without question and asks for his approval in the decisions he has made, as shown when he sentenced a man to death for being against some of the decided political measures he had taken. His naive nature, makes him incapable of making decisions that benefit his country.

Shortly after activating Shikoutazer (the supreme teigu), Prime Minister Honest activates it's hidden trump card which brainwashes the Emperor and causes him to become extremely corrupt, utterly bloodthirsty and uncaring as not thinking and caring about the innocent people he killed in the process. This proves that The Emperor, while kind-hearted, is capable of murdering others who get in his way.

A few years ago before the series started, the Emperor won the succession to the throne of the Empire thanks to Honest's shrewd tactics, including killing his parents. Honest has been using him as a pawn and puppet ruler ever since that day and now.

In the end, he comes to realize (albeit too late to matter) how wrong he was and that instead of leading his people into peace and prosperity he had only caused them suffering with his gullibility and delusion. In his last day he declared that although he had failed as a leader, he still intends to face his end with honor. He faces his execution with repentance and dies with dignity. However, he dies tragically as a puppet as he lives as a puppet. To add to this insult, he never learned the fact that it was Honest who killed his parents.

Although the emperor is young and defenseless, he is in royal possession of Shikoutazer, the first and most powerful Teigu there is. The Teigu is a massive size armor that is designed to be controlled by the only emperor himself. Shikoutazer first appeared from beneath the palace after the Emperor summoned it as a final resort, after Night Raid broke into his palace and got past his imperial forces. The Teigu is capable of shooting energy beams that can cause explosions and is impervious to Tatsumi's attacks at first. Seemingly powerful, however, its chest is revealed to be its weak spot which Wave discovered and Tatsumi acknowledged to destroy. Also, Shikoutazer is shown to be not capable of withstanding the evolutionary phase of Tatsumi's armor, Incursio, as the Teigu gains new abilities and grows more powerful within its process. In the anime version, the Teigu is called Primus Imperator. 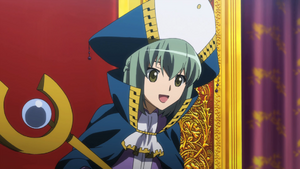 The Emperor in the anime.

The Emperor with the Prime Minister, Honest. 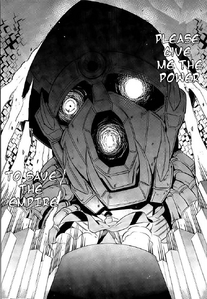 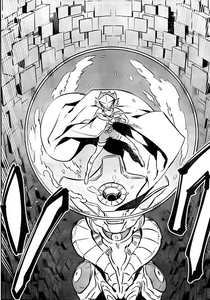 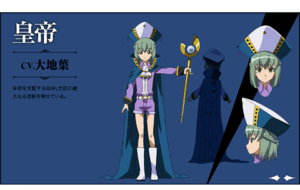 Anime design of the Emperor. 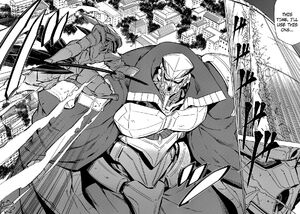 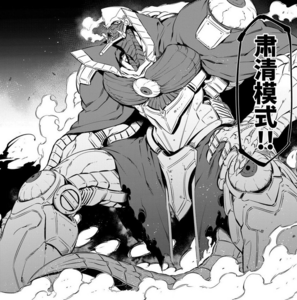 The Emperor grinning evilly after becoming corrupted and bloodthirsty. 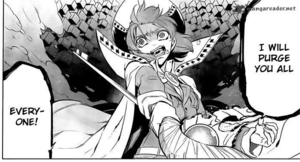 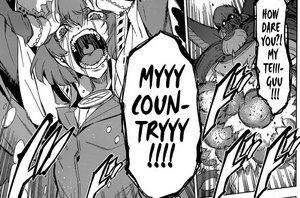 The Emperor defeated with Shikoutazer destroyed in the process. 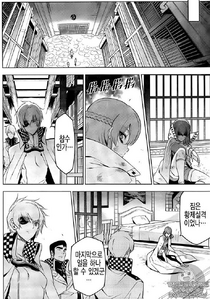 The Emperor imprisoned for his crimes before being executed (manga). 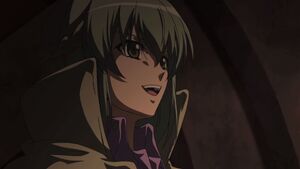 The Emperor ready to be executed for everything he has done (anime). 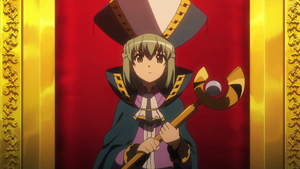 The Emperor
Add a photo to this gallery

Retrieved from "https://villains.fandom.com/wiki/The_Emperor_(Akame_Ga_Kill!)?oldid=4339294"
Community content is available under CC-BY-SA unless otherwise noted.