Maintain absolute power and control over the entire nation.

Subjugate and force the people into submission.
Destroy the Revolutionary Army and Night Raid.

The Empire is a tyrannical, corrupt kingdom and the main antagonist faction of the Akame Ga Kill! manga and anime series.

The Empire is a superpower that has lasted for 1,000 years, boasting vast territories and resources. Its capital city is an enormous palace-like metropolis, covering roughly 200,000 sq. kilometers, and is encircled on all sides by a huge wall. The capital's various districts are separated by large canals which trade ships run through. Beyond the capital the country seems to be mostly rural with an unknown number of cities and villages spread throughout. The exact size of the Empire itself has yet to be revealed. Three other countries border the Empire to the north, south, and west while the Empire's eastern boundary is the coastline of a great ocean.

At its founding, the Empire had nearly limitless resources and some of the best minds in the world, with the first emperor having absolute authority. At some point during this period, the emperor, wishing to insure that his nation would last forever, ordered the creation of the Teigu. These weapons greatly increased the power of the Empire’s military, and it is heavily implied that their introduction resulted in a great surge of imperial expansionism.

Several hundred years later, the Empire experienced a huge civil war. Little has been revealed about it, but it is known that almost half of the Teigu were lost during this conflict.

400 years before the current story, the emperor of that era decided to create his own Teigu. The weapons that were produced from this effort, however, were in no way a match for the Teigu and came to be called Shingu instead. The Shingu were then sealed away, and they are not known to have been used until the formation of the Assassination Squad.

The Empire's recent history is mainly one of decline. This is largely due to the ascension of the current Prime Minister, who cares only for his own pleasure. His time has been marked by an increase in government corruption, an economic recession, eroding public order, rampant poverty and great dissatisfaction amongst the people. As a result of the Prime Minister's excesses, there have been numerous uprisings from both inside and outside the Empire that have had to be put down by force. In addition there have been many defections from the Imperial military, including several generals, and this has led to the birth of the Revolutionary Army, a group dedicated to the Empire's total overthrow with Night Raid.

The Empire has a very diverse culture due to its large size. Its citizens range from nomadic clans to small village communities to world-wizened city dwellers. However, due to the corrupt government, there have been multiple uprisings and great civil unrest. The villages and towns suffer from heavy taxation and many have been unable to buy enough food, resulting in widespread shortages in the remote areas of the Empire. This has forced many country-living citizens to move to the capital to seek money to help their village, only to sometimes find death (or worse) because of the high crime rate. The arrest, torture, and public execution of the Prime Minister's political enemies is also not uncommon, which leads to a general atmosphere of fear.

Slavery is common in the Empire, but slaves are able to become free through currently unknown means. Slaves have a mark branded on them to show that they are slaves. Due to the high tax rates imposed on the villages of the empire, there have been many parents that have sold their children into slavery for money or a better life.

As the name implies, The Empire is an absolute monarchy where the Emperor's word is law. The nation is not just run by him alone, however, as he has the Prime Minister and various advisers to administrate many territories and regions. The current Emperor, Makoto, is only a child and, having assumed the throne at a rather young age, he is more of a figurehead than a true ruler. Because of this, many of his officials are doing as they please, including the newest Prime Minister.

The Empire has a strong military because of having one navy unit and three ground armies each commanded by a General. A sub-faction of the Military is the Imperial Guard/Defense Forces, which is commanded by Grand General Budo, who is also the head of the entire army in the Empire. There are many forts and castles that surround the outer and inner parts of country. The soldiers in the army mostly use swords, spears and such, although there are some special squads well equipped with fine armor and firearms called "Gun Squadrons". They also have trained a number of beasts to fight for them. There is a also a special unit named the Jaegers, created for the purpose of hunting down Night Raid and to maintain security in the capital. In light of the deaths of several members of the Jaegars, a new secret police group headed by the Prime minister's son, Syura, called Wild Hunt was established to enforce "peace" in the capital.

General Budo, a former Totalitarian, has a personal guard stationed in the Castle. Esdeath herself regards these men with the greatest respect due to their high skill and fearlessness. However, the Empire's greatest military advantage is the 48 weapons relics know as Teigu. Historically, they have granted the Empire's military a major advantage over all other armies.

Little is known about diplomatic relations between the Empire and neighboring countries. However, due to the fact that the empire wages war on various countries that may pose a threat to them, later may mean that other nations live in fear of the empire.

Mine reveals that the Empire's relations with the Western countries are very poor, to the extent that they formed an alliance with the Revolutionary Army. 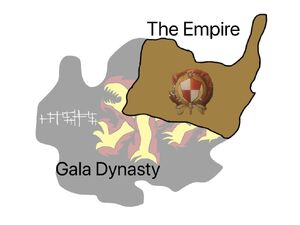 |The Empire compared to Gala. 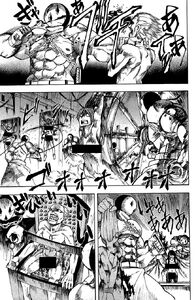 The Empire tortures their victims and slaves.
Add a photo to this gallery

Retrieved from "https://villains.fandom.com/wiki/The_Empire_(Akame_Ga_Kill!)?oldid=3521557"
Community content is available under CC-BY-SA unless otherwise noted.