Gate: Thus The JSDF Fought There

Retain dominion over their territory
Conquer Japan (both failed)

Hegemonic Imperialists
The Empire is a Roman-like civilization who are one of the primary antagonists of the manga Gate: Thus the JSDF Fought There. The Empire is the most powerful country in a parallel fantasy world, having conquered much of the continent it sits on. However, comparing to the JSDF and modern military standard on Earth, they are extremely inferior to the might of the modern military of the JSDF and others nations on Earth.

The empire is ruled by an emperor, Molt Sol Augustus as for first contact with the JSDF, who possesses the final authority on most, if not all matters of state, however, much of the running of the state is left to the Imperial Senate. Below the Imperial government are lesser kings, dukes, chieftains, and other nobles who pledge loyalty to the Emperor and provide taxes and auxiliary troops in time of war, but are allowed to preside over most matters of government. While the Emperor wields substantial political power, his decisions are influenced by the Senate and his vassals, as, much like in the real Roman Empire, they may plot to overthrow the Emperor if they become discontented with his rule. Molt Sol Augustus, realizing the power of the JSDF, ordered many of his rival vassals to attack the JSDF foothold at Alnus Hill, fully expecting them to be slaughtered by the modern arsenal of the JSDF.

Much like the political system, the Empire's military is similar to that of the real-world Roman Empire, with the primary military force composed of legions of troops armed with a rectangular shield, spears, and short sword similar to the Roman gladius. The Imperial Army also has a large number of auxiliaries armed with cruder weapons and armor, many of whom are other "fantasy" races, including beings similar to orcs or trolls. In addition to infantry, archers, cavalry, siege engines, and dragon riders are also found within the Imperial ranks. While the society and military is based largely on the Roman empire, the Empire has a slightly more advanced technology level, roughly equivalent to that of the late Middle Ages. For instance, in addition to "Roman-like" weapons, the Imperial Army also is shown to have halberds, crossbows, and trebuchets. The Empire does not, however, have any sort of gunpowder-based weapon, and, until their defeat at the hands of the JSDF, had never encountered them.

Magic exists in the world of the Empire, and while magical creatures such as dragons are used, sorcerers or wizards are rarely employed in the military, and magic is generally inefficient. It is later revealed that this is in part due to the lack of understanding with regards to the forces they are manipulating, as a sorceress in training who befriends the JSDF, Lelei La Lalena literally casts some of the most powerful fire magic ever after simply reading about combustion in a high school physics text book.

Due to their inferior level of technology, they often use human wave attack agains the JSDF, which often resulting in mass slaughter.

Little is known about the history of the empire prior to its encounter with the Japanese Self Defense Force after its army attempted to invade modern-day Japan. Only broad details are known of its early history - if the Imperial calendar begins at the Empire's founding, then the Empire is 687 years old at the time of GATE. This places its founding at some point in the early 1300's of the Gregorian calendar used on Earth. For an unknown amount of time, the Empire has run on a plunder economy, sustaining itself by conquering new territories and ruthlessly exploiting their resources and inhabitants.

One known event is the conquest of a race of people similar to rabbit-eared "kemenomimi", in which Crown Prince Zorzal led the invasion of their territory, and took their queen, Tyuule captive. Tyuule agreed to serve Zorzal if she spared the lives of her people, however, instead, Zorzal forced her to become his sex slave and massacred her people anyway.

The Empire's met its downfall when they created or found (it is not clear which) a magic portal which sent them into the Ginza shopping district of modern-day Tokyo. The Imperial Army initially killed no more than a few hundred Japanese civilians and took no more than a few dozen into slavery. The Tokyo Police, commanded by off-duty Japanese Self Defense Force Lieutenant Youji Itami, evacuated civilians into the (Japanese) Imperial Palace, and held off the Imperial (as in the The Empire) army using handguns, submachine guns, and riot shields, until the Japanese Self Defense Force arrived and easily defeated the Imperial army with the far superior firepower of their modern weaponry. The JSDF then counterattacked through the portal, and wiped out an Imperial army of over one-hundred thousand using machine guns, tanks, Cobra helicopter gunships, and other modern armaments.

The empire was quickly force to surrender in the face of this unstoppable power, and Lt. Youji Itami was sent to explore the fantasy world, designated as "The Special Region". The Empire, for its part, was shocked by the lenient terms of surrender given by the Japanese, expecting to be slaughtered or taken into slavery, the concept of basic human rights not existing at their level of society. It was not until somewhat later that it was discovered the Empire had taken Japanese slaves. While providing relief for an earthquake that hit the Imperial capital, Zorzal Caesar reveals he has a Japanese woman as a sex slave. This results in a Lt. Itami ordering a particularly bloodthirsty member of his unit, a female soldier named Shino Kuribayashi to beat the locations of the other slaves out of Zorzal. Zorzal orders his guards to kill the JSDF soldiers, but they are easily dispatched with assault rifle and bayonets.

After liberating Zorzal's sex slaves, the JSDF makes a demand for the return of all Japanese citizens enslaved in the empire, as well as delivers a warning: evacuate the Imperial Senate. Later that day, the a JSDF F-4 fighter jet drops a laser-guided bomb on the Senate, completely destroying it as a demonstration of their power. 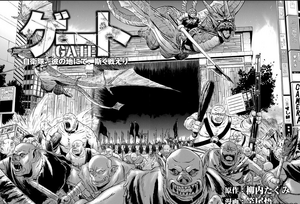 The Empire invading Ginza in the manga. 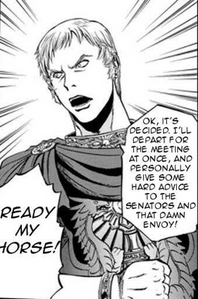 Zorzal Caesar, the crown prince of the Empire. 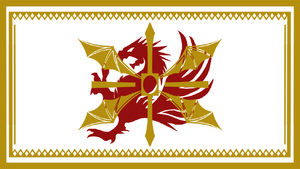 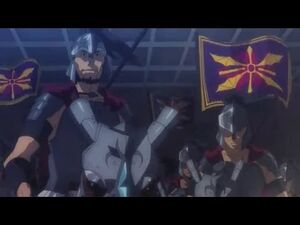 Soldiers of the Empire.
Add a photo to this gallery
Retrieved from "https://villains.fandom.com/wiki/The_Empire_(Gate)?oldid=4209016"
Community content is available under CC-BY-SA unless otherwise noted.