NOTE: This article is about the incarnation of the Enchantress from the DC Extended Universe. The mainstream version can be found here: The Enchantress (DC).

Turning humans into her soldiers.

Use a weapon of mass destruction in order to reclaim her control over the Earth and to be worshipped by the human race again (failed).
Kill anyone who will dare to oppose her (failed).

The Enchantress is the main antagonist of the 2016 Academy Award-winning superhero film Suicide Squad, the third installment of the DC Extended Universe.

She is a powerful sorceress that is possessing archaeologist Dr. June Moone, who is also the love interest for Colonel Richard "Rick" Flag Jr. She seeks to create a weapon of mass destruction to reclaim the world for her and her brother, Incubus.

She was portrayed by Cara Delevingne in her first villainous role.

The Enchantress was an entity from another dimension that was once worshiped by an unspecified South American culture, along with her brother Incubus. The two had become trapped in totems and left in a temple for nearly 7 thousand years. Originally a thrill seeking youth, Dr. June Moone, an archaeologist, is possessed by the spirit of the Enchantress whilst excavating the ruined temple and destroying her totem.

Eventually located by Amanda Waller and monitored by Colonel Richard Flag, June enters a relationship with the Colonel and is recruited into the 'Task Force X', after the heart of the Enchantress is discovered. With the heart, Amanda is able to maintain control over Enchantress.

Following the supposed death of Superman, Waller assembles the Suicide Squad (composed of Deadshot, Killer Croc, Harley Quinn, Katana, Captain Boomerang, El Diablo, and Slipknot). She approaches the government for approval by having the Enchantress to use her teleportation abilities to steal a highly-classified file detailing Iran's nuclear arsenal inventory. The government approve of this after receiving the file.

However, the Enchantress sets off in Midway City and finds the vial which contained the soul of her brother Incubus. She kills a businessman to use his body as a host for Incubus, who then attacked the Midway City subway, killing many people and destroying trains. When the army and police fail to stop Incubus' attacks, the Enchantress reveals her true colors by severing her ties with Waller, who then tries to kill her. However, the Enchantress is save when Incubus uses his power, which allowed her to create and raise an army of monsters. She then plans on creating a powerful weapon to eradicate humankind from the face of the Earth.

As El Diablo sacrifices himself to destroy Incubus, the rest of the Suicide Squad battle against the Enchantress, but they are no match for her. However, Harley manages to trick the Enchantress into letting her guard down by offering an allegiance with her, which allowed Harley to cut out the Enchantress' heart, which gets destroyed by Flag himself. As such, the Enchantress dies along with her powers, and June is finally freed from her curse. 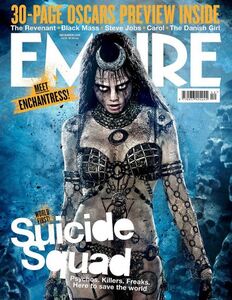 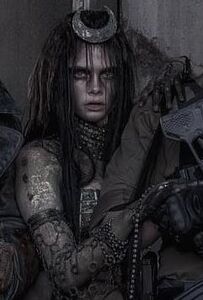 The Enchantress in a promo picture.
Add a photo to this gallery 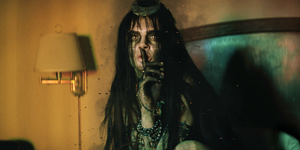 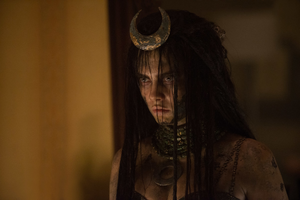 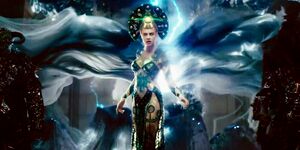 The Enchantress creating her army.

Promo art of the Echantress.
Add a photo to this gallery

Retrieved from "https://villains.fandom.com/wiki/The_Enchantress_(DC_Extended_Universe)?oldid=3444578"
Community content is available under CC-BY-SA unless otherwise noted.