Fred Krueger
Freddy Krueger
Himself (in the movie's end credits)

Fully escape into the real world by killing Heather Langenkamp.

Killing everyone in the real world.

The Entity is the titular main antagonist of the 1994 slasher film Wes Craven's New Nightmare who poses as Freddy Krueger in the late 20th century.

Like the film monster he posed as, he was portrayed by Robert Englund.

An evil demon from ancient times, The Entity scoured the world killing innocent people. Its one weakness was that its essence could be trapped in a story that allows evil to be depicted. After the stories die out, the Entity could escape back into our world by killing a gatekeeper.

After the first Nightmare on Elm Street film was made, the Entity became trapped in the film franchise. During its entrapment, it became fascinated with Freddy Krueger and took on his form. After Freddy was killed by his daughter in Freddy's Dead: The Final Nightmare, the film franchise ended and the Entity, now calling himself Freddy Krueger, entered the real world. However to fully escape, it needed to kill the gatekeeper, Heather Langenkamp. The reason Heather was the gatekeeper was because her character, Nancy Thompson was the first person to defeat Freddy. Despite taking Freddy's form, there were some differences. The Enity wore a black trenchcoat, had an organic-looking claw rather than a clawed glove, and was more demonic in appearance.

It started its attack by killing Charles Wilson and Terrance Feinstein, two special effects technicians working on the new Nightmare on Elm Street film by making a robotic claw. Heather saw the attack in a nightmare and was shocked when she learned of their deaths. The Entity then attacks Heather's husband, Chase, killing him and making it look like a car accident, though the claw marks on his torso made Heather suspicious. Heather talks to Robert Englund about seeing Freddy, but Freddy was scarier. Robert completed it by saying darker, more evil, indicating the Entity was affecting Englund as well. Heather then goes to Wes and Wes explains the new movie is needed to contain the entity but asks Heather to be Nancy one last time.

Heather asks Julie to make sure Dylan stays awake. Two nurses are able to drug Dylan despite Julie's best efforts. Dylan then sees the Entity behind Julie and the Entity then attacks Julie. During this time, the staff at the hospital were questioning Heather's sanity until several doctors see Julie floating in the air and eventually die on the ceiling from a broken neck.

Dylan sleepwalks to his home with Heather in pursuit. The Entity appears in the sky and lifts Dylan across a highway, putting him in danger. Heather gets hit by a car but was unharmed. The Entity then alters reality and makes Heather's home look like 1428 Elm Street and convince John Saxxon that he was Donald Thompson, Nancy's father. Heather called Donald "daddy" allowing the Entity to enter the real world. Heather enters Dylan's bed and finds sleeping pills. She gets a knife and takes the pills, entering the dream world.

Heather locates Wes' script for his movie and after reading it, learns he was writing about her life and there was no movie. Dylan appears behind Heather but the Entity attacks Heather. Heather grabs a snake and sticks it in the Entity's eye and smacks him. The Entity attacks again but Dylan grabs the knife and stabs the Entity in the leg. The Entity knocks out Heather and goes after Dylan in retaliation.

It shoots into the Entity's mouth and the two put the Entity fully into the furnace and lock him in. The two then open the furnace fully, setting the Entity on fire. The Entity shows his true form as a satanic creature and then explodes, destroying his lair. Heather and Dylan are able to escape into the real world.

Heather finds Wes' script and see the final page. In his own handwriting, famed director Wes Craven wrote in the final page of the script that thanks to Heather and Dylan's efforts, Freddy was back where he belongs. 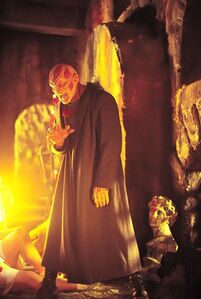 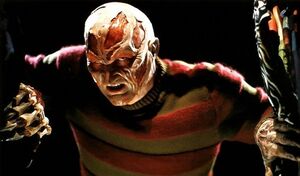 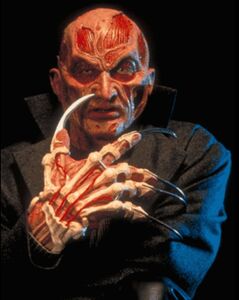 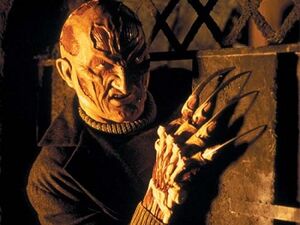 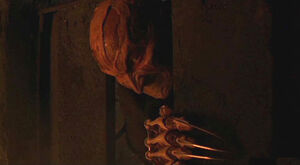 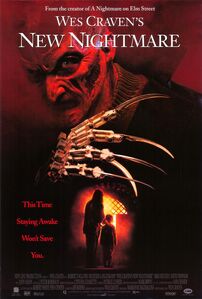 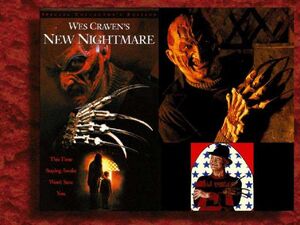 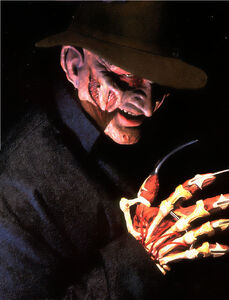 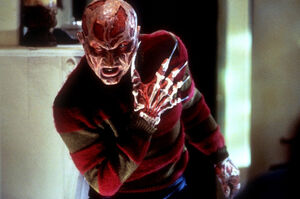 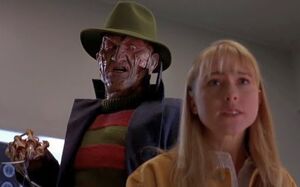 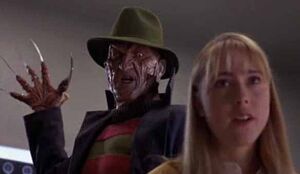 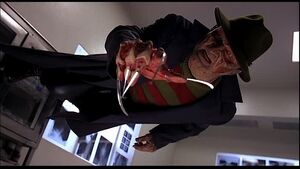 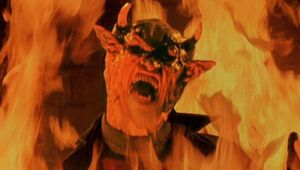 The Entity's true form.
Add a photo to this gallery

Retrieved from "https://villains.fandom.com/wiki/The_Entity_(Wes_Craven%27s_New_Nightmare)?oldid=3571025"
Community content is available under CC-BY-SA unless otherwise noted.