Snow White by the Grimm Brothers

Remain the fairest in the land.

Kill Snow White and others who are fairer than her (both failed).

The Evil Queen is the main antagonist of Snow White, a 1812 German fairytale written by the Brothers Grimm.

Various other versions of the characters appear in many subsequent adaptations and continuations of the fairytale. The Queen has also inspired several characters in the works that are not featuring Snow White. The moral of the story was to make children aware of the consequences of being an overly narcissistic, oppressive and prideful tyrant.

In the 1987 movie, she was played by the late Diana Rigg.

After deciding to rid of Snow White, the Queen orders her huntsman to take the princess into the forest and kill her. She asks him to bring back the girl's lungs and liver as proof that she is dead. However, the huntsman takes pity on Snow White and instead, brings the Queen the lungs and liver of a boar. The Queen then eats what she believes is Snow White's organs. While questioning her magic mirror, the Queen discovers that Snow White has survived. She uses witchcraft to take the disguise of an old peddler woman, because she intends to kill the girl herself. She visits the dwarfs' house and sells Snow White laces for a corset. The Queen intentionally laces the corset too tight in an attempt to asphyxiate the girl.

When that fails, she returns as a different old woman and tricks Snow White into using a poisoned comb. When the comb fails to kill her, she visits again as a farmer's wife and gives Snow White a poisoned apple. She dies soon afterwards and is buried in a glass coffin. One day, a handsome Prince buys the coffin and orders his men to carry it and along the way, they stumble over branches, which causes a piece of the poisoned apple to come out from Snow White's throat, reviving her. Snow White and the Prince reveal the Queen's true nature and invite her to their wedding; where, as punishment, she is forced to put on red-hot iron shoes and "dance" until she is dead.

The Queen's origins can be traced to the character of Silver-Tree, a jealous queen who threatens her daughter in the Celtic oral tale Gold-Tree and Silver-Tree. In some Scottish versions of Snow White, a talking trout takes place of the Queen's mirror, who herself is again again Snow White’s biological mother rather than stepmother, the huntsman figure is Snow White's own father who is love with the Queen, and her fate is unresolved. The tale varies widely from country to country, with the Queen using various tricks against Snow White (for example, in Italy it would be a toxic comb, a contaminated cake, or a suffocating braid, depending on a version) demanding various forms of proof from the huntsman (like a bottle of blood stoopered with Snow White's toe in Spain, or Snow White's intestines and blood-soaked shirt in Italy). The Brothers Grimm collected the German fairy tale in their 1812 Kinder- und Hausmärchen ("Children's and Household Tales"). In the first edition of the Brothers Grimm story, the Queen is Snow White's biological mother, not stepmother. This detail is not included in subsequent versions, since 1819.

German scholar Karlheinz Bartels suggests that the folktale "Snow White" is based upon Maria Sophia Margaretha Catherina von Erthal, who was born in Lohr am Main in 1725. After the death of Maria Sophia's birth mother in 1741, her father Philipp Christoph remarried. Claudia Elisabeth von Reichenstein, the stepmother, was domineering and greatly favored the children from her first marriage. The Queen's iconic mirror, referred to as “The Talking Mirror”, can still be viewed today at Spessart Museum in the Lohr Castle, where Maria Sophia was born. The mirror was likely a gift from Philipp Christoph to Claudia Elisabeth. It was a product of the famous Lohr Mirror Manufacture (Kurmainzische Spiegelmanufaktur). The mirror “talked” predominantly in aphorisms. The upper right corner of “The Talking Mirror” even contains a clear reference to self-love (“Amour Propre”). Moreover, mirrors from Lohr were so elaborately worked that they were accorded the reputation of “always speaking the truth” and so they became a favorite gift at European crown and aristocratic courts.

The Queen in the Betty Boop short Snow White first tasks her mirror whos the fairest in the land, which her mirror tells her that Betty Boop is the fairest in the land. The Queen decides to send her guards Bimbo and Koko to go behead Betty. Koko and Bimbo are about to kill Betty, although they can not go through it and Betty runs away. Betty ends up getting stuck in a ice block, which is a ride away into the mystery cave. Bimbo and Koko follow into the cave as the evil Queen turns into a witch and follows them. She freezes all of the people and asks her mirror if she is the fairest, and the mirror says that she is. The Queen than turns into a monster as all of the heroes are brought back to there normal form but the Queen starts chasing them. Bimbo pulls on her tongue, turning her inside out defeating her. Betty, Koko, and Bimbo than celebrate.

Queen Grimhilde, usually known as the Evil Queen, the Wicked Queen or just the Queen, is the main antagonist in the 1937 animated Disney film, Snow White and the Seven Dwarfs. This version of the character is often referred to as Queen Grimhilde in Disney publications of the 1930s, and was voiced by the late Lucille La Verne. In the form of an old witch, the Queen falls to her death after poisoning Snow White. The Queen's design is inspired by the character of Queen Hash-a-Motep from the 1935 film She, portrayed by the late Helen Gahagan Douglas, and was also modeled in part on Princess Kriemhild in Fritz Lang's Die Nibelungen. The Queen ranks #10 in the American Film Institute's list of the 50 Best Movie Villains of All Time, the highest-ranked animated villain.

Lana Parilla plays the Evil Queen in Once Upon a Time. Regina is the daughter of Cora, the Queen of Hearts and the half sister of Zelena, the Wicked Witch of the West. Regina was abused by her mother emotionally who used magic on her. As a teenager she met a young girl named Snow White whose life she saved. A broken promise from Snow led to her true love being killed by her mother which resulted in the Evil Queen's hatred for Snow White and a forced marriage from Snow's father. Regina casts a curse in which all fairytale characters of the Enchanted Forest lose their happy endings and are sent to the real world where Regina is the mayor of a town called Storybrooke and everyone else is a citizen and they don't remember who they are where time is frozen. Regina eventually adopts a child who she names after her father Henry, however, what she doesn't know is that her adopted son is the grandchild of Snow White and Prince Charming.

Charlize Theron played the Queen in the 2012 adaptation of Snow White titled Snow White & the Huntsman. In this retelling of the original story, her name is Queen Ravenna. Ravenna is depicted as scheming and power-hungry as well as vain and egotistical. She kills the King on their wedding night, so her animosity toward Snow White is not rooted in competition for the King's favor. Rather, the Queen fears that Snow White will challenge her rule over the kingdom. Ravenna's obsession with power and beauty is explained by a reference to childhood trauma, in which her mother tells her that beauty is a weapon to be used for protection.

Julia Roberts portrayed the Evil Queen Clementianna in Mirror Mirror. It is revealed that the Queen used a love potion to make the King {Snow White's Father} to fall in love with her. She then spread rumors about a dark evil invading the land, forcing him to ride off and face it. She turns him into the beast and controls him by use of the twin moon shaped necklaces that they wear. However, she used up the love potion, and so has to use a puppy love potion when she wants Prince Alcott to marry her for his money. She also makes her reflection turn her servant Brighton into a cockroach for a day as punishment for not killing snow white, as well as using wooden puppets as poppet dolls in a voodoo style magic to try and kill the dwarves. Snow stops the puppets by slicing the strings, before any of the dwarves are killed. The Queen is stopped when Snow slicing off the necklace around the beasts neck when the Queen sends it after her, Clementianna ages rapidly, until, at the wedding ceremony, she tries to trick Snow into eating a poisoned apple, but Snow recognizes her, even as an old crone and makes her eat the apple causing the Mirror Realm to collapse and the Mirror to shatter. 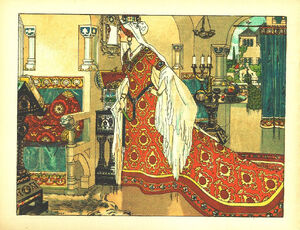 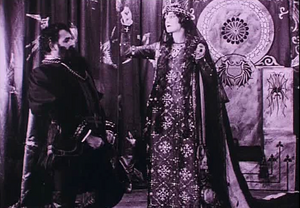 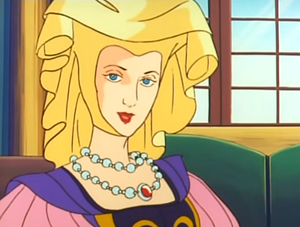 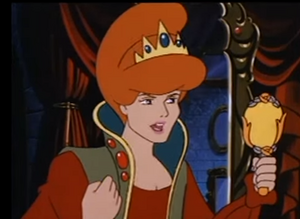 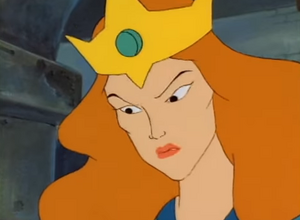 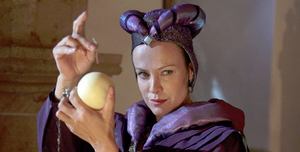 The Evil Queen in Schneewittchen. 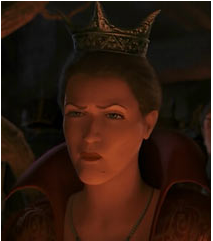 The Evil Queen in Shrek The Third. 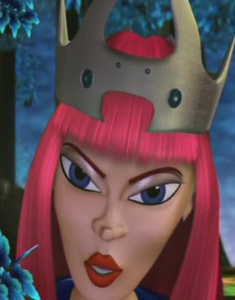 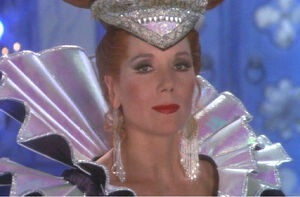 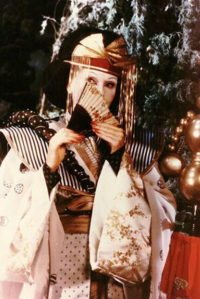 The Queen (1987) as an evil Japanese geisha, showing that she is racist.