Start a Wiki
The Queen, better known as The Evil Queen, is a fictional character and the main antagonist in "Snow White", a fairy tale recorded by the Brothers Grimm in the German countryside, although this and similar stories are also known to have existed in other countries.

The Queen is a vindictive stepmother that is obsessed with being most beautiful in the land. The young princess Snow White makes her envious, and so she concocts several plans to kill the young girl through the use of witchcraft. A driving force behind this is the Queen's Magic Mirror. Ultimately, in the traditional resolution of the story, the Queen is grotesquely executed in the end. The original tale is a lesson for young children against narcissism and pride.

Various other versions of the characters appear in many subsequent adaptations and continuations of the fairy tale. In these, she is sometimes portrayed more sympathetically, or even becomes a positive character. A particularly notable version is Disney's version, sometimes known as Queen Grimhilde. The Queen has also inspired several characters in the works that are not featuring Snow White.

After deciding to rid of Snow White, the Queen orders her huntsman to take the princess into the forest and kill her. She asks him to bring back the girl's lungs and liver as proof that she is dead. However, the huntsman takes pity on Snow White and instead, brings the Queen the lungs and liver of a boar. The Queen then eats what she believes is Snow White's organs. While questioning her magic mirror, the Queen discovers that Snow White has survived. She uses witchcraft to take the disguise of an old peddler woman, because she intends to kill the girl herself. She visits the dwarfs' house and sells Snow White laces for a corset. The Queen intentionally laces the corset too tight in an attempt to asphyxiate the girl. When that fails, she returns as a different old woman and tricks Snow White into using a poisoned comb. When the comb fails to kill her, she visits again as a farmer's wife and gives Snow White a poisoned apple. Snow White and the Prince reveal the Queen's true nature and invite her to their wedding; where, as punishment, she is forced to put on red-hot iron shoes and "dance" until she is dead

The Queen's origins can be traced to the character of Silver-Tree, a jealous queen who threatens her daughter in the Celtic oral tale Gold-Tree and Silver-Tree. In some Scottish versions of Snow White, a talking trout takes place of the Queen's mirror, who herself is again again Snow White’s biological mother rather than stepmother, the huntsman figure is Snow White’s own father who is love with the Queen, and her fate is unresolved. The tale varies widely from country to country, with the Queen using various tricks against Snow White (for example, in Italy it would be a toxic comb, a contaminated cake, or a suffocating braid, depending on a version) demanding various forms of proof from the huntsman (like a bottle of blood stoopered with Snow White's toe in Spain, or Snow White's intestines and blood-soaked shirt in Italy). The Brothers Grimm collected the German fairy tale in their 1812 Kinder- und Hausmärchen ("Children's and Household Tales"). In the first edition of the Brothers Grimm story, the Queen is Snow White's biological mother, not stepmother. This detail is not included in subsequent versions, since 1819.

German scholar Karlheinz Bartels suggests that the folk tale "Snow White" is based upon Maria Sophia Margaretha Catherina von Erthal, who was born in Lohr am Main in 1725. After the death of Maria Sophia's birth mother in 1741, her father Philipp Christoph remarried. Claudia Elisabeth von Reichenstein, the stepmother, was domineering and greatly favored the children from her first marriage. The Queen's iconic mirror, referred to as “The Talking Mirror,” can still be viewed today at Spessart Museum in the Lohr Castle, where Maria Sophia was born. The mirror was likely a gift from Philipp Christoph to Claudia Elisabeth. It was a product of the famous Lohr Mirror Manufacture (Kurmainzische Spiegelmanufaktur). The mirror “talked” predominantly in aphorisms. The upper right corner of “The Talking Mirror” even contains a clear reference to self-love (“Amour Propre”). Moreover, mirrors from Lohr were so elaborately worked that they were accorded the reputation of “always speaking the truth” and so they became a favorite gift at European crown and aristocratic courts.

The Queen, usually known as the Evil Queen or the Wicked Queen, is the villain in the 1937 Disney animated film Snow White and the Seven Dwarfs. This version of the character is often referred to as Queen Grimhilde in Disney publications of the 1930s, and is voiced by Lucille La Verne. The Queen, in the form of an old witch, falls to her death after poisoning Snow White. The Queen's design is inspired by the character of Queen Hash-a-Motep from the 1935 film She, played by Helen Gahagan, and was also modeled in part on Princess Kriemhild in Fritz Lang's Die Nibelungen. The Queen ranks #10 in the American Film Institute's list of the 50 Best Movie Villains of All Time, the highest-ranked animated villain.

Charlize Theron played the Queen in the 2012 adaptation of Snow White titled Snow White & the Huntsman. In this retelling of the original story, her name is Queen Ravenna. Ravenna is depicted as scheming and power-hungry as well as vain. She kills the King on their wedding night, so her animosity toward Snow White is not rooted in competition for the King's favor. Rather, the Queen fears that Snow White will challenge her rule over the kingdom. Ravenna's obsession with power and beauty is explained by a reference to childhood trauma, in which her mother tells her that beauty is a weapon to be used for protection.

Evil queen of Once upon a time 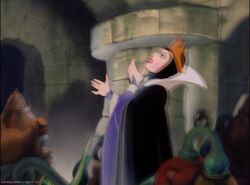 Grimhilde drinks the potion and starts to transform. 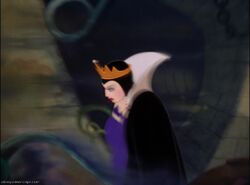 Start of Grimhilde's transformation from young, attractive, unbearably beautiful and insanely sexy to old and ugly. 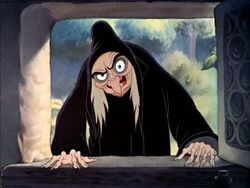 Grimhilde as an old lady.

The Evil Queen from "Once Upon a Time" 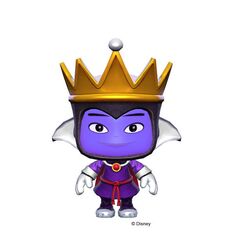 The Evil Queen in Snow White and the Huntsman 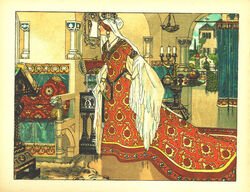 Add a photo to this gallery
Retrieved from "https://villains.fandom.com/wiki/The_Evil_Queen?oldid=1107920"
Community content is available under CC-BY-SA unless otherwise noted.