My Master (by Megatron)
The Original Decepticon (by Jetfire)

Renegade member of the Seven Primes

Resting in the Nemesis.

Kill Optimus Prime and all of the Autobots.

Wipe out humanity by destroying the Sun and plunging Earth into darkness.
Take over the entire universe (all failed).

Originally one of the original Primes, the Fallen went rogue and founded the Decepticons, and became the master of Megatron, seeking to rule the universe and wipe out both the Autobots and the human race.

He was voiced by Tony Todd, who also played Candyman, Luther Thompson in the third season of Scream, Zoom in The Flash TV series, Dreadwing in Transformers: Prime, Captain Darrow in The Rock, Grange in The Crow, and Shadow in Shadow: Dead Riot.

As revealed in Defiance, The Fallen was among the Dynasty of Primes, the first Cybertronians created by the Allspark. The Primes kept the Allspark charged with the power of stars. The Fallen believed the Allspark secretly communicated with him, anointing him it's chosen one. The Allspark created lesser beings to aid the Primes, including the Seekers and the Constructicons. The Primes vowed not to destroy stars with life, but the Fallen disagreed, and believed the energy should be taken regardless. He started to believe the Primes compassion would doom their race, and began to think evil thoughts. He began to believe he should get rid of the Primes, and have the Allspark's power for himself.

Over time, the Fallen began recruiting others to his side.The Fallen would deceive Jetfire, his most trusted Seeker, into unwittingly harvesting suns with life, reporting that there was none to him. After the Fallen discovered another planet quickly, Jetfire began questioning him on this. His master became impressed that he dared seek answers from a Prime, and told him the rest of the Dynasty had betrayed Cybertron. Their practice got The Fallen and Jetfire into trouble with the other Primes, and the Fallen defended his actions, and assured his brothers he would not make this mistake again. After the trial he claimed to Jetfire the Primes' refusal to sacrifice life to save their own planet would be its downfall, and that an army, called the Decepticons, had to be readied in case the Primes betrayed them all.

The Fallen attempted to build his own personal Star Harvester, with a counterfeit Matrix he had constructed. The unstable Star Harvester exploded, and infused the Fallen with unimaginable power. He travelled to many worlds, killing their inhabitants, and assimilating their technology, leaving dry husks in his wake. The Fallen evolved, and readied himself for his inevitable battle with his brothers. To bait his brothers, the Fallen and his army created a Star Harvester on Earth, an inhabited planet. Knowing either his brothers would take action (as he was prepared to kill them all) or would remain in limbo, he would win. Jetfire finally turned against his master, just as the remaining Primes arrived, falling into the traitor's trap. The Fallen warped Jetfire and his other underlings away and faced his brothers alone.

The Primes did not expect the Fallen's power, as he had become "so much more" than them. Using weapons stockpiled in personal dimension portals, The Fallen successfully killed the majority of his brothers. Only one remained, Prima, his greatest rival, who warped from location to location, with the Fallen following him. He believed Prima was simply fleeing, but in reality it was a trick. While the Fallen was exhausted from the teleportation, Prima gathered the energy of his bretheren, and banished him into a sarcophagus and the Fallen was trapped in another dimension, where he crashed into a desolate landscape, swearing revenge.

After thousands of years, long after the Dynasty of Primes passed into myth, the Fallen's sarcophagus was unearthed in modern day Cybertron, and brought to the chambers of Lord High protector Megatron. Sensing someone he could manipulate, the Fallen reached out to Megatron, filling him with a new resolve to destroy those who sought out the AllSpark. In the aftermath of Megatron's battle against a band of aliens seeking the AllSpark, The Fallen convinced him to seize control of Cybertron to make way for The Fallen's return. He also told him that Optimus sought the AllSpark for himself, and Megatron decided that Optimus and his followers deserved to be killed for this transgression.

The Fallen also ordered Megatron to build a space cruiser to seek out the Matrix. As the ship's construction came to an end, The Fallen told Megatron of his origin and his plans regarding Earth's harvester. The Fallen ordered Megatron to put his sarcophagus on the ship and then stay behind to fight Optimus's forces and safeguard the AllSpark. Soundwave and a majority of Decepticons crewed the ship. Meanwhile, the civil war between the Autobots and Megatron's Decepticons eventually led to the AllSpark being launched into space.

The Nemesis came across the AllSpark's energon signature. The Fallen spoke to Soundwave just as a ship crashed into the Nemesis, and disappeared once more through a portal. After landing the ship on a dead planet, The Fallen commanded Soundwave to pursue the ship though the portal. Later, Megatron found the abandoned Nemesis during his pursuit of the AllSpark. He spoke with The Fallen, who was furious that Megatron had taken a detour. He ordered him to resume the chase, confident that the Cube would guide them to the harvester.

Thousands of years later, Soundwave recovered a space bridge pillar from the Autobot ship. The Fallen informed Soundwave of Megatron's visit, and the Fallen used the pillar to warp space and time, leaving his prison. After Megatron's defeat in the first Movie, the AllSpark was reduced to a fragment.

Two years later, Megatron was resurrected by the Constructicons and returned to the massive Decepticon starship, The Nemesis. There, Megatron met with Starscream and then proceeding to reunite with his ancient master. The Fallen told Megatron that the All Spark was merely a vessel for the power it contained and was now in the mind of Sam Witwicky. Megatron returned to Earth and captured Sam, but could not receive the information he needed when Optimus Prime arrived.

After a long battle, Optimus successfully killed Grindor but was killed himself by Megatron. Feeling pleased and confident at the last Prime's death, The Fallen ordered a full-scale Decepticon invasion of Earth. The Fallen himself led a group of Decepticons in the landing and the destroying of an aircraft carrier. Through the Decepticon Soundwave, The Fallen appeared on all of the earth's televised devices, demanding that the "human hive" hand Sam Witwicky over to the Decepticons, or be destroyed. This caused Sam Witwicky and his close friends to be labeled as international fugitives, and the Decepticons traveled to Egypt to prepare to activate the long-lost Sun Harvester.

Instead of turning over Sam, the Autobots and N.E.S.T. traveled to Egypt with the body of Optimus Prime. Sam, his friends, and a few Autobots (including Mudflap, Skids, and Bumblebee) are transported to Egypt by Jetfire to find the Tomb of the Primes and the Matrix of Leadership to resurrect Optimus. The U.S. military and Autobots engaged in a full-scale battle outside of Cairo. To battle them, the Fallen ordered more Decepticons to land on Earth and attack them and stop Sam from getting to Optimus.

During the battle, Megatron deployed the combination of all the Constructicons, Devastator to destroy the pyramid surrounding the Solar Harvester, but in the process, he was destroyed by a shot from the rail gun of a nearby destroyer ship under the direction of Seymour Simmons. In the chaos of Sam and Mikaela doing their best to reach Optimus, Megatron fired a rocket at Sam's feet, knocking him unconscious. Receiving a vision of the other Primes through the matrix, the Matrix was reformed and Sam revived. Sam then revived Optimus, but the Fallen teleported to their location and stunned all of the human soldiers and Autobots nearby. He stole the Matrix from Optimus's chest and teleported back into the skies.

The Fallen warped over to the Solar Harvester where Megatron awaited his master and activated it, mockingly saying that his brother Primes would never be able to stop him from his ambition. As the countdown began, the U.S. Military acted quickly to prevent the destruction of Earth. The military fired tank missiles and rocket propelled grenades at the pyramids, which barely missed hitting The Fallen and Megatron. Using his telekinetic powers, The Fallen pulled all of the soldiers and tanks up to the top of the pyramid, then dropped them out of midair to their destruction, killing them. Seeing that he had to make the ultimate sacrifice, Jetfire offered Optimus his body parts and spark power, making him extremely powerful with flight capabilities. The Fallen pulled several rocks up to the skies to take out incoming aircraft, but Optimus dodged them, knocked Megatron off the pyramid, and tackled the Fallen. In midair, he fired a rocket which destroyed the Solar Harvester. Wrestling each other in midair, they landed in a nearby village.

Enraged, the Fallen commanded Optimus to join his brothers in death and they battled. The two seemed to be evenly matched until Megatron intervened and attacked Optimus from above. Optimus easily overpowered Megatron, blasting off half of his face and sending him flying through a nearby stone wall. The Fallen re-engaged Optimus, managing to rip off his sword and one of his rocket thrusters, using it to strike Prime in the face. The Fallen then attempted to stab Prime with his spear, but Optimus parried the blow and impale the Fallen through the shoulder with his own weapon. He then demanded the Fallen's face and tore it off with the damaged spear. Realizing that he was losing, the Fallen tried to flee, but Optimus ripped out his spark and crushed it, finally killing him. Horrified at his master's demise, Megatron (taking over as the new leader of the Decepticons) swore vengeance and fled with Starscream.

The Fallen voiced by James Arnold Taylor appears in the official game adaptation of the film Transformers: Revenge of the Fallen. He is not a playable character, but is the final boss of both campaigns, except in the Nintendo DS versions where the final boss is Optimus Prime or Megatron.

The Fallen makes an appearance in HISHE's parody of Transformers: Revenge of the Fallen. He is first seen having a conversation with his apprentice Megatron, who is questioning him that if he (Fallen) can only be beaten by a Prime & he (Megatron) just killed Optimus Prime earlier then that technically makes him more powerful than the Fallen. Unable to answer, a humiliated Fallen lied that it isn't & changes the topic of taking revenge on Earth & the Autobots while claiming he is still the leader of the Decepticons. Megatron realizes his master is lying & using him so he left, with the Fallen calling out "Oh, come on man!!". The Fallen is instead killed by the same experimental railgun that (was supposed to have) killed Devastator, who is just shown slacking off. 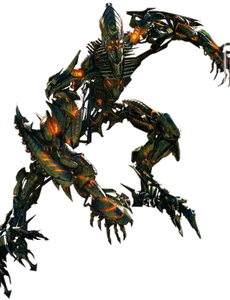 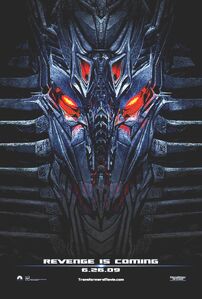 The Fallen in a promotional shot for Transformer: Revenge of the Fallen. 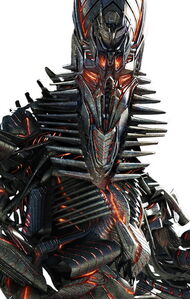 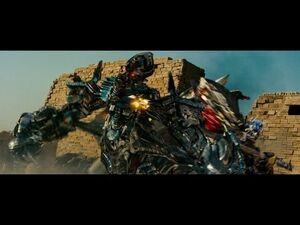 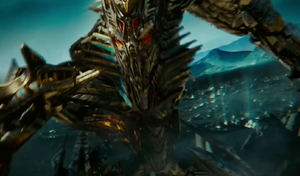 The Fallen reveals the existence of Transformers on Earth and warns the human race on TV to surrender Sam Witwicky or every city on Earth will be destroyed.

Optimus kills the Fallen, ripping out his spark and crushing it. 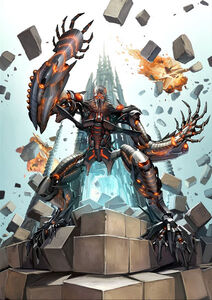 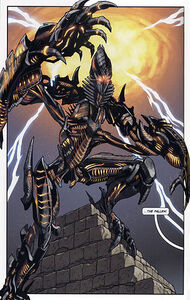 Fallen in the comics. 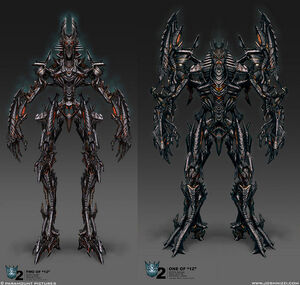 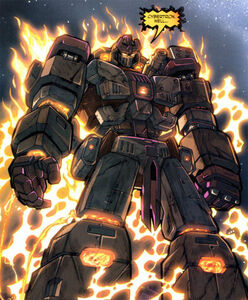 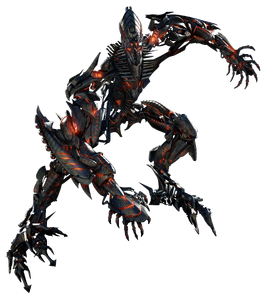 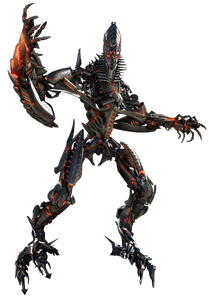 Retrieved from "https://villains.fandom.com/wiki/The_Fallen_(Transformers)?oldid=3838105"
Community content is available under CC-BY-SA unless otherwise noted.