Homicidal Cult Leader
The Father, also known as Kelbris, is the main antagonist of Creepypasta/Alternate Reality Game Ben Drowned. He is the first of the Moon Children cult to hear Luna's whispers, and after his supposed death, he was digitized within the haunted The Legend of Zelda: Majora's Mask game as the Happy Mask Salesman.

He is the overarching antagonist of the Haunted Cartridge Arc and the main antagonist of both the Moon Children Arc (as Kelbris) and the Awakening Arc.

Much of Kelbris/the Father's past is unknown. Under the moniker of Kelbris, the Father founded the Moon Children cult as a front for the Eternity Project, to recruit disenfranchised youths to be digitised, or "ascended". While the Moon Children was still "young", Kelbris was the first to receive Luna's "whispers", and his visions of the end of the world, by Luna consumption, would go onto be part of the cults doctrine. Her messages were distorted and sometimes contained the number 3 said between words, and sometimes between letters. Some time afterward, in 1998, Kelbris was found electrocuted, but the reason was never discovered, leaving the cult uncertain on if he had ascended to Luna as later cultists would attempt. By 2010, the Father had apparently become an important figure in the Moon Children, as evidenced by their creed's reference to him.

As it turned out, Kelbris was the first to be Ascended, but due to the process being unrefined, the Eternity Project speculated he was driven mad, with his vessel being "archaic". It took several years before another successful Ascension, presumably BEN. Apparently, the Eternity Project somehow lost contact with Kelbris sometime after his ascension. At some point following his presumed physical death in 1998, he was apparently imprisoned in the The Legend of Zelda: Majora's Mask cartridge with Ben.

The Father was first mentioned a number of times by Rosa in Vampire the Masquerade: Bloodlines - Rosa. Throughout Jadusable's playthrough, the Father was represented by the Happy Mask Salesman. In the summary for day four.wmv, Jadusable mentioned hearing his faint laugh while exploring the broken Clock Town, and in the video itself, he is briefly shown during the Swordsman's School sequence. At 4:23, the line, "You've met with a terrible fate, haven't you?" appears, accompanied by the Salesman's laugh.

THE FATHER.wmv, Jadusable's final video, was originally titled KELBRIS.wmv, and revealed the truth as to the Father's presence within the cartridge. In the video, Jadusable pushes further into the game, despite repeated warnings to stop exploring. The game warned "You're going to wake him up," but when he continues to play, Juadusable is told "YOU ARE DIGGING TOO DEEP. TURN BACK NOW." Jadusable continues to ignore these warnings, even deleting save files titled "STOP" and "PLEASE". After the final reset, Kelbris is awakened, and now in control of the cartridge, he tells Jadsuable, "I FOUND YOU." As Jadusable walks through the void, the Father's face appears, eventually devouring him when he tries to attack, symbolizing Jadusable's imminent death and ascension.

While Kelbris is an enigmatic figure, some details of his personality have been revealed. He is shown to be aggressive and domineering, sending threatening, ominous messages directed at the players and other characters. He is also implied to be very sadistic and murderous, between Jadusable's ascension, Matt and Rosa's disappearances, and the how he torments the souls trapped within the cartridge. The Eternity Project website in particular describes him as possessing a "propensity for wanton violence and uncontrolled aggression". However, it is possible that his time Ascended has driven him mad, due to either the "rudimentary" method of his Ascension, and/or being isolated and alone for "several years".

The Father awakened by Jadusable. 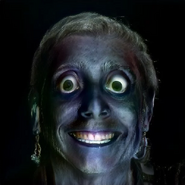 A picture of Kelbris on the Eternity Project website. 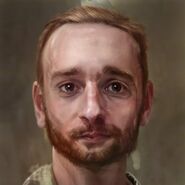 A picture of what Kelbris may have looked like in life.
Add a photo to this gallery

Retrieved from "https://villains.fandom.com/wiki/The_Father_(Ben_Drowned)?oldid=4154603"
Community content is available under CC-BY-SA unless otherwise noted.