Criminal
Sebastian Schmier, better known as The Ferret, is a recurring villain from the Austrian TV-show "Tom Turbo". Despite only appearing after it has been renamed from "Die heiße Spur", he can be considered to be one of the most recurring villains in the show, given that he, along with Fritz Fantom, Rudi Rat and Sigi Schlitzohr (despite they all appeared before the show was renamed) was appearing until the latest episodes. He is portrayed by Michael Schubert.

When the Ferret first appeared, he blackmails a zoo warden who is terrified of him as the Ferret knows his secret. He forces the warden to give him the keys to an underground place, where the safe cracker Hugo Hammer is digging a tunnel to a bank. After Tom is forced to help Hammer, the Ferret approaches them, thanking Hammer for doing the work for him. Hammer refuses to be robbed by the Ferret, claiming that he might do that to other idiots, but not him. During this, Tom rushes outside and locks them in. Later, the Ferret makes true of his threat and tells the zoo director that the warden has been in prison once. The warden then added that the Ferret tricked him, asking him to keep something that was stolen. The zoo director allows him to stay, regardless of what the Ferret told him.

The Ferret later committed various crimes, among them are:

Once, the Ferret hired the Witcher, an evil stage magician to sabotage a speed boat race in which the Ferret was partcicipating. To do so, the Witcher disguised himself as a salesman, opened a stand near a school ship and sold a chocolate to a boy in which he put werewolf elixir, planning to have the boy turn into a werewolf and scare everyone out of the school ship so he could use the viewing platform to sabotage the Ferret's competition by throwing balls which unfold into sticky fabrics, blocking the racers' view. When grabbed by Tom and some kid detectives, the Witcher accidentally threw the next ball at the Ferret, causing him to be disqualified and arrested.

Once, the Ferret allies himself with Rudi Rat to get the gold stolen and hidden by the Ferret's great-grandfather. With Rudi's technology, Ferret pretends to be a ghost to convince a girl, who is the 100th visitor of the castle and is therefore allowed to play the empress Sissi, which is why the alarm doesn't notice her, to find the gold. When she does, the Ferret steals it and runs away with Rudi, the two keeping one of the girls' classmates hostage. Turning into a wheelbarrow, Tom follows them accompanied by a gardner. They manage to snatch away the boy with the transformed Tom, and the girl takes away the gold. She then throws the stars belonging to her costume at them, causing Rudi and the Ferret to run.

Another time, the Ferret was hired by a mad scientist only known as the Greyface to steal zoo animals for the demonstration of his new chemical. When noticing that the zoo director's son Lorenz was hiding in his van, the Ferret forces him to help him to steal a monkey, controlling him with an electric collar given to him by the Greyface. Later, when the Greyface is about to demonstrate his invention to Gustav Geldsack and his secretary, Frau Kneiffer, Tom saves the boy and the monkey. Trying to get them, all four villains rush for the door, with Frau Kneifer accidentally being injected with the chemical that turns her into an aggressive and savage, chasing Geldsack, the Greyface and the Ferret who pound against the door.

In another episode, the Ferret is hired by the Witcher to power a magic mirror that creates evil doppelgängers by using a stationary bycicle. This causes the Ferret to pedal for so long he is later seen lying on the floor, lying on his back while keeping pedalling.

Later, the Ferret often works together with female partners, mostly a woman called Blondie. On one occasion, for example, they kidnap singers from a choir to retrieve the loot of five brothers who were both bank robbers and singers, only to realize that the brothers had installed a trap as the chest landed right on Blondie and the Ferret.

Another time, the Ferret tries to get the conterfeit money printed by Fritz Fantom and Sigi Schlitzohr, but he is unable to crack the door. He apparently then encounters Sigi off-screen, who is disguised as a druid at that time and who claims to put a curse on him. The Ferret later falls into a mud hole and gets mistaken for a mud monster. Encountering Tom, he begs him to open the door, claiming that animals were getting tortured behind it, and tells him to open it. He is later brought into the house of one of the kid detectives. However, when he hears that he has to tell the police what he saw, he tries to escape, but the blanket he's wrapped in causes him to fall.

Rudi Rat and the Ferret 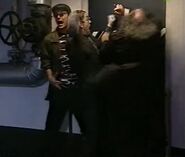 The Ferret, the Greyface and Gustav Geldsack begging to be let out when being chased by the savage-turned Frau Kneiffer.

The Ferret and Fritz Fantom laughing.