The Figure was a minor, yet memorable antagonist in the Doctor Who episode, "Listen."

It once appeared on top of Rupert Pink's bed at the West Country Children's Home in the mid-1990s. It did so when Clara Oswald took Rupert underneath his bed to assure him that there was nothing there.

The Twelfth Doctor told Rupert and Clara to turn their backs, in order to allow the figure to leave peacefully. He promised the figure that the three wouldn't look at it. When the figure left, it took Rupert's bed spread with it.

The Doctor came up with two possibilities for the creature's identity. The first possibility was that it was just one of Rupert's friends at the children's home playing a joke on him. Possibility two was that it wasn't. He later acknowledged to Clara that it was "entirely possible" that Danny was saved from what Clara referred to as "another kid in a bed spread". 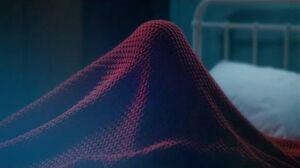