The Infinite Evil
The Taunter (once by Buffy)

Source and personification of evil

Taunting.
Causing people to kill themselves for it's amusement.

Possess all of humanity.

Destroy the slayer line and the Watcher's Council.
To become a corporeal being.

It is a unique and malicious entity that is the most powerful villain in the entire franchise; it is literally the root of all evil in the world, and older than time itself.

The First Evil appears to be the sum total of all that is evil, older than the Demons or even the Great Old Ones and far more ancient than humans, it has existed before the written word and trancends all reality and dimensions (at least those that appear in the Buffy universe) - it is suggested that it may even have been the very first entity to have existed as stories say that the First Evil lurked in the darkness long before the physical universe was even created and that it shall remain long after the universe ends - despite its seemingly massive power-level few have heard of it and even fewer actually believe it to exist. The only thing older than The First is The Seed of Wonder, the source of all magic in the universe.

The First Evil cannot affect the world on a physical level - only able to deceive, torment and manipulate others, having a deep understanding of human nature since it can copy the thoughts of all human beings who have died. It uses this knowledge to drive others to commit acts such as murder and suicide. Though it once expressed the desire to feel what it would be like to kill a human being by it's own hand, this lead to it coming up with a plan to either gain a physical body of its own or to possess all humanity through means of tipping the cosmic balance via their army overpowering humanity. The amulet that the senior partners gave Angel that he gave to Spike to use to destroy the Hellmouth. Destroying the Hellmouth caused the first evil powerless and go into dormant for the foreseeable future though likely to resurface eventually.

Its only true weakness is that it is unable to deal physical damage, being ghostlike in nature - it is however a master of manipulation and act through its many servants or any creature it may manage to trick into doing its bidding. 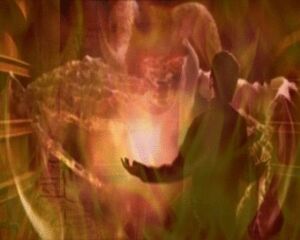 The First aka the First Evil. 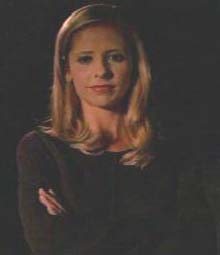 The First Evil in the form of Buffy Summers. 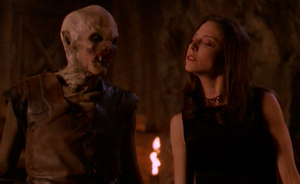 The First Evil in the form of Drusilla (right) with a Turok-Han vampire (left). 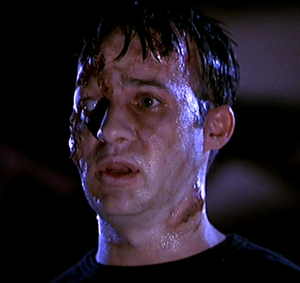 The First Evil in the form of a decaying Jonathan Levinson. 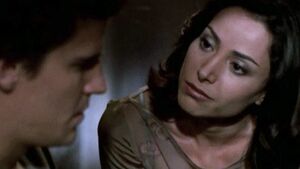 The First Evil in the form of one of Angelus's victims Jenny Calender (right), tormenting Angel, the heroic alter-ego of Angelus (left). 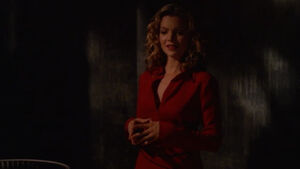 The First in the form of Glorificus. 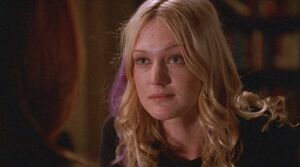 The First in the form of Cassie Newton