Barbarians of the Reach

Several camps and outposts across the Reach

Reacquisition of the Reach as their homeland, to the exclusion of all other cultures and peoples.

Xenophobic Barbarians
The Forsworn are a group of barbarians and savages in the video game The Elder Scrolls V: Skyrim. They are usually found within the Reach and will stop at nothing to retake it and it's capital, the city of Markarth.

The Forsworn have a long history, dating back to Red Eagle's time in the First Era. In 1E 1055, Empress Hestra of Cyrodiil attempted an invasion of the Reach. The old kings, however resisted. Some were killed while others were bribed to fall under the banner of the Alessian Empire. Her legions eventually arrived and envoys were sent to bargain for their surrender. Red Eagle refused to yield the freedom of his own people, but the elders who were afraid of being executed expelled him, and gladly accepted the Imperial yoke.

Despite being expelled from Sundered Hills, Red Eagle believed that the Reach should be free from Imperial oppression, and gathered an army of Reachmen loyal to himself. Under his command, they formed a resistance and successfully carried out multiple raids on Imperial forts and patrols throughout the Reach, including the Reachmen who betrayed them.

One night however, a cloaked stranger appeared and revealed herself to be a Hagraven. She approached Red Eagle and made him an offering to grant him great power. Her offering was to have him sacrifice his heart, will, and humanity to become a Briarheart. He gladly accepted, but it made him a spirit of vengeance, pitiless beyond remorse. It paid off however, as his Reachmen resistance increased in size and strength, and no one could stop them. Within 2 years, they successfully drove the Empire away from the Reach.

Unfortunately, despite his initial victory, Empress Hestra returned to the Reach, this time with an army even bigger than before. For 2 weeks, her generals laid siege to Red Eagle's stronghold until Red Eagle himself emerged. He armed himself with a fire-enchanted sword and slaughtered 1,000 Imperial soldiers before they eventually executed him.

Following the collapse of the Reman Empire, and the beginning of the Interregnum, the Reach was receded from the Empire. In the Second Era however, Hjalti Early-Beard (known as Tiber Septim) led a group of men and conquered Hroldan from the barbarians of the Reach in 2E 852. Later, he conquered the remainder of the Reach and founded the Septim Empire. The Third Era began shortly afterwards, and upon his death in 3E 38, he became Talos, the Ninth Divine.

When the Empire went to war against the Aldmeri Dominion in the Fourth Era, the Reachmen rebelled in the city of Markarth in 4E 174 and successfully drove the Nords out. For 2 whole years, they successfully ruled over the Reach as a peaceful independent kingdom.

Unfortunately, when the Great War ended in 4E 175, the Empire was forced by the Dominion to outlaw Talos worship. Ulfric Stormcloak heavily opposed this, and was desperate to re-gain control of the Reach. Hrolfdir, the Jarl of Markarth at the time, gladly accepted the aid of a Nord militia to re-gain Markarth in exchange for free Talos worship in the hopes that the Dominion wouldn't know about it. Ulfric led an assault on Markarth, and successfully re-took it.

Despite him successfully re-gaining full control over Markarth, some remaining Reachmen, outraged by the destruction of their kingdom and betrayal by the local Nords, fled into the surrounding hillsides and became the Forsworn, calling the event "The Markarth Incident". In addition, the Aldmeri Dominion found out about the offer for free Talos worship in Markarth and forced the Empire to have Ulfric Stormcloak and his men arrested, and they obeyed without question. According to Jarl Igmund, it was the founding day for the Stormcloak rebellion and where Skyrim's Civil War really began as well.

The Forsworn typically live in caves and outdoor camps. Some can even be found in Nordic Draugr ruins. Their armor usually has human skulls on the front and their weapons usually have jagged blades. Their helmets usually have horns sticking out, and their boots usually have feathers. Some members will dual-wield their weapons, while others will use magic instead. Their weapons and armor are unique, as they appear to have been made from bones and feathers, rather than metal. Their ranks include Foragers, Archers, Looters, Pillagers, Barbarians, Ravagers, Warlords, Shamans (women only), and Briarhearts (men only). They can also summon an Atronach or Hagraven to fight for them. A Briarheart will replace his own heart with a Briar Heart (potion ingredient). A summoning ritual can be seen at Bard's Leap Summit. If it is pickpocketed, then he will immediately die. If it is looted from his corpse, then his body will slightly increase in size. It occupies 0.5 carry weight, restores Magicka when eaten, and has a base value of 20 gold. It can also temporarily fortify Magicka, fortify damage reflected by blocking, and paralyze enemies. If the Dragonborn strikes it, then it will result in dealing extra damage. Their hideouts usually have walls with spikes sticking out on top.

The Forsworn will typically attack in groups, rather than only one member at a time. The soldiers will typically dual-wield their weapons and use power attacks when available. They can swing their weapons from side to side quickly, and can rotate themselves in the process if desired. The archers are accurate and aggressive, and can fire their bows quickly. The mages will summon an Atronach or bind a Hagraven should they feel the need to do so, and can heal themselves if their health is low. They can also cast Ward and Cloak spells for extra protection if necessary, and can cast deadly Destruction spells. All of this can prove to be extremely dangerous, especially if multiple enemies are present. Lower-level Forsworn are usually on par with Bandits and Necromancers, and can be taken down relatively easily. Higher-level Forsworn however, especially Briarhearts, are extremely dangerous opponents; the soldiers can usually make quick work of their enemies at close range and are usually leveled with the Dragonborn. The mages can cast use various spells of fire, ice, or lighting, depending on the preferred element. They can be very difficult to face at longer ranges, and they can run backwards if chased, making them harder to hit with melee weapons. While the Forsworn's equipment may be weaker than the Dragonborn's, they can outnumber and overwhelm the Dragonborn quickly, which can result in extremely dangerous situations, especially if higher-level enemies are present.

The Forsworn have their own set of weapons and armor, which they typically use in combat.

Base Armor Rating: 12 points
Carry Weight: 2
Base Value: 50 gold Note: The helmet's appearance will vary, based on the Dragonborn's gender. Other than that however, the statistics will be the same.

Base Damage: 0 points
Carry Weight: 8
Base Value: 1310 gold
Effect: Wall of fire that does 50 points of fire damage per second when sprayed on the ground

Base Damage: 0 points
Carry Weight: 8
Base Value: 1234 gold
Effect: Fiery explosion that does 40 points of damage within a 15 foot radius (targets on fire will take extra damage)

Note: The helmet's appearance will vary based on the Dragonborn's gender. Other than that however, the statistics will be the same.

The Forsworn can be found in several locations across the Reach. Some are even in the Haafingar Hold.

The Forsworn can be found in these locations as well, but they won't be marked on the map, making them impossible to be discovered or fast traveled to.

These locations within the Reach do not feature Forsworn.

A fair number of books, journals, notes, and letters can be found mentioning the Forsworn. 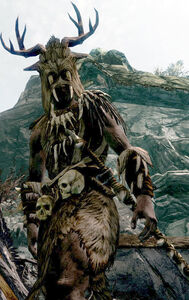